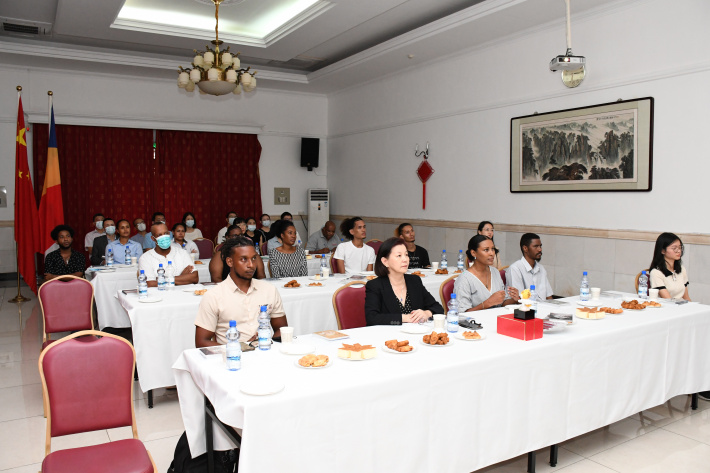 It was part of the celebration of the 20th anniversary of the establishment of diplomatic relations between China and the African Union.

The live interaction was to motivate and encourage young Africans to take an interest in aerospace activities on the African continent.

Taikonauts Chen Dong, Liu Yang and Cai Xuzhe had a live talk with African youths from Algeria, Egypt, Ethiopia, Namibia, Nigeria, Senegal, Somalia and South Africa in connected sub-venues, including from the African Union Commission in Addis Ababa, the Ethiopian capital, that were connected to the live talk while other African countries, like Seychelles, hold classes online to listen to the broadcast of the live talk.

The online class in Seychelles was held at the Chinese embassy at St Louis.

The three astronauts answered the various questions ranging from living in space, types of nutrition, bathing facilities, sleeping quarters, hobbies in space, exposure to sub zero gravity, pathway to becoming astronauts, the time it takes to orbit the earth, what earth looks like from space, the scientific and technological innovations of the Shenzhou-14crewed spacecraft and on their personal lives, among other questions. The crew also showed the students how things move through zero gravity onboard.

The taikonauts were sent to the China Space Station in June of 2022 for a six-month mission. In late July, they entered ‘Wentian’, the first lab module that docked with the station. So far, they have conducted multiple life science experiments in micro-gravity and had their first spacewalk.

From the African Union Commission in Addis Ababa, the head of mission of China to the African Union, Ambassador Hu Changchun, said under the impetus of ‘La Ceinture et la Route’ (Belt and Road) Initiative and the China-Africa Cooperation Forum, space cooperation has become a strong point in promoting comprehensive strategic cooperative partnership between Africa and China.

He added that the diversified exchanges have yielded abundant fruits, especially in the manufacture and launch of satellites, the construction of aerospace infrastructure, the sharing of satellite resources, the training of engineers and joint research. Since 2000, China has trained more than 300,000 African talents in various fields and provided a number of scholarships for students from the mainland.

“Today's event once again testifies to the determination of China and Africa to climb the scientific and technological heights together,” Ambassador Changchun said.

There were also words of praise for China, from the Commissioner for Education, Science, Technology and Innovation of EU, Professor Mohamed Belhocine, on the initiative to allow young Africans to experience live space interaction.

Ambassador Guo later explained that the live event in the country serves as one of the series of activities initiated by the Chinese embassy for China Alumni Association in Seychelles most of whose members have had the experience of studying in China.

She noted that more activities such as movie watching, seminar, sports competition, etc. will be held in the future.

Students who are studying or have studied in China are welcome to participate by contacting the Chinese embassy in Seychelles via its emailchinaemb_sc@mfa.gov.cn

“It was a very interesting event to witness given that it is the first time such an interaction takes place where young Africans can communicate live with astronauts in orbit. It’s an inspiration for me as I don’t know if I will be able to one day go there,” said Juliette Zelime, an artist who studied art in china for seven years.

“The session was very informative and it’s today that I learned on the project by China to bring the link of aerospace to young Africans who are interested. This will help more young Africans to take initiative in problem solving and I think it’s a thriving way forward to develop the capacity of young Africans,” said Tiran Leon, who graduated in Chinese language and Maths in China. 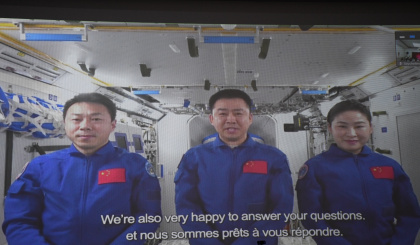