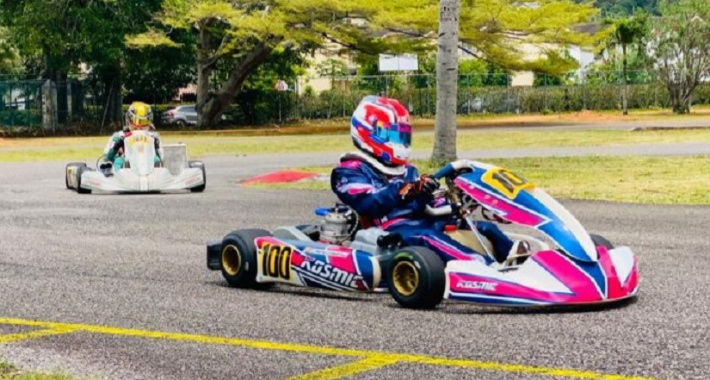 Last Sunday’s Senior round eight for the Masters and Intermediate class proved dramatic as well as being a defining moment in the championship for the leading drivers.

Championship leaders in both categories, Liza Rene-Cosgrow in masters and Fabio Williams in intermediate each took victories which now put them in the driver’s seat towards their respective championship titles.

In the Super quick 125cc masters class, the day’s outlook was going to be where drivers would have turned up with the main intention to produce the best result they can, as with only two rounds of the championship left, and more importantly, a good points haul would go a long way towards the title.

However, the day progressed, with some falling by the wayside.

Having taken pole position in qualifying, Rene-Cosgrow won a close pre-final from Dave Rene, but Marc Delcy, who was among the main challengers, blew his motor midway and had to drop out allowing Rennick Bonnelame to take a good third.

Sadly, Steven Rosalie could not get his engine to fire and had to watch from the sidelines.

It was a final that Dave had to win to claw back vital points and stand a chance to snatch this year’s championship lead.

Dramatically it all went sideways in a matter of metres, from the start when Rennick, who started from third, ran into the first sharp bend after coming in too fast losing control and spinning.

Rennick crashed into Dave, who hit the barriers.

Luckily, Dave managed to get back on track and tried to chase down Liza, who had now disappeared into the lead and paced herself to the flag but also posting the fastest masters time of the day (33.852 seconds).

With Sunday’s win Liza’s passage to retaining the masters title is now easier as she now holds a 14-point lead on Dave, with Marc dropping further back 63 points in arrears.

However, the incident shows that anything can happen in this game.

The Intermediates class was less dramatic, but Fabio Williams put up an impressive drive to take another win and also consolidated his championship lead.

Having started from pole position, he came under pressure from Denilson Melanie, Dean Maillet and Carlos Quatre at the start, but after a few laps, he had opened a gap, which he extended to the flag.

Denilson chased hard for second and in the process set the fastest intermediate lap time of the day of 43.800 seconds, while Dean finished a close third.

Jean-David Melanie took a good fourth, while Carlos dropped down to fifth with the hard charging Christian Bastienne sixth.

Eric Maillet, who was last at the start, clawed his way up to take seventh, with Terence Anderson taking eighth, while Mitra Labrosse finished a lonely ninth.

Fabio now has a 13-point lead over Dean Maillet, while Denilson Melanie is 36 points back.

Meanwhile, the Seychelles Karting Association (SKA) received a donation from the parents of Shawn Ah-Thew, the young Seychellois karter living in Botswana and who took part in the junior round two weeks ago.

The family was happy with the warm welcome they received from the SKA, and hopes that the donation would go towards the development of both karting and the youngsters in this sport in Seychelles.

In a small ceremony at Champions Park Raceway last Thursday, chairperson of the SKA thanked Mrs Ah-Thew, noting that the association is proud to have hosted the young Seychellois talents.

Both Shawn Ah-Thew and Sasha Bonnelame, who also took part in the races, were present at the ceremony and they have been invited back to the track whenever they are in the country.

The SKA commends them for their continued support towards the boys racing development. 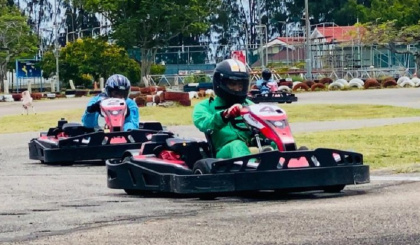