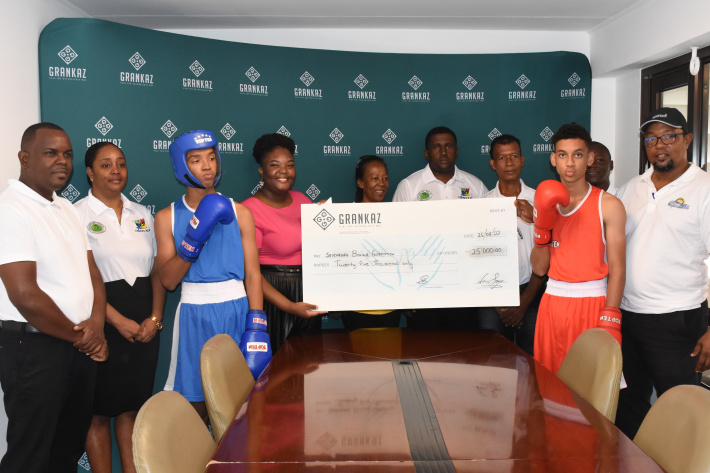 Ms Rachel handing over the cheque to vice-chairman Bonne

To commemorate the International Day of Boxing which was on Saturday, local private company Land Marine Limited which provides stevedoring, shore handling and specialised transport services at Port Victoria, along with entertainment centre Gran Kaz, have lent a hand to Seychelles’ boxing.

Land Marine Limited have given the Seychelles Boxing Federation (SBF) a batch of equipment which will benefit mostly the federation’s plan to encourage more female to join the sport, while Gran Kaz handed over a cheque for R25,000.

Ms Rachel said as a proud promoter of sports in Seychelles, Gran Kaz is very happy to support boxing, driven by the company’s tagline which is ‘Play the Seychellois Way’.

She added that Gran Kaz values the impact that sports bring to our community, and they hope that the contribution will help the SBF to attract more people to boxing.

Other than presentations, to commemorate the International Day of Boxing, seven bouts were on the programme, giving young local boxers the opportunities to showcase their talents and also to assess their improvements in the sport.

The young boxers competed in the 54kg, 57kg, 60kg, 64kg, 67kg and 71kg categories, while the competition was graced by the presence of two of the sport’s local veterans – Michael Pillay and Selwyn Medor – who were among the best during their boxing days.

In the first bout on Saturday (54kg), Mihaell Saloim who is trained by Roland Raforme, defeated Sheldon Benoit who trains under the guidance of Gerry Legras 2-1, while in the second bout (67kg) Marvin Both who trains with Rival Payet defeated Dario Victor who trains with Legras 3-0.

Troy Joubert – trained by Payet – was the winner of the third bout on the programme (60kg), defeating Jacob Malbrook who trains with Raforme 3-0.

The fourth bout was an exhibition one between Dachill Fanchette and Dylan Vidot who both trains with Payet, and for that, no winner was named.

Bout number six of the day was between Michael Tabbitt who trains with Raforme and Russel Victor who is a student of Legras.

After a very entertaining bout, the judges decided that Victor threw in some extra element to win the 57kg contest 2-1.

In the 64kg category, Mohamad William was up against Marrick Sinon – both of whom train with Legras – with the former winning unanimously 3-0.

The most exciting bout on Saturday featured Nichol Bamboche (Legras) and ex-track athlete Jovanie Bouzin who practices his new calling with coach Payet.

Both pugilists were clearly one step above the rest who performed on Saturday, and their performances sent the small crowd present wild during the 71kg contest.

At the end it was Bamboche who was declared the winner 2-1.

Commenting on the performances of the young pugilists, both Messers Pillay and Medor congratulated them, noting that there is a lot of potential in them.

Mr Pillay said the fact that they are fearless and had the courage to enter a boxing ring is proof enough that they were made for the sport, while the biggest task ahead is to equip them with proper techniques, but most of all with all the necessary requirements of the sports, including discipline.

As for Mr Medor, he also agreed on the available potential, but however noted that the boys need to work on the proper balance between offence and maintaining their stamina.

He said he observed most of them coming out all guns blazing; throwing punches right, left and centre, before shortly running out breath.

This, he said, is the main area that should be worked on.

The competition was held between August 17 and August 30 with 11 champions crowned and the host country topping the medal table.

International Boxing Day first took place in 2017, and after that, fans, athletes and stakeholders alike were encouraged to come together to celebrate boxing every year on July 22. 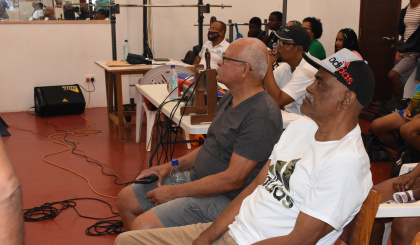 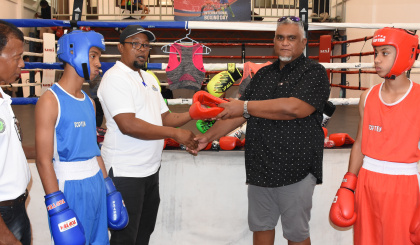