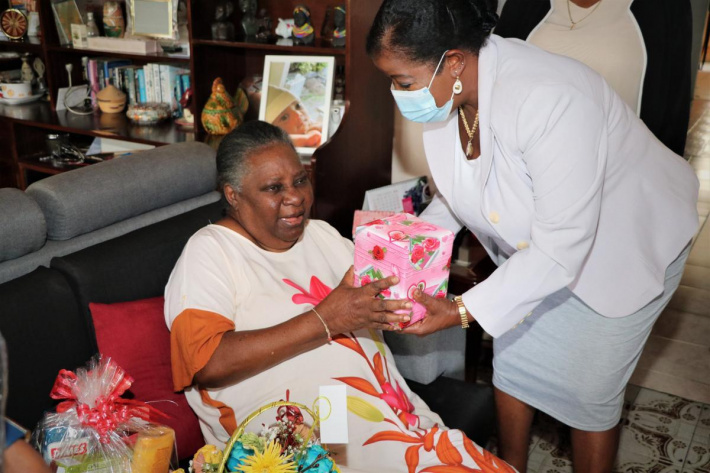 Described by many as an aspiration for Seychellois women and a great leader, Florence Benstrong sadly passed away yesterday morning.

She dedicated her life to her country and she played a big role in the lives of many, mainly when she was the director of the NYS.

Upon hearing of the passing of Mrs Benstrong, many compatriots expressed their condolences on social media and other platforms.

President Wavel Ramkalawan has sent the following message: “On behalf of the people of Seychelles and on my personal name, we express our deepest condolences to the Benstrong family as they mourn their beloved Florence. Her many contributions to the development of the country is well noted and the nation appreciates the leading role she played wherever she worked. We mourn yet the passing of another valued citizen. May her soul rest in peace.”

Former President Danny Faure also shared his message: “Deeply saddened to learn of the passing away of Mrs Florence Benstrong. She was a great lady with a big heart who played a significant role in nation-building through her many years of service in education, as MNA and the first Mayor of Victoria. She will be fondly remembered by many throughout our country, and especially by past students of the NYS and the people of Mont Fleuri. May she rest in peace. Deepest condolences to the Benstrong family and relatives.”

Marie Flora Ben David, a former student at NYS remembered how strict and disciplined Mrs Benstrong was. “Under her leadership many of us now have an accomplished life. She used her voice to the max to make us know if she was content or sad with our behaviour. As a past student at the NYS I can say that she was a great leader. Yes, when she addressed us at Port Launay, the authority in her voice...do not mess. When it comes to the concept of discipline better behave well well...she will be greatly missed. Sincere condolences to the family. May her soul rest in peace.”

From the office of the Mayor: “It is with profound sadness that we have learned of the passing away of Mrs Florence Benstrong. Mrs Florence Benstrong was the first Mayor of Victoria and she served in this office for ten years, from January 1997 to July 2007. During her term in office she signed various Twinning Agreements with other cities and municipalities in Mauritius and organised exchange visits and represented the City of Victoria at international meetings. Mrs Benstrong was the first Mayor of Victoria to sit on the United Cities and Local Government (UCLG) Africa council and also became a member of the Association Internationale des Maires Francophone (AIMF). Mrs Benstrong has contributed a lot to the development of the City of Victoria and we sadly mourn the passing of a prominent and exemplary citizen. On behalf of the Office of the Mayor of Victoria, we would like to express our deepest condolences to the family of the late Mrs Benstrong. May her soul rest in eternal peace.”

In its message the United Seychelles (US) party writes: “It is with deep sadness that we learned of the passing of Mrs Florence Benstrong earlier this (yesterday) morning. Mrs Benstrong was a staunch supporter and ardent believer in the principles of our party. As an educator, she will be remembered for her instrumental role in the alphabetization programme in the 1980s, which contributed immensely towards improving the literacy rate in Seychelles, and also as the first director of the National Youth Service (NYS). Mrs Benstrong also represented her district of Mont Fleuri as an elected member of the National Assembly for the SPPF party and served as first Mayor of Victoria. She was a fearless woman who was always ready to take on challenges. She was an inspiration for Seychellois women.

“The United Seychelles party would like to express its deepest condolences to the children and family of Mrs Benstrong in their moment of grief. We remain forever grateful for her contributions to our party and our country. May her soul rest in eternal peace.”

For its part the National Assembly of Seychelles “takes note of the passing away of former parliamentarian and also former Mayor of Victoria, Mrs Florence Benstrong.

“Mrs Benstrong served for a 5-year period in the first National Assembly as an elected member for the Mont Fleuri district starting from July 30, 1993 and again during the 2nd Assembly, this time as a proportionally elected member. Mrs Benstrong served as a teacher before taking up a political career. “The present National Assembly pays its respect to her service to the country in both capacities and a tribute to her contribution as a parliamentarian.

“On behalf of the present National Assembly, Speaker Roger Mancienne expresses condolences to the Benstrong family.”

Seychelles NATIONpresents its sincere condolences to Mrs Benstrong’s family and friends. It was an honour to have known such a great lady.