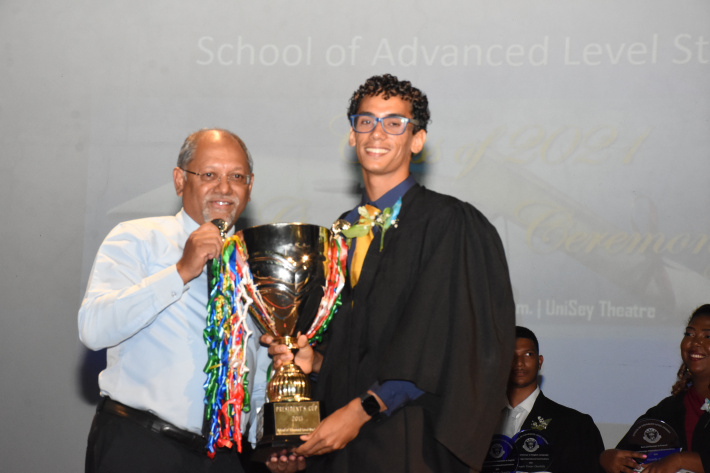 Jean-Pierre was presented with his award by Vice-President Ahmed Afif, in the absence of President Wavel Ramkalawan who is on overseas mission.

This was during a ceremony at the auditorium of the University of Seychelles, Anse Royale yesterday afternoon.

The award goes to the student who has not only done well academically but usually excels in other extracurricular activities. However, due to Covid-19, those activities were not held for the past two years and the students were judged on their character, attitude, behaviour and level of discipline.

Jean-Pierre had earlier won the Best Performer awards for two subjects, namely Biology and Computer Science making him the Second Best Academic Performer and was also judged on his personal attributes as well.

Speaking to Seychelles NATION, an emotional Jean-Pierre said he was shocked, yet very proud of this great achievement.

He said he does not remember doing anything out of the ordinary but was consistent with his attendance and helpful towards others.

The young man, who was working with the Marine Conservation Society of Seychelles since he left Sals, is leaving the country next week for the United Kingdom to accomplish his lifelong dream, and that is to study marine biology at the University of Southampton.

“My father is a fisherman and since a tender age all I wanted to do was be in the water. I learned how to swim on my own, so from there I could not stop thinking about it. And with these things happening in the oceans, pollution, coral bleaching and global warming, which is really disheartening to see, I just want to help in any way I can,” said Jean-Pierre.

He advised other young people joining Sals to persevere.

“Go for it if you have the potential, and I bet you do because everybody has it. So you just need to put in a little bit of effort. I had learning difficulties when I was young but one day my step-mother sat me down and said ‘you’ve got this’ and since then I kept pushing until I got to this stage in my life,” he concluded.

Other than the President’s Cup, he also won other prizes, such as laptop, vouchers and cash prize and a scholarship sponsored by the ANHRD (Agency for National Human Resource Development).

The 19-year-old from Cascade said although the subjects were quite tough, he persevered.

“I put in the extra effort and I saw the results and today I am very happy and proud of myself,” he told Seychelles NATION.

Bixente also won the Patrick Lespoir Award which was being presented for the first time in honour of the former A Level lecturer, Patrick Lespoir who passed away in a tragic boat accident few years back.

According to Sals principal, Elaine Larue, this award will be presented annually and will go to the best performer in the math subject.

It was Mr Lespoir’s sister who had approached Sals to sponsor the award in her brother’s name along with Patrick’s friend.

During yesterday’s ceremony, Mrs Larue also announced the launch of the Alumni Committee, which is aimed at bringing together former Sals students.

She said the alumni have so much to offer and it was important that they regroup and share their experience with new students.

“We want them to be part of what Sals is trying to do, they can come back and help those who are struggling or who are yet to decide what they want to do in life. So we want them to come back as professionals to help out, hold motivational talks and share their experiences basically,” said Mrs Larue.

She added this will also help give the school a better image as well “that they do not see the school as just a phase, but as a memorable experience,” said Mrs Larue.

Other awardees were Chilufya Chisambo for third best academic performer, whereas the students who had scored 30 points and above were Neddy Petrousse, Bixente Labaleine, Maeve Bonte, Kwong-Wing Pierre and Jean-Pierre Barallon.

As for best performers by subject, the other graduates were Maeve Bonte for Biology alongside Jean-Pierre Barallon, Christine Lungu for Geography. She also won the Principal’s Award.

Marcus Samson was the best performer for History. He was also awarded the SNYC Award – Making the Impossible Possible.

Angelo Ponan-Charlette was the best perfomer for English language and for English Literature. He shared the latter with Adrian Hall. 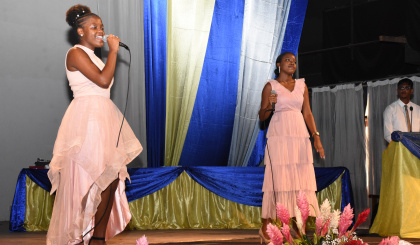 A performance during the ceremony 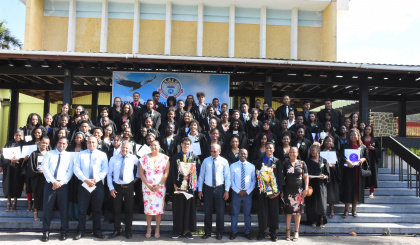 The graduates in a souvenir photograph with guests 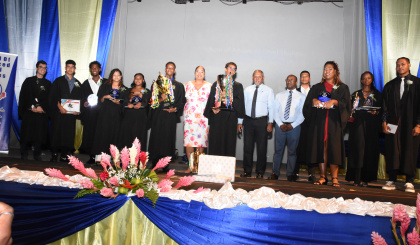 The best performers with guests

National assessment of children prior to pre-school and crèche |10.09.2022

Free breakfast for registered primary, secondary students as from September 5 |02.09.2022