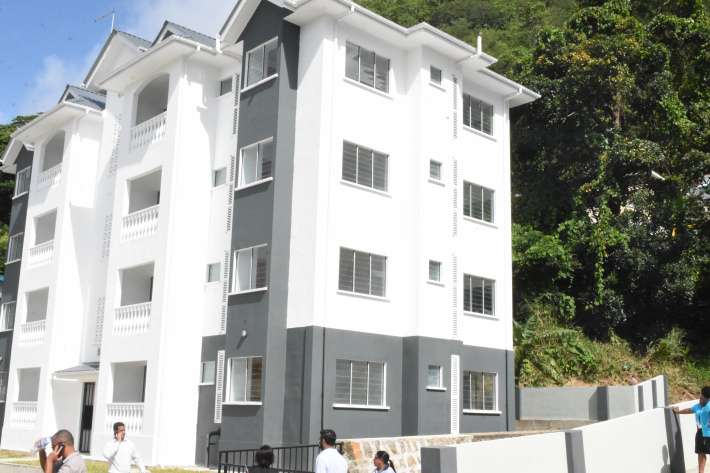 A partial view of the new housing estate

Sixteen families have received the keys to their new homes in Vilaz Delo Ladal, a new housing estate that was officially opened yesterday in the district of Bel Ombre.

It was President Wavel Ramkalawan and the Minister for Land and Housing, Billy Rangasamy, who had the honour to unveil the commemorative plaque to officially inaugurate the new estate comprising 16 three-bedroom units built in two separate blocks of four storeys.

The housing units were built by Qingjian International at a total cost of R21.5 million (R1.35 million per apartment) with 38% of the project cost attributed to infrastructure cost.

Construction work on the units started in the first quarter of 2019 and was completed on August 6, 2022.

Apart from the new tenants, also present to witness the official opening of Vilaz Delo Ladal were Vice- President Ahmed Afif; the Minister for Education, Dr Justin Valentin; principal secretaries; the district’s elected member in the National Assembly, Honourable Sandy Arissol; the district administrator, Tahiri Laurencine and representatives of Land and Housing and Property Management Corporation (PMC), among other invitees.

Vilaz Delo Ladal housing estate derives its name from a nearby running stream. It is situated some 150 metres uphill behind the Bel Ombre district administration office.

In his speech for the occasion, Minister Rangasamy welcomed the new residents of the housing estate and called on them to take ownership of their estate, to prevent the occurrence of social ills and to live in harmony with one another, including with their surrounding neighbours.

He said the local authorities will not tolerate any anti-social activities and action will be taken against perpetrators.

He also stressed on the need for them to continue to pay their housing contributions so that others on the housing waiting list can get the chance to benefit from what they have benefited.

He noted though that he was confident they will all honour their engagement and will respect the tranquillity of the neighbourhood.

Minister Rangasamy said that government will continue to remain committed and will invest in smart and sustainable housing programmes for its inhabitants especially those who are actively making their contributions to the housing saving scheme to own their own house.

With regard to the construction of the housing estate, he explained that Vilaz Delo Ladal has encountered various delays due to the complexity of the site with various water sources, which required alterations, site preparations (rock packing), the foundation designs and retaining walls.

He noted that despite the various delays due to the complexity on site, he was happy that the project was completed to help the sixteen Seychellois families who have been waiting for a long time to own their homes.

In a vote of thanks on behalf of the new residents, 41-year-old Chantal Confiance thanked the government for making their dreams to own a house come true and she promised that they will work to make their housing estate exemplary to other housing estates.

She also called on her fellow tenants to live in peace and in harmony and to honour their obligations towards repayment of their houses.

The single mother of two (17-year-old boy and nine-year-old girl) who had been waiting for 21 years for a house, later said that she was very happy that her dream to own her home has finally come true.

She said she had given up on ever getting a house she had applied for when she had no children, until recently when she received a letter that she was being accorded with a house in her district.

She had been living at various places in the past and her mother’s home at Bel Ombre was her last place of residence.

Most of the tenants who talked to Seychelles NATION said they were satisfied with their living quarters and happy to be owners of their home which they have long been waiting for.

At present, Bel Ombre has over 94 active housing applicants and this project has allowed the ministry and the district to relieve some pressure on the demand for housing.

The minister stated that given the district’s difficult terrains for housing projects, and while the technicians study their potentials for housing development, the ministry will be starting a two-bedroom project in the month of September 2022 at Corsaire.

He added that a second housing project in the pipeline at the Ex-Khashogi will commence later after further analysis.

At national level, Minister Rangasamy said by the end of 2022, the ministry will be launching various housing projects in various districts with the financial support of the government and from friendly donor countries. 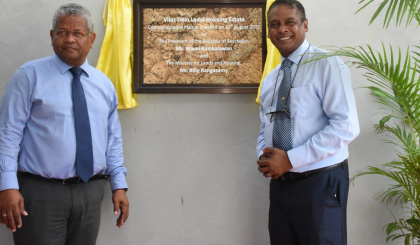 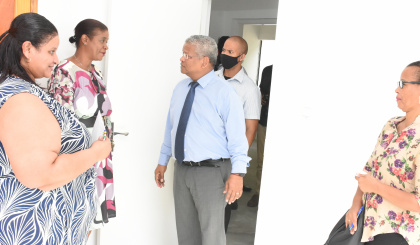