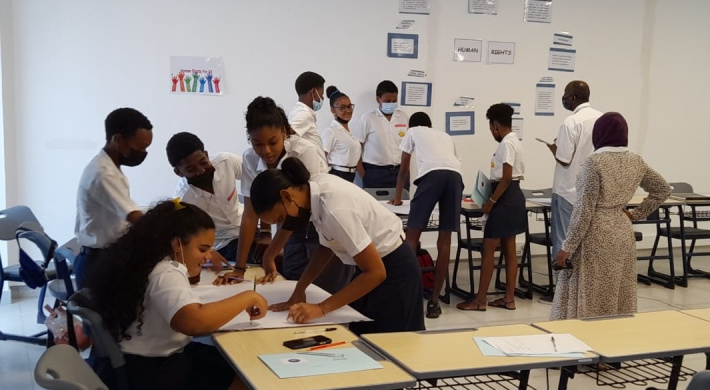 Students who were following sessions on human rights said they hope this could be included in their school curriculum, as it was an important aspect of everyday life.

They made the comment after following the sessions during the week, at the Human Rights Information and Legal Centre at Dreamgate Complex, Ile du Port.

According to the Commission, they are aimed at increasing human rights promotion and protection in Seychelles, and are funded under a three-year European Union project, worth €210,000.

Speaking to Seychelles NATION, the project’s coordinator, Andy Jean-Louis, said this was lacking, and one crucial task is to facilitate a sound understanding of democracy, application of rule of law and human rights, concepts of rights holders and roles of duty bearers across all sectors.

He said through the sessions they want the students to learn about the topic in its entirety and then pass on the knowledge to their classmates.

“The project is aligned to Programme 1 of the Seychelles Human Rights Commission, whose purpose is to create a national culture of human rights, where tolerance, equality and mutual respect thrive, through research, creating awareness and making recommendations to inform people of their rights,” said Mr Jean-Louis.

The commission’s senior education and training officer, Sophie Lagrenade, who facilitated the sessions, said the topics covered included the origin and importance of human rights, human rights under Seychelles constitution as well as rights covered in the Universal Declaration of Human Rights.

“I was very impressed with how much the students knew already about human rights. They have a good grasp of the subject, were very interested in learning more and they participated actively,” said Ms Lagrenade.

Yuginie Aglae, one of the prefects from Plaisance secondary school, who attended Thursday’s session, said she felt there was a need to talk about the subject and to teach young people what it means to have rights and how to protect those rights.

“In my case I have learned more about people’s culture and values. I knew it was there but I did not have much details about how important it was. The facilitator explained that as a Seychellois and an individual, we have the right to express ourselves and our culture,” said Miss Aglae.

Another prefect from Plaisance secondary school, Hadrian Adrienne, said students know some of their rights but not in details, and the session was therefore very useful as it went in depth about the subject.

“As a young person I feel that our rights are respected to some extent, but this is not emphasised at school level. If we are not taught about human rights, we will not know our rights and these will get violated,” he said.

They said they hope the topic could be taught at school.

“We need to know more about human rights so I would suggest the topic is included as a normal subject in the curriculum where we can learn about it,” said Adrienne.

For her part, Miss Aglae also suggested that the topic should be introduced in their classes “but in the meantime as a right holder I will be promoting this in my class and in my society”.

Ms Lagrenade said students’ feedback from the four sessions so far are being taken into consideration.

“We are in discussion with the Ministry of Education to include human rights in the curriculum because according to the students, this is not something they are reading or learning about in depth,” said Lagrenade.

The Seychelles Human Rights Commission will be travelling to Praslin next week to conduct sessions with Praslin and La Digue students.

The sessions will also be held with PSE teachers, head teachers and deputy headaches later this month.

Other groups that will be targeted during the three-year project are government officials in pre-service and service including law enforcement officers, citizens as well as vulnerable groups.

So far the commission has conducted sessions for the media, prison and probation officers and civil society organisations.

The accompanying photos show some highlights of the sessions with the students on Mahé this week. 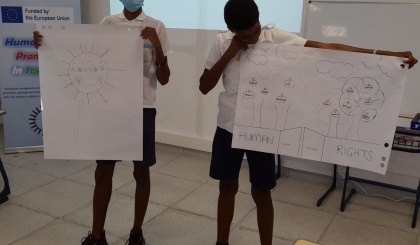 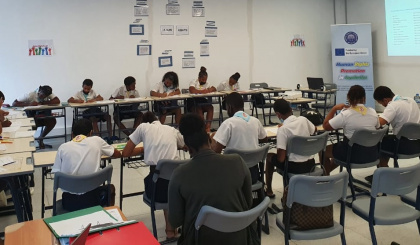 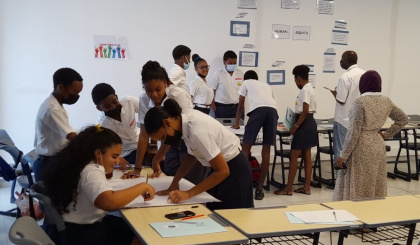 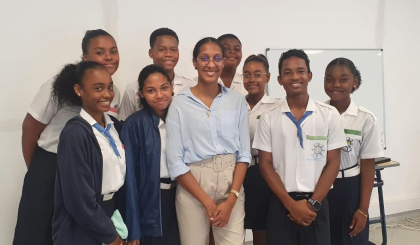