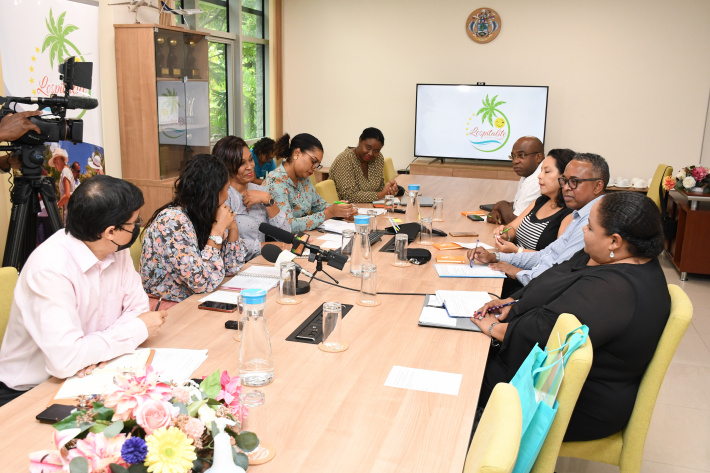 The ‘Lospitalite’ campaign launched as part of effort to boost the competitiveness of the local tourism industry and promote Seychelles as a destination, has achieved its goals, according to a government official.

The principal secretary for Tourism, Sherin Francis, announced the achievement yesterday at an extraordinary meeting of the High-Level Committee, at the Botanical House conference room of the Tourism department.

Officially launched in late January, the campaign has been active for six months now and the meeting was organised with the purpose of discussing the progress made during this time.

“I think you all can agree that during these six months, we have been able to succeed in our objectives. We have been able to give it resources and attention, and of course a lot of work has been done through sub-committees that you all formed part of,” said PS Francis, noting that in all there had been three goals that the campaign had focused on attaining: Sensitisation, Education and Recognition.

She explained that their aim for education was attained through the formation sessions they held for service in general, as well as the launching of ‘Lospitalite’ clubs in schools.

As of now, 37 schools out of 42 schools have adopted the clubs and almost all schools have already started the campaign’s programme, including those who have not officially launched the club yet.

She also mentioned that four batches of staff from the Immigration department, Air Seychelles, Seychelles Revenue Commission (SRC) and the Tourism department have undergone the reform training. A new batch from the Seychelles Civil Aviation Authority (SCAA) is expected to follow the same training soon, followed by staff from other organisations later on.

“This campaign is receiving great engagement from our partners in the industry and the public in general,” added Ms Francis.

She also remarked that the public have shown that they are conscious of what the campaign is about and what it is trying to achieve, and are lending a hand to reform the services offered in the tourism industry.

Also present for the meeting were the director general for Destination Planning and Development, Paul Lebon; the chairperson of the campaign, and active members of the High-Level Committee.

Mr Lebon gave an update of the programme since its launch and on the upcoming award ceremony for the businesses that participated in the service excellence programme. The members of the High-Level Committee also clarified any questions they had and discussed the different updates.

The High-Level Committee also announced that a re-launch of the version 2.0 of the campaign will take place on October 2, as well as the award ceremony which will contribute to achieving their aim of recognition.