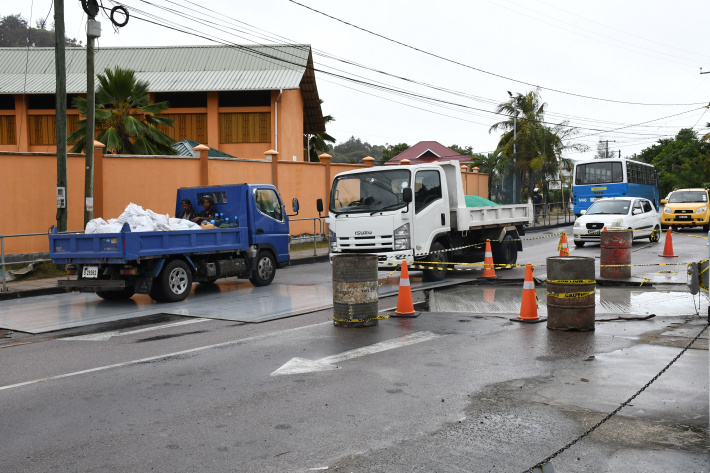 Motorists are being urged to exercise caution when using the road where work is underway to repair a damaged culvert at Anse Aux Pins (Photo: Joena Meme)

Work is underway to repair a damaged culvert crossing the main road near the Anse Aux Pins bus terminal.

The culvert, which was damaged last week, has created some inconveniences to motorists using this road daily and the Seychelles Land Transport Agency (SLTA) has since started repair work on one part of the bridge and covered the other half with metal sheets to allow motorists to go by.

Meanwhile SLTA is strongly advising motorists to use an alternative route if they are using heaving vehicles.

During a visit on site yesterday, Naddy Samson, project manager at SLTA, explained that the bridge was damaged as a result of a fault in the structure.

“One part of the bridge had two slabs and these were broken. Now we have put concrete fillings. We hope to repair the other side.”

The public also complained about the absence of signs warning them about ongoing work ahead.

Mr Samson said these concerns are being addressed but he is also urging motorists to take extra precaution when approaching the area and to follow all instructions given on site.

While at the site, we could notice the number of big lorries carrying construction materials and the question that crops up is are there any signs on our roads indicating the tonnage they can support?

Mr Samson shared there are exercises being conducted every year at SLTA where all bridges are being evaluated.

“SLTA was already aware of the problem and we decided on some measures to be taken, but unfortunately the bridge broke before due to an increase in traffic. Already a temporary support has been added to the other half of the bridge until we are ready to undertake work on the other half. This construction part is going through a tender process and last week we received the quotations. This week we will decide on the contractor.”

Mr Samson explained that once the contractor starts working, they will have to wait for 28 days to place the new slabs and this will be done on site, may be in the fourth week of September. 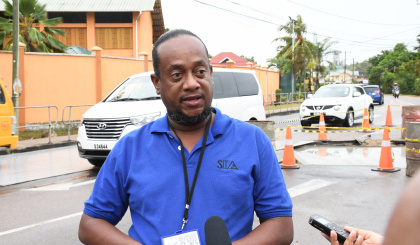