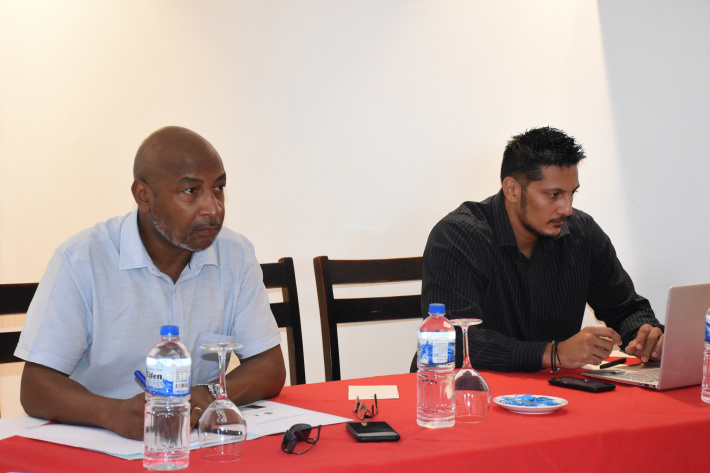 The launch of the meeting (Photo: Kurtrine Albert)

Fishermen, representatives of different fishers associations as well as other stakeholders involved in coral reef restoration, gathered at the Coral Strand Hotel recently for a meeting during which they were briefed on progress and challenges on an ongoing Food and Agriculture Organisation project launched at the end of last year.

The project being led by the Ministry of Fisheries and the Blue Economy, aims to enhance livelihoods, food security and maritime safety through increased resilience of the fishing communities dependent on coral reef fisheries in the African coastal countries of the Indian Ocean.

Countries selected for the project whose cost is estimated at USD 4,400,000 are Comoros, Kenya, Madagascar, Mauritius and Seychelles.

As per the term of reference of the project, each country is responsible for organising a National Steering Committee (NSC) that will meet once or twice a year for the entire project period which is three years.

The recent meeting was to validate the first NSC report and present the annual work plan and budget for 2022, present the activities undertaken by the project team since November 2021, present the challenges and opportunities among other related matters.

The principal secretary for fisheries Roy Clarisse stated that the project is to assist countries in the region to protect coral reefs and restore them so that the fishermen that use these reefs can continue to fish sustainably.

He further remarked that while helping in the restoration of the coral reefs, they are also looking at how to reduce pressure on the corals by placing FADS that attracts other fish in the period when fishers cannot fish.

PS Clarisse said this is one of the methods they are looking at to help fishers and also provide them with safety equipments. To note, the Ministry of Fisheries and the Blue Economy is not restoring the coral reefs but is aiding the projects involved in coral restoration.

Seychelles has chosen three sites for coral restoration under the project. One   is a site around Silhouette use by fishers from Glacis and Bel Ombre. The second is at Anse Royale and PS Clarisse noted that even if there is not a lot of artisanal fishing taking place there, a lot of tourism activities are taking place and they affect the environment and the reefs. The third site is around Curieuse and even though it is a marine park, quite a few boats go through and their anchors   damage  the corals.

Dr Ameer Ebrahim the national project coordinator noted that this second national steering committee meeting was important to validate the work being done and provide the different partners and stakeholders an opportunity to give their inputs to move the project forward.

He noted that fishers representative from communities that will benefit from the project were also present for the meeting however not all of them. He added that it was important for them to be present so that they can understand what is being proposed and give their inputs. Out of the over USD 4million earmarked to be shared among the countries mentioned, Seychelles  is getting  a share of slightly less than a million dollars to push for the project.

Dr Ebrahim noted that it was an easy choice for them to be part of the survey as they already had an established system.  He added that for Anse Royale the project will get the assistance  of MCSS. 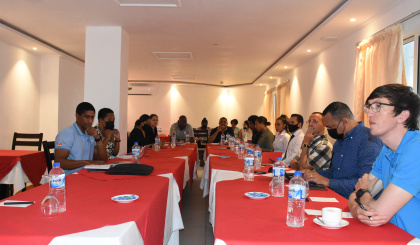