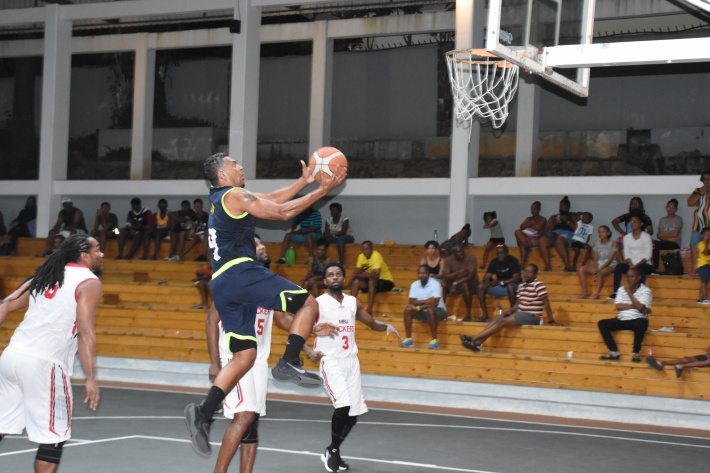 With the first round of men’s division one completed, Bel Air-based Baya are now leading the standing following their 76-60 win over bottom-placed MBU Rockers on Saturday at the Victoria Gymnasium, relegating PLS Hawks into second position.

Baya are now on 11 points from five victories and a single loss out of six matches.

Prior to the match, Baya were occupying the fourth place overall, behind Drifters and Beau Vallon, who along with previous leaders PLS Hawks were on ten points – from four wins and two defeats out of six matches apiece.

However, Hawks had the upper hand due to their superior basket difference, having scored 449 baskets and conceded 366, while Beau Vallon Heat have scored 439 and let in 359.

As for Drifters, they have scored 405 baskets and conceded 402.

Beau Vallon Heat are now third, while Drifters have move down into fourth position.

Against MBU Rockers, Baya started the match on a rather slow pace, with both teams committing several mistakes, ending the first quarter a low 17-14 score in the advantage of the Bel Air side.

In the second quarter, Rockers who are yet to taste victory in the league came out of their shells, outscoring Baya 20-16, for a slight 44-33 lead at half-time.

In the third quarter, Baya shifted to a stronger gear and with a more organised playing strategy, scoring 24 points, while Rockers add in another 14, concluding the third quarter 57-48 in favour of Baya.

In the fourth and final quarter of the match, both teams pushed forward, with Baya looking to extend their lead, while Rockers huffed and puffed to collect their first league win.

At the end, Baya scored 19 points, while Rockers managed only 12 to seal the match on 76-60 victory for Baya, pushing them on top of the table.

Okafor Ebuka scored 20 points to lead the scoring for Baya, while Daniel Hoareau had the hot hand for Rockers with 12 points.

Lower on the men’s division table, Mont Fleuri Dawgz are presently fifth on eight points from two wins and four defeats out of six matches played, scoring 308 points and conceding 382.

One spot below in the sixth position are Premium Cobras who have collected eight points from two wins and four defeats out of six matches played.

Tail enders MBU Rockers are currently on six points after six defeats in as many matches, scoring 237 points and conceding 306.

In the women’s league, Anse Etoile Stars have concluded the first round of the season top with maximum six points from three wins in as many matches, scoring 160 baskets and conceding 99.

B Challenge are second on five points, after two wins and a defeat from three matches, scoring 117 points and letting in 104.

In the third spot on the league table are Mont Fleuri who have collected four points after a win and two defeats in three matches.

Carrying the weight of the league table are winless Hotshots who have collected three points from three defeats, and scoring 116 points, while conceding 160.