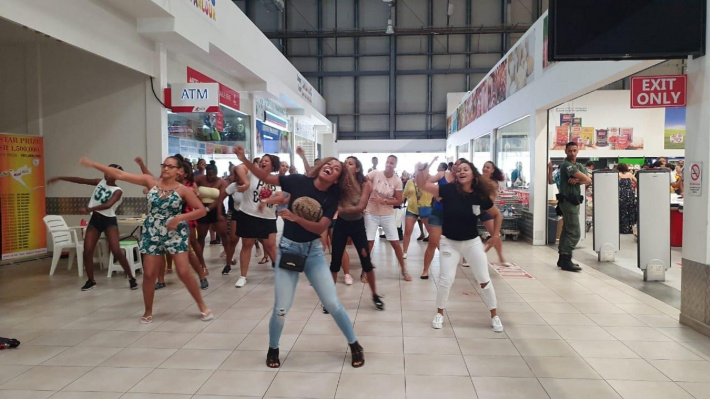 On August 31, shoppers at the Seychelles Trading Company Hypermarket, Bois de Rose Shopping Complex, were entertained by a Zumba flashmob, which took place both inside and outside the supermarket.

Three dances were performed by Samanta Servina, a Zumba instructor, along with 20 students who are regular members of her weekly classes; their performance was accompanied by one of their class favourite songs ‘Te vi’ by Piso 21.

Speaking to the Seychelles NATION, Ms Servina explained that a flashmob is when a group of people spontaneously begin to perform an act pointlessly in public for a brief period of time and then quickly disperse; the purpose of this is often for artistic expression and/or for pure entertainment.

“The Zumba flashmob therefore was something myself and my students did in the name of fun and entertainment,” said Ms Servina who added that the benefits of such an activity extend to both her students and to the community.

“At an individual level for my students, it is a great way to conquer a nerve-wracking situation, it was an opportunity for them to have some unique fun. For the community, it was a reminder that a public place is not one to be taken too seriously, as there are a group of individuals ready and waiting to bust out some moves at any time in the name of fun! I hope to inspire people to do similar activities to lighten up our public places,” added Ms Servina.

To prepare for what was their first Zumba flashmob, Ms Servina said she incorporated chosen songs from within her usual class playlist and thereafter they did small simulations, imagining that they were in a public place whilst dancing to these songs.

Speaking about the chosen location, Ms Servina explained that she and her students chose STC Hypermarket because they felt that it is the last place anyone would expect to see a group of people dancing.

She added that it also gave people a spontaneous dose of entertainment – something which she feels is highly appreciated when having to wait in queues during end-of-the-month shopping.

At the end of their performance, it was felt by everyone that the Zumba flashmob had been a success.

“It went great!” said Ms Servina. “As expected, the location was packed with families and individuals doing their end-of month-shopping. My students gave the feedback that they were nervous in the beginning (understandably) but once they started dancing, their nerves faded away.

“It was funny to see different reactions to our dance, some people seemed to be in total shock, others in delight and admiration. We were showered with applauses after we finished the flashmob.