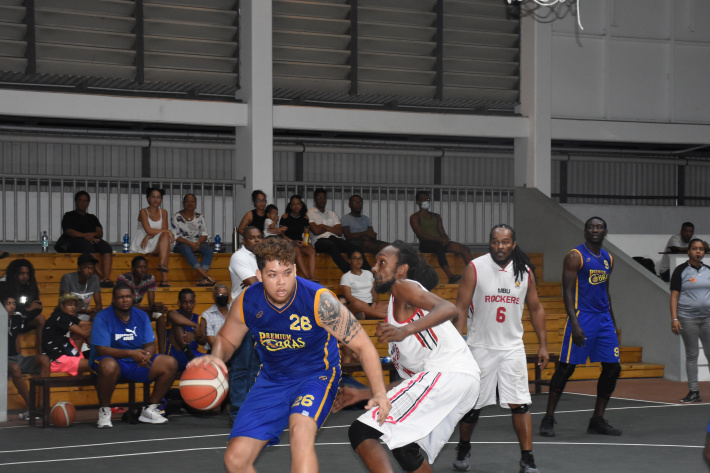 Mont Buxton-based MBU Rockers are still without a win in the league this season, with Premium Cobras adding to their misery on Wednesday, inflicting another defeat, keeping Rockers at the bottom of the table.

In Wednesday’s match, Premium Cobras showed their intentions of grabbing both points early in the match, coming out stronger to outscore Rockers 20-10 after the first quarter.

Rockers regrouped and came out better in the second quarter, adjusting both their defence and offence.

They however felt that the match officials were being biased, calling mostly against them, or not at all when they were being fouled.

For that, Rockers lost Nigel ‘Jah’ Henriette who decided to protest by walking out of the match, along with coach Alvin Alcindor who said he was also not satisfied with the level of officiating.

However, the players who decided to stay behind managed to score nine points for Rockers, while Premium Cobras chipped in another 16 to lead 26-19 at half-time.

Despite the earlier mishaps, Rockers maintained their composure in the third quarter, scoring 19 points, while Premium Cobras add in another 24 for a 60-38 advantage after the third quarter.

Still believing that they can turn the match around, MBU Rockers entered the fourth and final on a higher pace, outscoring Premium Cobras 21-19, but the latter’s advantage from the first three quarters were enough for them to cling on to, winning the match 79-59.

Alao Solomon was Cobras’ top scorer with 17 points, while captain Nigel Sinon led the scoring for Rockers with 20 points.

The results do no change much in terms of the ranking as Premium Cobras remain sixth overall on eight points from two wins and four losses out of six matches, while Rockers remain at the bottom on five points from five defeats in as many matches.