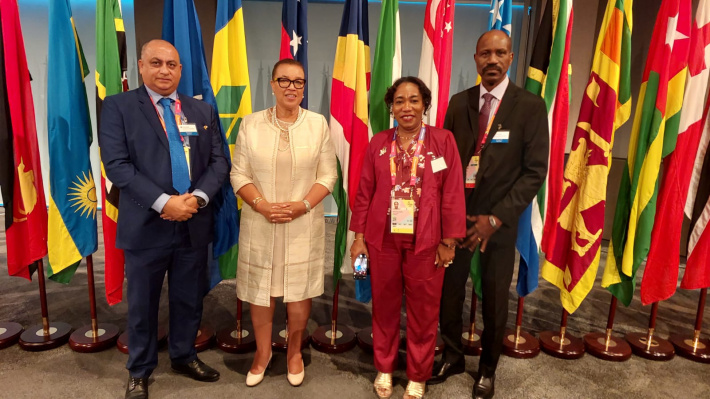 The Seychelles delegation with the secretary general of the Commonwealth, Baroness Patricia Scotland

Seychelles is seeking support from the Commonwealth in its campaign to bring home its first Olympic medal, Minister for Youth, Sports and Family Marie-Celine Zialor has said.

She was speaking at the Commonwealth Sports Ministers meeting held at the International Convention Centre in Birmingham on Wednesday where she asked for support from the Commonwealth family for our island nation to be able to achieve this challenging mission that it has set for itself.

“As one of the smallest countries in the Commonwealth and the world, Seychelles is on its quest to win its very first Olympic medal, and the philosophy behind this is that on a global level small countries like Seychelles are underdogs, and with less than 100,000 people this might even seem impossible,” she explained.

“So imagine when we win this medal how much hope we will be giving to not just the people of Seychelles, but all the underdogs of the world, and it is good to know that we can achieve these exploits through sports; making the impossible, possible,” added Minister Zialor.

She also thanked the Commonwealth team for choosing teams and topics which, she said are “so relevant and important, not just for propelling sports forward, but also humanity”.

Minister Zialor is heading a delegation comprising the principal secretary for Youth and Sports Ralph Jean-Louis and the chief executive of the National Sports Council (NSC) Jean Larue.

The 10th Commonwealth Sports Ministers Meeting (CSMM) was held under the theme ‘Creating an inclusive and resilient sports sector; enhancing the contribution of sport to the Sustainable Development Goals’.

The meeting is also a platform to advance Commonwealth policy positions and associated policy guidance on maximising the contribution that sport can make to sustainable development and proactively responding to sport’s human rights and equality issues.

Preceding the Sports Ministers’ meeting, on Tuesday, was the senior sports officials' technical meeting, while the secretary general of the Commonwealth Patricia Scotland hosted the ministers for a welcome reception.

This provided the Seychelles delegation with networking opportunities which Minister Zialor said is crucial for the establishment of cooperation for the professionalisation of sports in Seychelles.

Minister Zialor also attended the opening ceremony of the Games held yesterday night at the Alexander Stadium at Birmingham.

It was boxer Keddy Agnes and high-jumper Natasha Chetty who were Seychelles’ flag bearers at the ceremony. 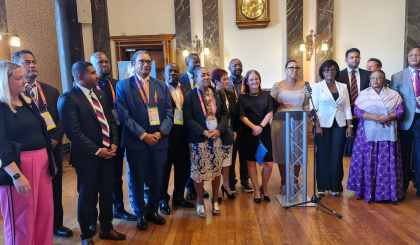