Desilting work in Victoria and Mont Fleuri completed at a cost of R3.17 million |27 July 2022 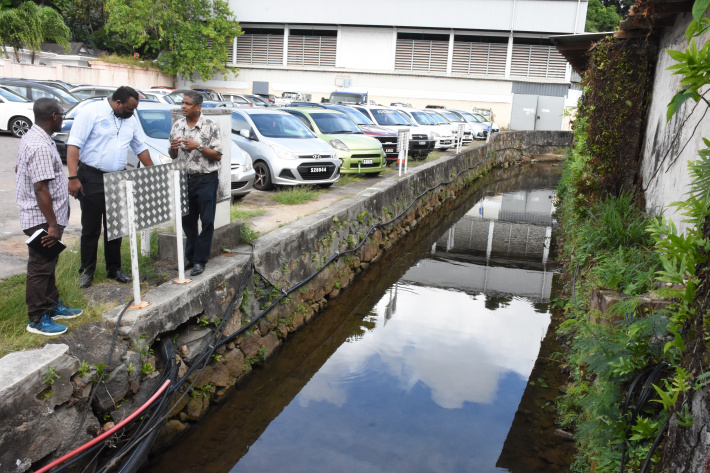 The St Louis River channel running next to the Victoria gymnasium was among those desilted (Photo: Louis Toussaint)

Desilting work which had been going on in Victoria and Mont Fleuri recently has been completed at a cost of R3.17 million.

This was announced by the principal climate adaptation officer from the department of Climate Change, Jean Claude Labrosse, yesterday after a site visit to all the rivers in Victoria and Mont Fleuri that have been desilted.

We all remember the flooding caused by a sudden heavy rainfall on March 11 and how Victoria and Corgat Estate were flooded. Immediately all stakeholders met under the supervision of President Wavel Ramkalawan and started working on the project ‘Free-flooding Victoria’.

The desilting work, which started on June 13, was carried out to increase retention capacity and water flow within these channels during heavy rainfall following instructions from the High-Level Committee chaired by the President.

Mr Labrosse explained that after the visits they will look into the constraints they encountered while implementing this project and the way forward.

“Now that the desilting is completed, the Landscape and Waste Management Agency (LWMA) will follow-up with the maintenance. The Seychelles Infrastructure Agency will also remove the non-usable structures in the rivers such as decommissioned man-holes, old walls that are degenerating etc. Utilities committee is also working with the entities responsible to put together, in a proper manner, the cables so as to prevent flooding.”

Mr Labrosse also explained that they are talking with the private owners also as it was quite difficult to work under the old bridges where special machines had to be used to desilt.

“At the beginning we estimated the work would cost R3.4 million but we were able to manage with R3.17 million. Now, we definitely look forward to having a discussion with all stakeholders including PUC and telecommunication firms to see how the cables placed in the rivers can be better managed. Obviously, this will require cost sharing.

Minister Rangasamy praised the work that has been accomplished so far and all stakeholders who have worked together to get the work done.

“Every month we have been updating the President on the ongoing work. While doing the desilting we saw how the walls surrounding our rivers are getting weaker and the Seychelles Infrastructure Agency and the Utility Committee are establishing a list of urgent work to be done on them and these will be carried out as we get the budget.”

Minister Rangasamy spoke about the work done by the Utilities committee to tidy up the cables for now as a temporary measure.

“The work that the Seychelles Infrastructure Agency is doing will help colour code the various cables and we are hoping the various companies will contribute towards this project. We will ensure that all projects done in Victoria remains flood-free.”

Minister Rangasamy shared that since taking office he has been relooking at the Victoria Master Plan so that it becomes more sustainable in the future.

“With climate change, our rivers are unfortunately being affected,” explained Mr Labrosse. “With a short spell of heavy rainfall, there need to be capacity for the rivers to disgorge the excess water. Of late we have been having short bursts and sudden heavy rainfall and rains tend to be localised and we have to make sure our rivers have the capacity to cope with the excess flow of water. A lot of work remains to be done and we hope the public will help us in keeping the rivers and the streets clean as when it rains, all garbage flows into the sea.”

Work was also completed in the Mont Fleuri district, Quebec River near Mont Fleuri school and Rochon River. Minister Rangasamy confirmed that “the bridge at Mont Fleuri does not need to be reconstructed. After desilting, there is enough space for the water to flow, but PUC still has some work to do. One good news is that we have received quotations for the Corgat Wall and it will be done in different phases. In August the contractors will be awarded with the different work they need to do. We are doing all these work at a cost, but if individuals do not stop littering the rivers, the problem will be the same. I implore all to have a proper way of disposing of their garbage especially those who live next to a river.”

The result of the work is already apparent as no flooding occurred when there was heavy rainfall in Victoria recently.