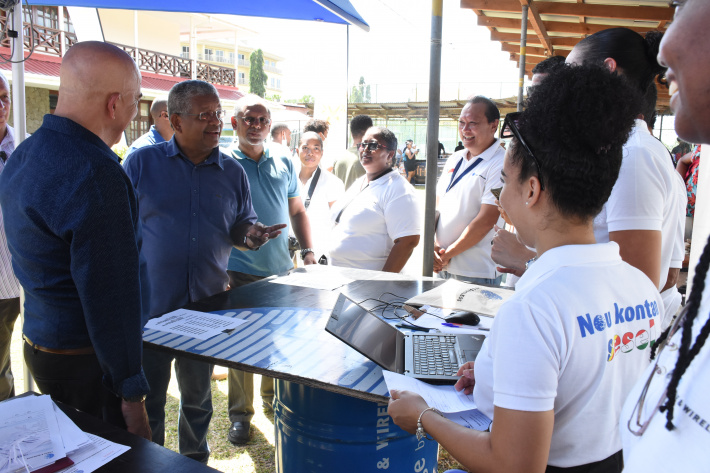 President Ramkalawan and VP Afif taking a tour around the stalls

Télésesél, a private owned commercial TV station, celebrated its five years of existence on Saturday with a roadshow on the grounds of Camion Hall in Victoria.

The roadshow was graced by the presence of President Wavel Ramkalawan and Vice-President Ahmed Afif.

The highlight of the event was a cake cutting by President Wavel Ramkalawan accompanied by Vice-President Afif, line producer for Télésesél Clive Camille, content creator Gilmer Philoe and the chief executive of Cable & Wireless George D’Offay.

Télésesél, owned by Cable & Wireless, is one of the two private owned TV stations in Seychelles. It was launched in 2017 through a partnership with Radius Studios and started its first broadcast on May 11, 2017.

Télésesél broadcasts exclusively on Cable and Wireless TV 24/7 with a mix of content.

The roadshow attracted various members of the public and in a live interview President Ramkalawan stated that within the five years Télésesél has grown quite rapidly.

Vice-President Afif noted that the media has evolved in the last 10 to 15 years, highlighting that back then broadcasting was very controlled and limited. However in the recent years it has been ‘liberated’ especially in 2017 after the SBC amendment Act and the coming in existence of Télésesél.

The President stated “the freedom of the media is something that I always fought for”, adding that after the amendment it became much easier in terms of licence fees to establish a station, either radio or TV.

The line producer for Télésesél, Clive Camille, stated that for the roadshow they welcomed many of their partners and various people involved at Télésesél.

“We are organising this activity to bring everyone together and celebrate… this is a way to thank them and to thank the people that follow us,” he said.

Télésesél was also broadcasting live for the event so that their viewers from the other islands could participate in the roadshow as well.

Télésesél started out with only two persons and today the media house has 23 personnel who are involved in producing, filming, directing the many programmes on its channel. The channel also delivers local news and sports daily and Mr Camille stated that “we have placed much effort in elevating the content we are creating. We are giving a lot more visibility and complementing the work of SBC (Seychelles Broadcasting Corporation)”.

For the future, Mr Camille hopes that their audience becomes more active with the channel; participate more especially in their programmes as they have a lot of space to accommodate.

The line producer has launched an appeal to the public to continue encouraging them so that they can continue to grow and bring more diversity to the contents shown on the channel.

He also told the youths that being in the media industry is quite difficult as you have to be on call daily. However if they are passionate about the media they should follow their dreams and approach him for any advice.

A part of the roadshow, Cable and Wireless was also stationed at the Camion Hall offering its services and supporting its partner Télésesél. Also supporting the channel was various local artists and dancers performing with the crew of Télésesél conducting games to win Télésesél merchandise such as bags, pens, bottles and more.

The accompanying photos show some highlights of the event on Saturday. 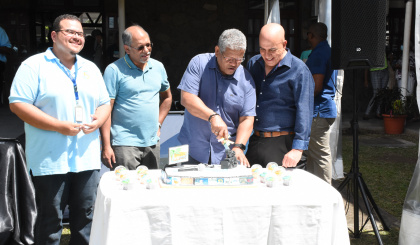 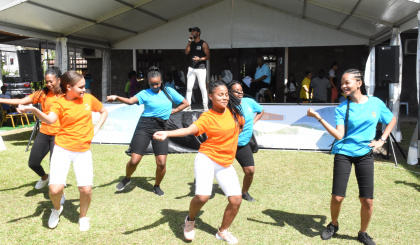 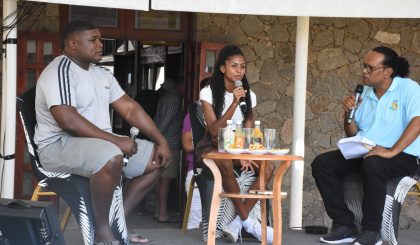 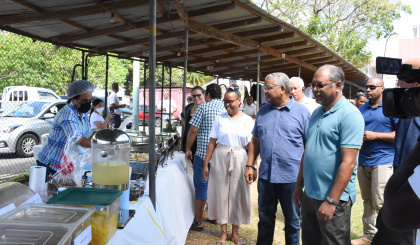 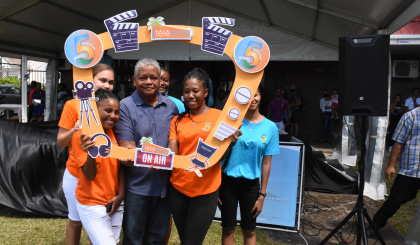