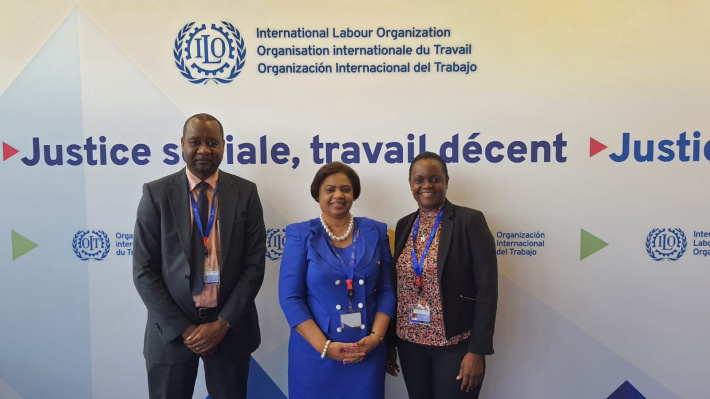 Cognizant of challenges being faced by the world of work today as a result of Covid-19 pandemic and the unrest in eastern Europe, the conference has decided on an Agenda that have particular institutional importance for the current climate,including discussions on the inclusion of safe and healthy working conditions in ILO’s framework, decent work and the social and solidarity economy as well as setting standards on quality apprenticeships.

For the safe and healthy working conditions, discussions started in 2019 noting its importance and recognising it as a fundamental principle and right at work within the meaning of the ILO 1998 Declaration.

Whereas for decent work and the social and solidarity economy, it is the first comprehensive discussion that have ensued, given its role in generating decent work, productive employment and improved living standards for all.

The expected outcomes of the general discussion are to provide a universal definition, provide policy guidelines for member states wishing to adopt, among others.

Where the setting of standards on quality apprenticeships is concerned, there are two principal reasons; firstly given its important role in addressing skills mismatch, improving employability and productivity. Secondly, it is to ensure appropriate decent working conditions and protection for apprentices and trainees at the workplace.

For this year, the director general of the ILO, Guy Ryder, addressed the theme of least developed countries in his report to the Conference, where he spoke about ‘crisis, structural transformation and the future of work. The report places before the ILO’s global tripartite constituency, i.e. government, workers and employers, pressing policy themes so that plenary discussions by member states can happen for guidance to the ILO for future strategical intervention.

In this regard, in her address to the conference yesterday, Minister Francourt spoke about Seychelles use of migrant workers that come mostly from least developed countries (LDCs) to fill labour and skills shortages.

She informed of bilateral labour agreements that have been signed and earmarked to be signed with those countries for effective labour migration management.

She cautioned of the level of informality at this instance becoming more and more of a challenge requiring the ILO to exert greater effort to identify inclusive and sustainable solutions.

She continued by saying that like LDCs, small island states have unique characteristics which heighten its economic vulnerability.

She spoke about the need for diversification instead of relying mainly on tourism for job creation, a strategy that will build the country’s resilience. However, it must be mindful that the workforce will need to be skilled for the jobs to be created.

She informed with pride of Seychelles’ recovery post-Covid-19 which she said is fairly positive and steady so far.

In conclusion she made a plea for the tripartite constituents to show ownership and commitment to address priority actions for a human-centred world of work.

The conference is also hosting heads of state for the World of Work Summit to be held on Friday June 10, 2022 under the theme ‘Tackling Multiple Global Crises: promoting human-centred recovery and resilience. President Wavel Ramkalawan is due to address the Summit virtually on the day.

On the sideline of the conference, Minister Francourt met with the ILO regional director for Africa, Cynthia Samuel-Olonjuwon whose office oversees ILO activities in Africa including Seychelles, to discuss future cooperation of mutual interest and also to report on current projects being undertaken with ILO’s collaboration.

The minister expressed her appreciation of the ILO’s support to the Seychelles which has assisted in achieving various objectives, notably the financial support that came at the crucial time in the aftermath of the Covid-19 pandemic that have assisted a number of jobseekers to be re-skilled in order to secure a job that is on demand. Also discussed was the Inclusion Agenda that the regional director said is important and that she felt encouraged to learn is very much on track to allow the participation of all citizens in our society, no matter their economic or physical and mental conditions, particularly people living with disabilities, the young mothers and persons recovering from substance abuse.

She pledged the full support of the ILO and encouraged Seychelles to continue to move the cause of island states particularly our advocacy role with the blue economy.

The minister also held discussions with her counterparts from other states participating in the conference, sharing experiences and thoughts on the recent medical and diplomatic crisis that continue to adversely affect the world of work and the economy.

Being an island state with tourism as its main income similar to Seychelles, the minister learned that Sao Tome and Principe is experiencing similar challenges as us, particularly the decline in tourism whereby it has had to look at diversifying its economy in other areas such as agriculture.

Whereas for Cabo Verde the pandemic has affected it gravely causing a serious rise in its unemployment rate whereby it has had to re-skill jobseekers.

Minister Francourt was among eight ministers chosen to participate in a campaign promoting key messages relating to social justice being run by the ILO on different social media platforms such as Facebook, Twitter.

The other members of the Seychelles delegation attending the ILO Conference are Jules Baker principal secretary in the Employment department; Veronique Bresson, executive director and representatives of the workers’ union, Antoine Robinson and Seychelles Employers, Donald Monnaie.

The accompanying photos show some highlights of Minister Francourt’s participation at the Geneva meeting.

Press release from the Ministry of Employment & Social Affairs 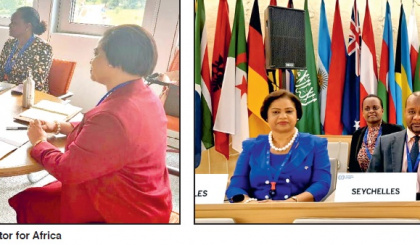 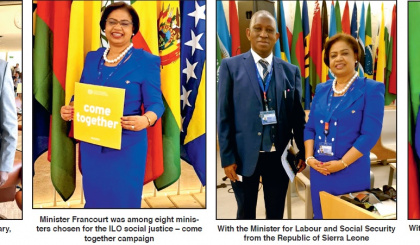