Mack around the world ‒ The Macksolo project |31 May 2022 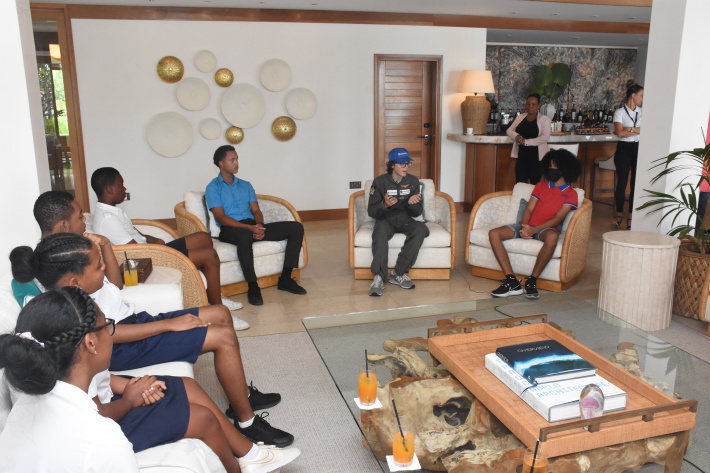 Mack during his interaction with the students (Photo: Thomas Meriton)

Mack Rutherford, the 16-year-old pilot of Belgian and British nationality and who is attempting to break the current world record to become the youngest person to fly solo around the world, yesterday morning met with a group of aspiring young people who have achieved exceptional results in academic, environment and sustainability, social and at community level.

Held at L’Escale Resort Marina & Spa, Roche Caïman, the interactive session between Mack and the 11 aspiring secondary and post-secondary students was organised by Zil Air in partnership with the National Youth Council (SNYC). It was an opportunity for the students to learn about the youngster and his aviation exploits.

During their interaction, Mack shared with them information about his family, his education and also on how he got his micro light pilot’s license at the age of 15 years old, making him the youngest pilot in the world. He also shared his experience as a young pilot, the journey he is undertaking across the world and the challenges he has encountered in flight and during landing at the different airports, among other points he shared.

Speaking to the press after the discussion, Mack stated that it was nice talking to the students and also to know that there are lots of other children who are interested in aviation and they don’t need to wait until they are 18 years old to follow their dreams.

“I am trying to show that young people can make a difference. You don’t have to be 18 to do something special. You could be 17, 16, 15, 14 or even younger. It doesn’t matter about your age, just follow your dream and it will come true,” Mack said.

Most of the students who gave their views said it was very impressive to learn that someone as young as them could achieve such height, adding that the discussion was very informative and it has motivated them to aim high and pursue their career dreams.

“What he is doing is for me something impossible for someone at this age and to see him doing it has motivated and encouraged me to follow my dream just like he did,” said 18-year-old Garett Belmont, a first year engineering student at the Seychelles Institute for Technology (SIT) and who has a passion for aviation.

“It was nice talking to someone your age who has recorded such great achievements. With him here it will surely motivate other youths to develop their passion and do what they dream to achieve. Personally, getting to know him has encouraged me to put more energy to achieve my goal.  I wish that other young people do get the chance to take part in such interactions when they arise in the future,” said Ashelle Bastienne, a 16-year-old S5 student from English River secondary school whose dream is to become a marine biologist and environmental law officer.

The executive director of Zil Air, Francis Savy, thanked Mack for sharing his experience and passion for aviation to the youngsters, a connection which will further motivate even more young people to go and make a difference in their communities and lives.

Mack left Sofia, Bulgaria on March 23, flying a Shark, a high-performance ultra-light aircraft manufactured in Europe, with its cruising speed reaching 300 kilometres per hour. His mission is to cover 30 countries over five continents. He arrived in the country on Saturday, and this is his ninth destination after having travelled from Bulgaria across the Mediterranean and through the Sahara to the Congolese jungle, before turning east through Mozambique, Madagascar and the far eastern Mauritius island of Rodrigues.

He is expected to leave the country this morning in his micro light aircraft to continue his quest to break the current world record so that he becomes the youngest person, in the Guinness Book of Records, to fly solo around the world.

From the Seychelles International Airport, he will head to the Yemeni island of Socotra, before heading to Oman, the United Arab Emirates, India, China, South Korea and Japan.

Once at the Berring Strait, he will enter Alaska and then down the west coast of the United States, to Baja California and a small island in the Pacific, Isla Socorro. His last legs will take him through mainland Mexico and Texas, to New York and then Canada, Greenland and Iceland. He will then cross the Atlantic to Scotland and continue through England to Belgium and return to Sofia, Bulgaria where his journey will end.

Mack, who spends most of his time in Belgium, said after his journey, he will continue to fly and will go back to schooling to catch up with his studies. After that he will join aviation, most probably the Belgian air force.

He was inspired for the solo trip around the world by his older sister Zara, who is also a private pilot and completed her own circumnavigation of the globe to become the youngest woman in history to do so and the youngest person to circumnavigate the world in a microlight on January 22, 2022.

Also present at L’Escale Resort Marina & Spa to witness the interaction between Mack and the students were SNYC chief executive Penny Belmont and staff of both SNYC and ZIl Air. 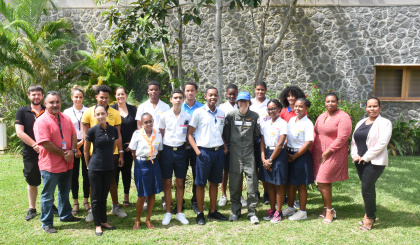 Mack in a souvenir photograph with the students and guests (Photo: Thomas Meriton)