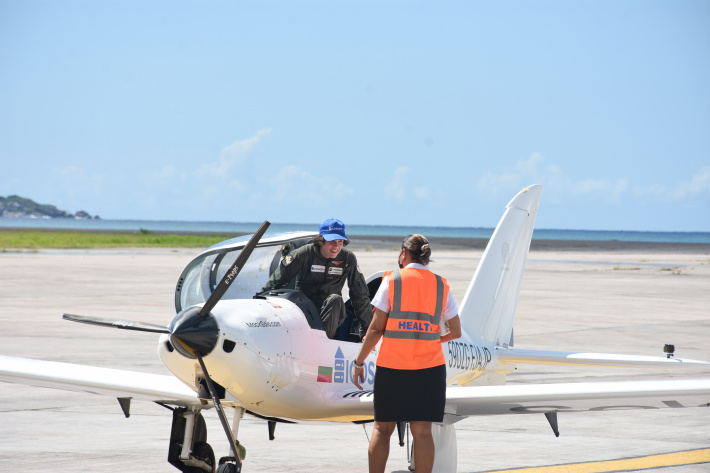 Mack gets off his Shark after landing at the Seychelles International Airport on Saturday (Photo: Thomas Meriton)

‘Age should not hold you back from achieving your dreams,’ says sixteen-year-old pilot

Young people can make a difference in life, while age should not hold you back from achieving your dreams, sixteen-year-old pilot Mack Rutherford, who is flying solo around the world, has said.

Through his ‘Macksolo’ project, the young pilot is attempting to break the current world record of being the youngest person to fly solo around the world.

Flying a Shark which is a high-performance ultra-light aircraft manufactured in Europe, with its cruising speed reaching 300 km/h, Mack left Sofia, Bulgaria on March 23, and his mission is to cover 52 countries over five continents.

From Bulgaria, Mack flew south across the Mediterranean and through the Sahara to the Congolese jungle, before turning east through Mozambique and Madagascar, the far eastern Mauritius island of Rodrigues, before landing at the Seychelles International Airport on Saturday, following a seven-hour journey.

He said despite being a very long journey – Mauritius to Seychelles – he was happy with the trip as he managed to see many small islands.

From Seychelles, Mack will head to the Yemeni island of Socotra, before heading to Oman, the United Arab Emirates, India, China, South Korea and Japan.

Once at the Bering Strait, he will enter Alaska and then down the west coast of the United States, to Baja California and a small island in the Pacific, Isla Socorro.

His last legs will take him through mainland Mexico and Texas, to New York and Canada, before Greenland and Iceland to cross the Atlantic to Scotland and continuing through England to Belgium and returning to Sofia where his journey will end.

He said after completing the journey, he will be taking a break from flying since he needs to catch with his academic side of life, while his future career will definitely be aviation-oriented.

Being an Air Force tops the list of his career options.

Mack is of a multi-nationality background, with Belgian and British parents, and has spent his entire childhood in Belgium.

When he was only fifteen and three months, he received his microlight pilot’s license making him the youngest pilot in the world, and has then flown two Trans-Atlantic crossings.

It is safe to say that Mack was born in a family of aviators, with his father Sam a professional ferry pilot, and his mother Beatrice a recreational private pilot.

His sister Zara, who is also a private pilot, completed her own circumnavigation of the globe, becoming the youngest woman in history who has done so and the youngest person who circumnavigated the world in a microlight on January 22, 2022.

His great great-grandmother on his father’s side and grandparents on his mother’s side were private pilots too.

While in Seychelles, Mack will meet and interact with young people who have achieved exceptional results be it in academic, environment and sustainability or social/community activities from secondary and post-secondary institutions.

The event, hosted by Zil Air in partnership with National Youth Council (SNYC), will take place today at L’Escale Resort and Spa.

This event, in partnership with the SNYC, is an opportunity for Mack to meet and interact with young people of Seychelles who have achieved exceptional results be it in academic, environment & sustainability or social/community activities. The participants come from secondary and post-secondary institutions in Seychelles. 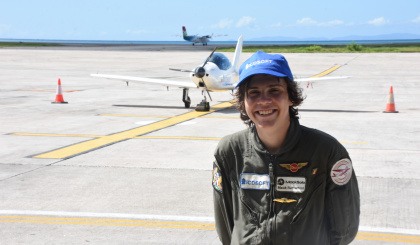 A delighted Mack poses for our photographer after his seven-hour flight from Mauritius to Seychelles (Photo: Thomas Meriton)