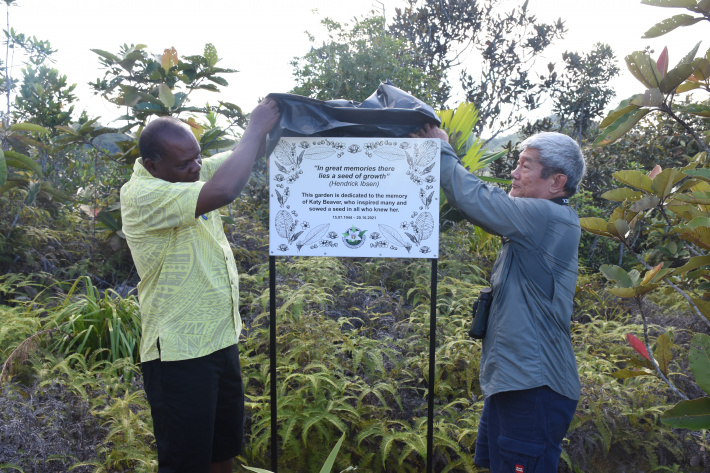 One of the elders of the Seychelles botanical world, Katy Beaver, has been honoured for her great contributions in promoting and protecting the country’s green environment through a plaque erected at the Tea Tavern Restoration Site at Sans Soucis.

Mrs Beaver, who passed away in October last year following an illness, was a founder of the Plant Conservation Action (PCA) group, and as a conservationist, she was involved in many types of researches and studies, while also being a writer and illustrator.

In 2017, she was honoured by the Seychelles Natural History Museum when a fern was named after her.

Fouzer Kati – Katy's fern in English – was in honour of her extensive contribution toward the study of plants in Seychelles, popularising scientific research and developing educational material for children and young researchers.

Mrs Beaver also worked on other projects and they include the upgrade of the National Herbarium, the monitoring of the Bryophytes on dying Sandragon trees and the setting up of a permanent exhibition in the Doctor's House, Curieuse Island – a terrestrial and marine park.

Mrs Beaver’s most remembered quote is “Restoration is a marathon and not a sprint”.

The plaque was officially unveiled during a simple but emotional ceremony yesterday by Mrs Beaver’s husband Lyndsay Chong Seng, a well-known local environmentalist, and former Minister for Environment Didier Dogley, who was a founding member of the PCA.

Through his testimony, Mr Chong-Seng retraced his wife’s journey into her restoration project, noting that following financial constraints due to the country’s economical situation – macro-economic reform – back then, preventing partners to continue assisting the PCA in maintaining the project, Mrs Beaver mobilised the community through volunteerism to join the cause.

He said Mrs Beaver’s secret weapon in mobilising people was a special kind of biscuits she baked and shared with everyone after voluntary work.

Mr Chong-Seng said that everyone looked forward to savour the biscuits which he said have been the backbone of the project which is still progressing to date.

He added that Mrs Beaver also realised that the elders of the project were reaching a certain age that required relief, therefore, she encouraged and mobilised a lot of young people, especially students who joined the PCA and are still active today.

Mariette Dine, one of Mrs Beaver’s recruits, said while doing her A-Level studies she was still uncertain on her career path, until she followed one of her friends to one of Mrs Beaver’s education awareness stalls where she was giving information on the PCA, including its roles and functions.

Following the introduction, she just went with the flow, attending several meetings and hikes of the group, without really understanding the concept behind, but eventually learned along the way.

She said she grew a passion for the environment and conservation through Mrs Beaver, who also introduced her and others to many pioneers in the field, thus encouraging, and enabling to build an environmental career.

The PCA is a Seychelles environmental non-governmental organisation (NGO), created in 2002, by plant scientists, including Mrs Beaver, dedicated to the conservation of plants in the country, in particular the native flora.

It is run entirely by volunteers, while its main objective is to promote native plant conservation in Seychelles by supporting scientific research and conducting community awareness activities.

Its aim is to promote research into the plants of Seychelles while also ensuring that we link this with education and awareness-raising.

It has produced several publications about the plants of Seychelles, along with an annual newsletter, “Kapisen”, named after one of Seychelles’ magnificent endemic trees. 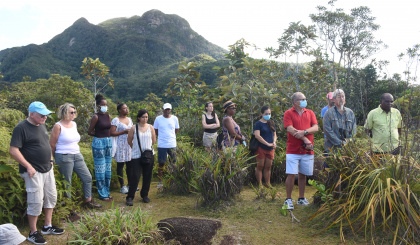