Seychelles gets ready for upcoming national events |28 May 2022 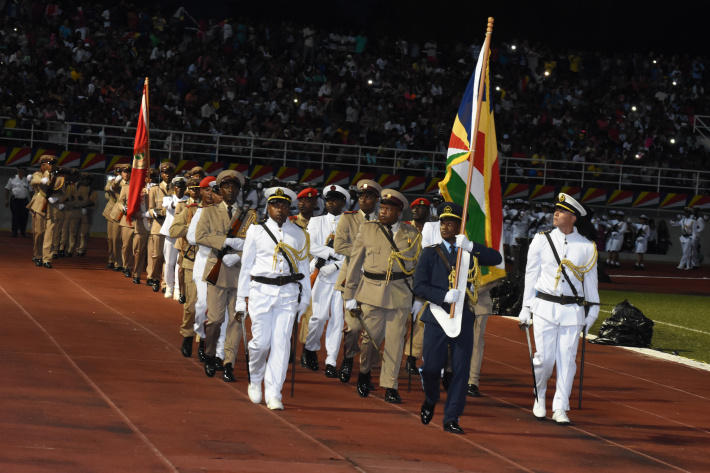 The National Day parade will this year take place in the heart of Victoria, away from its usual Stad Linite venue

After a two-year pause due to the Covid-19 pandemic during which the country was under strict public health measures preventing public gathering including the organisation of activities to mark our National/Independence Day, this year the government has decided that a certain number of activities will be organised to commemorate these two important events.

A National Day organising committee headed by Designated Minister Jean-François Ferrari, who is assisted by the Mayor of Victoria, David Andre, met with members of the local press yesterday morning to give more details about the activities being organised.

Minister Ferrari said the decision to organise the activities has been taken following a lot of consultations with the Public Health Authority.

“It is expected to be a moment of great pride and joy because after two years under Covid-19 health restriction measures, the government feels that it is time that our people start to breathe more normally and enjoy things that are dear to us,” Minister Ferrari said.

“The celebrations will be different but the activities will be interesting with some new additions and also changes,” Minister Ferrari explained.

On June 18, which is Constitution Day where we honour our Constitution, the main activity will be the flag-raising ceremony at the Moniman Lavwa Lanasyon in Victoria at 8.30am. The same ceremony will be replicated on La Digue at 11.30am and at 4pm at Baie Ste Anne on Praslin. Youths and different other groups in the districts and society will be engaged in the activities around the flag-raising ceremony on all three islands.

“The activities will focus around our fundamental rights and liberties in our Constitution from which excerpts will be read. There will also be poem recitals, song interpretations ‒ all around our Constitution and our rights,” Mayor Andre explained.

To mark our National/Independence Day on June 29, Minister Ferrari said some major changes are being introduced. For instance activities will be concentrated in the heart of Victoria.

“For Independence Day there will be a military parade which will start from Stad Popiler and make its way up to and around the clock tower going down Independence Avenue up to the Bicentenary Monument, turning right down 5th June Avenue (soon to be Constitution Avenue) and back to Stad Popiler via the rear gate,” Mayor Andre explained.

He said the parade will be on the streets and members of the public will be able to stand on both sides of the streets to watch the display.

Other than the platoons depicting the different military as well as police wings and fire brigade, the parade will also showcase the different assets including transport and equipment used by the different brigades in delivering their duties, Mayor Andre noted. There will also be some musical and cultural displays by different groups.

“We are hoping that this way of doing things could in the future be improved and be done on a larger scale as we have to be mindful that we are now still under some level of health restrictions,” Mayor Andre remarked.

Meanwhile, like it has been customary, we are expecting the participation of foreign and friendly forces and already India has confirmed its participation while Mauritius and France have also been invited but are yet to confirm their participation.

All the different activities will be broadcast live on Radyo Sesel and SBC TV.

Following the parade, restaurants around town will be open to sell snacks, food and drinks.

Mayor Andre stressed that no food stalls are being allowed as per public health guidelines to prevent large gathering of people.

Also being discouraged is the sale of alcohol to prevent disorderly conduct.

On the following weekend of July 2, an open bazaar is being organised in collaboration with Enterprise Seychelles Agency (Esa) on Independence Avenue. Any artisan wishing to take part can get in touch with Esa for more details.

“The aim of concentrating all the activities in the heart of Victoria is to be closer to the people and also because refurbishment works are expected to be carried out on Stad Linite and furthermore we want to avoid going into making unnecessary expenses to host activities there,” said Mayor Andre.

Meanwhile, Designated Minister Ferrari is reminding the public that all activities being organised to celebrate our national days during the month of June are being done under the strict guidelines of the Public Health Authority.

“We are hoping that we will have a continued good respite from Covid-19 infections because we have been warned by the Public Health Authority that if cases of infections rise in the coming weeks the activities will have to be cancelled. This is also why we are hosting the activities in the town area because if there is to be a cancellation, there would be no prior expenses and costs,” Minister Ferrari noted.

He is calling on the public to as much as possible stay at home and watch the activities live on TV with their families as they will see everything better on television but for those who want to come to town they have to ensure they keep their distance and observe all health measures.

For the celebrations, Designated Minister Ferrari said the committee will focus a lot of its efforts on dressing up Victoria in her most colourful party attire.

“We have just received a batch of 30,000 decorative flags which we will put up around Victoria and distribute to businesses to put up on their buildings. We are also calling on businesses in the town area to make an effort to spruce up their buildings and feel the pride in decorating their places for the celebrations,” Minister Ferrari pointed out, noting that they want the celebrations to be joyful and memorable.

Meanwhile, the police will be out in force to guide drivers and motorists during the different celebrations and members of the public are being encouraged as much as possible not to come in the town area in their vehicles but to find parking space on the outskirts of the town area. 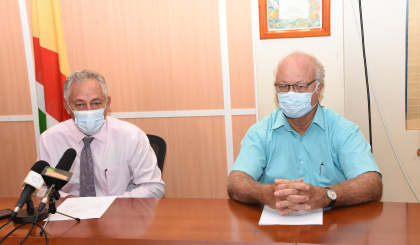