Minister Joubert meets with FAO representative for Seychelles |19 May 2022 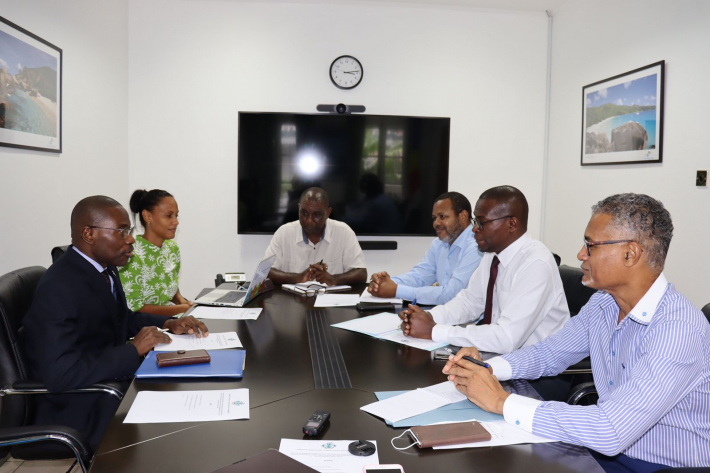 The meeting between Minister Joubert and the FAO representative

The Food and Agriculture Organisation (FAO) is a specialised agency of the United Nations that leads international efforts to defeat hunger. Its main goal is to achieve food security for all and make sure that people have regular access to enough nutritious and safe food to lead active, healthy lives. With 195 members ‒ 194 countries and the European Union, FAO works in over 130 countries worldwide.

FAO has been providing Seychelles with technical support for the past decades since 1993. During a meeting on Tuesday afternoon, Dr Boliko mentioned that Seychelles’ food standards are very high when it comes to food safety. He also discussed matters that are included in the FAO agreement such as projects status, office premises, recruitment of key role representatives and the involvement of member countries.

Minister Joubert declared that the FAO is one of the catalysts in developing the agricultural sector in Seychelles.

Dr Boliko and Minister Joubert had a long discussion on the new programme coordination unit which will soon be introduced as the programme development coordination section (PDCS) which will focus mainly on the implementation of projects not only for agriculture but for the ministry as a whole. They detailed the role of the national project coordinator who will oversee the PDCS within the ministry.

Further in his discussion, Dr Boliko professed on what the FAO is expecting not only from Seychelles but also other member countries and these are efficiency; knowledge development which will benefit not only the ministry but the government of Seychelles and also the efforts to manage projects funded by the FAO.

Dr Boliko also mentioned the possibilities of facilitating trade within member countries of the FAO which will benefit both parties.

Lastly on his part Dr Boliko discussed on the FAO mission towards the climate smart agriculture, in which he declared that the FAO will communicate and invite Eduardo Mansur, the director in the Office of Climate Change, Biodiversity and Environment and his team to Seychelles with the aim to identify solutions and techniques to develop a sustainable agricultural framework. This will help produce food in controlled environment which has helped many countries who are battling climate change.

In the end, Dr Boliko also presented his document of accreditation which declared him as the FAO representative in the Republic of Seychelles, and a copy of the same document was presented to the Minister for Foreign Affairs and Tourism earlier that day.

Present at the meeting was the principal secretary for agriculture Keven Nancy, Roland Alcindor, Guy Morel, the assistance convenor for the United Nations Food System, and Audrey Zelia, the assistant project coordinator for FAO.

Press release from the Ministry of Agriculture, Climate Change and Environment 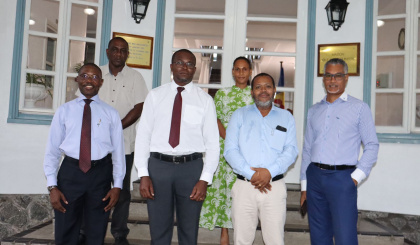 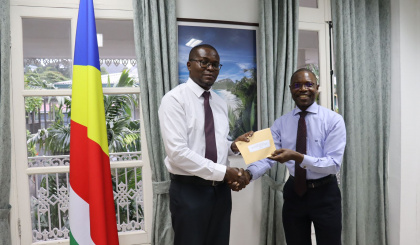