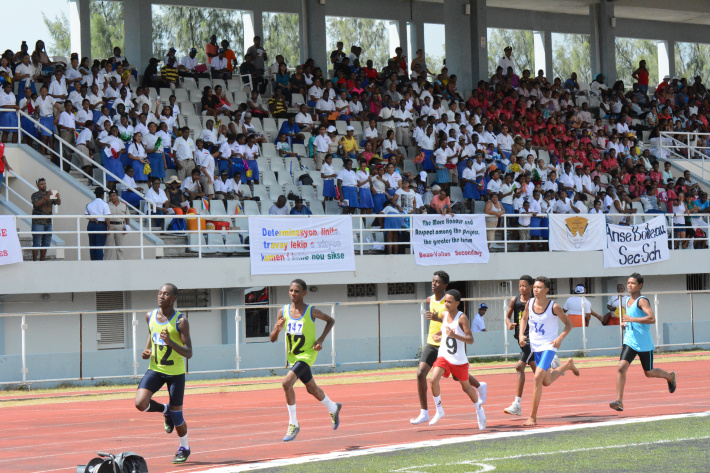 Competitors during one of the races in 2018 (Photo: Patrick Joubert)

Primary school competitors from Mahe were the last group to take part in heats ahead of the44th National Inter-School Athletics Championships scheduled for Saturday June 18.

The annual championship had not featured over the past two years ‒ 2020 and 2021 ‒ following a long break due to the threat of the Covid-19 pandemic that forced the department of health to order the closure of all educational establishments as a prevention measure to avoid the spread of the disease.

After the island of La Digue hosted the heats for primary and secondary schools from Praslin and La Digue last Friday, it was the turn of competitors from schools on Mahe to pit their skills against each other as they fought for places in the finals on Saturday June 18.

Competitors from secondary and post-secondary institutions were expected in action on Tuesday at Stad Linite but because of bad weather the events have been postponed to today, while those from primary schools competed yesterday at the same venue.

This National Inter-School Athletics Championships bring together over 1,100 athletes from all public and private schools from Mahé, Praslin and La Digue.

In the 43rd championships in 2019, only seven championship records were shattered in 100 track and field events and the count was two less than the previous year’s total (2018), which was nine.

The record breakers were:

La Digue primary and Anse Royale secondary retained their silverwares as best schools, while the Seychelles Tourism Academy was the new professional centre champion, dethroning the Seychelles Institute of Technology.

In the professional centres category, the Seychelles Tourism Academy (STA) accumulated 132 points after clinching the girls’ open cup which was enough to put them on top to dethrone 2018 winner the Seychelles Institute of Technology (SIT).

Hall of Fame of the 43rd championships