IMO International Day of Women in Maritime |18 May 2022 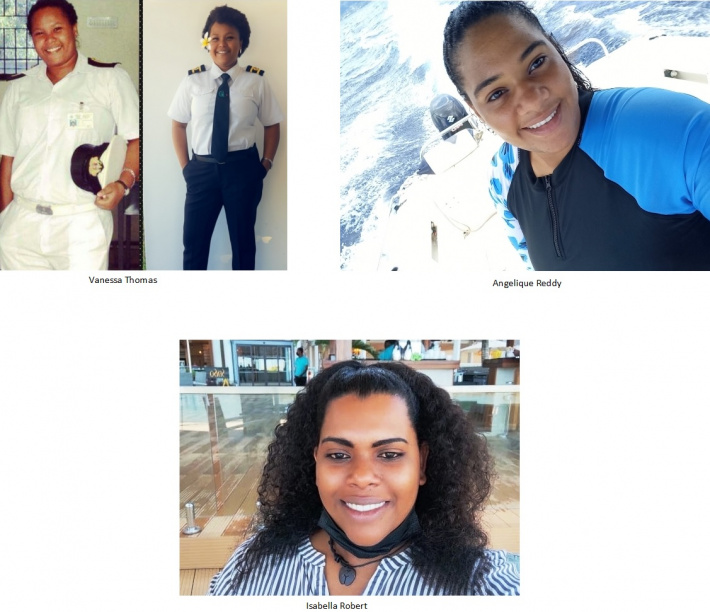 Today, May 18, is the first time countries across the world – including Seychelles – is observing and celebrating the IMO International Day of Women in Maritime. It was the International Maritime Organisation (IMO) Assembly that decided to establish an International Day for Women in Maritime, to be observed on May 18 every year, as from 2022. The International Day of Women in Maritime falls in line with the IMO’s gender programme and seeks to help women achieve representation in what is traditionally a male dominated industry. Locally, the Seychelles’ Women in Maritime Sector in East and Southern Africa (Womesa) association takes the opportunity today to celebrate Seychellois women who – directly and indirectly - are involved in the maritime industry, and who hold an incomparable passion for the sea and the opportunities it brings. Meet three of these Seychellois women currently making waves in the maritime sector, all three with the vision and ambition to help the sector grow.

Thirty-three-year-old Vanessa Thomas is the first female Seychellois appointed as Second Officer by the Seychelles Petroleum Company Limited (Seypec) and is working her way up to qualify to sail as a Chief Mate, and then proceed to the final phase which is the Masters/Captain Unlimited level. A master mariner is a licensed mariner who holds the highest grade of seafarer qualification, meaning that Vanessa would have no limits on which vessels she will be able to work on. Chemical tankers, LNG carriers, cruise ships – the options are, for lack of a better word, limitless for Vanessa.

Now, steps away from becoming a master mariner, Vanessa hopes to empower women to follow their dreams – be it in maritime or other industries.

“With determination and perseverance everything is possible, always be persistent in delivering despite difficulties. I have had my fair share of difficulties; my journey was not as smooth as a lake. There were ups and downs. When I joined as cadet there were only two women working on tankers, Mary-Jeanne Pathon, and myself. I was already determined to further my career in the Merchant Navy, I have had managers/seniors discouraging me to pursue my dream because ‘Seychellois women never make it far in this industry especially on our tankers’ and as a young woman I was so disappointed about the comments and discrimination.”

Nonetheless, growing up with a love for the ocean, she never had a doubt that she would one day join the maritime industry and succeed in it.

“What attracts me about the sea most are the beautiful and jaw dropping scenery, the different panoramic views of the horizon during sunrise, sunset, full moon, landfall, dense traffic (heavy traffic from other vessels’ displayed lights) you name it. Being at sea, I am able to appreciate the peace and tranquillity of the marine environment,” Vanessa expresses.

On the occasion of the International Day for Women in Maritime, she has this to say: “To all women, especially young ladies, do not hesitate to choose the maritime industry. Broaden your horizon, it is an enriching industry with prospects worldwide. Challenging yes but also fulfilling. But above all never forget to do it with love and compassion.”

In her former role as a school counsellor, Angelique’s first career had absolutely nothing to do with the maritime industry. This was until she joined the Seychelles Maritime Academy (SMA) as a Registrar.

Her love for the ocean had never been in doubt. Growing up on the coast of Grand Anse Praslin – swimming and fishing almost every weekend – she had no other choice but to fall in love with the sea.

She explained that her job change from school counsellor to Registrar was a leap of faith as she met the minimum requirements when she had seen the vacancy advertised in the Seychelles NATION at a time when she was looking for a career change.

“As a fully fledged Registrar now, I am responsible for all the data and statistics at the academy, marketing, induction and enrollment, assist in the co-ordination of and representation at internal events such as Open Days and fairs, orientation events, conferences and exhibitions such as Applicant/Visit Days and VIP visits, graduations and public lectures; and external events such as major student recruitment events, school expos, career fairs to ensure the Centre is represented in the wider community (Industry) and to ensure prospective parents are provided with accurate and appropriate advice. Network with careers officers, schools and external organisations/agents and relevant individuals for the purposes of maximising the effectiveness of the communications, marketing and promotional activity undertaken by the institution.

I also act as the learner support officer. I coordinate the activities relating to the students, and I am the academy’s liaison person for any outside partners,” Angelique details her work.

“I was happy when I was successful in my job application with the Seychelles Maritime Academy. Even though I am a Registrar, I also go out at sea to fish, catch mackerels, and take pictures and videos of what the school and its students are doing as part of its marketing strategy. I see these as opportunities for my own professional development and to learn more about the sea.”

In her new role, Angelique quickly realised the vast opportunities the maritime sector holds for people – no matter their gender.

As the marketing officer for Womesa Seychelles, Angelique is passionate about promoting and engaging women in the maritime industry.

“I am recruiting past learners from SMA to the association because some of them have lost track; not everyone who completes their studies at the maritime academy goes and work in maritime. It is a bit upsetting for some that after all their efforts and sacrifices, they find themselves in a domain that is not related to maritime. I want to reach out to these past students and give them the motivation to move forward in this sector, because we really do need our Seychellois working in the maritime industry. As someone who works with these students, I can tell you that they have a lot of potential; they are clever and ready to learn,” she added.

A sign of hope and progress, Angelique has observed an increase in the number of girls attending the SMA over the couple of years and the gender gap at the academy is gradually dwindling.

“This year we have a girl in marine mechanic but when I joined SMA some two years ago, it was only boys. There is also more interest from girls in nautical science, as they are more interested in navigating at sea. Additionally, we are observing more of a gender balance in the apprenticeship programme.”

On the occasion of the International Day for Women in Maritime, Angelique says: “My hope is that Womesa gets more support from those in the maritime industry. We are calling on businesses and even the government to support us in our endeavour to help Womesa become an association that is well recognised.”

An officer of the Seychelles Police Force’s marine police unit, Corporal Isabella Robert is an eager proponent of women working in the maritime sector. She has been with the marine police for seven years and is currently working as the unit’s operation and training officer.

The 29-year-old faced doubts and criticisms when joining the sector, from her father who disapproved of her joining the maritime world to other colleagues who unabashedly told her that the sea was not a place for women.

But Isabella, a mother of two, has proven and continues to prove that women can hold space in that sector.

Isabella joined the marine police a year after it was created – try as she might she could not keep away from the sea.

“The marine police monitors the coasts and the beaches as well, since the tourism police is no longer functioning. We are doing some heavy policing on the sea in order to curb illegal maritime activities such as turtle poaching. We work in close partnerships with the marine park authority, SMSA, SFA and so on. There are also some procedures being undertaken to give Coast Guard the power of arrests, so our marine police officers are assisting the Coast Guard with patrolling to show them how this is done.”

When asked what attracts her to the sea, Isabella responds: “I knew this is where I belonged. I personally take being on the sea as an adventure.”

“The sea might be a dangerous place but I keep going back to it. There’s always a possibility that you might not come back home; it could be a mechanical failure on your boat which keeps you adrift, if the sea is rough you can go overboard, when diving you can get narcosis and bends which can leave you paralysed.”

Isabella has faced some scary moments on the high seas. On one occasion, during her brief experience with the Coast Guard, she found herself thrown overboard in an attempt to recover a boat. Thankfully, two of her colleagues at the Coast Guard were able to save her.

Another time – with the marine police this time – Isabella jumped in the water to save a man that was about to drown and almost went under as well, but she was successful in saving him. “These incidents are scary but after a while I get used to the sea again. It’s the nature of the job.”

“My message for women is that working at sea does not mean that you do not take care of yourself. It is not like that. Yes, you will be like a fisherman and smell like the sea as some people say but when you reach land you have all the opportunities to take care of yourself. After all you are still a woman – you can still get your pedicure and manicure done. Take it as an adventure – it is exciting, it’s like you are in another world when you are at sea.”