Beau Vallon players walking off the court after their win (Photo: NSC)

City Ladies and Beau Vallon are the winners of the women’s and men’s Curtain-raiser tournament for the year 2022.

The tournament was played over three days ‒ Friday, Saturday and Sunday ‒ and all matches were contested on a best-of-three series.

The men’s final was disputed by Beau Vallon and Neo Boys and it proved to be a very close encounter but in the end Beau Vallon were victorious on a tight 2-0 (30-28, 25-23) score.

The Curtain-raiser was the first competition organised by the Seychelles Volleyball Federation (SVF) since the first half of 2020 when all sports activities were grounded as a result of the Covid-19 pandemic.

Sports NATION has learned that the next competition on the calendar is the Land Marine Cup followed by the SVF Cup.

The league is expected to start in either September or October and end next year, bringing the SVF in line with other leagues on the continent and in Europe, thus easing the issue of international transfer in the future. 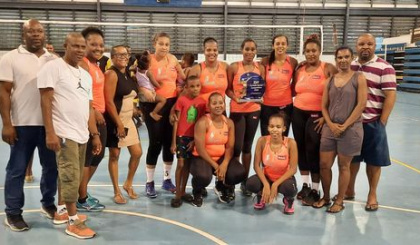