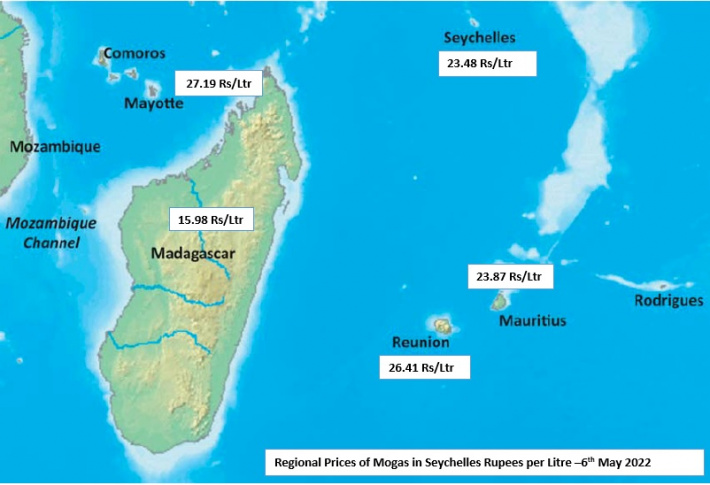 Oil prices remains on the climbing curve these days and are expected to remain at high levels in the coming months as the world tries to adjust itself with the current supply losses from Russia.

A barrel of crude oil on the international market kept hovering over the USD110 mark in the first week of May, as fear of a tighter worldwide supply is fast emerging.

With Russia’s exports plummeting by one million barrels per day and are liable to attain 2 million this month, there is no secret why the oil markets are soaring.

“Early January this year, a barrel of brent crude traded at USD78 but skyrocketed at above USD100 when the war in Ukraine broke out and peaked to USD130 in first week of March,” Sarah Romain, Seypec’s acting chief executive and general manager, commercial told Seychelles NATION.

“Although it dropped from mid to end of March, it has now started another rally and had settled at around USD110 early May. And to worsen the situation, we learnt last week that the European Commission are officially proposing a full ban on Russian crude and oil product imports by the end of the year. That is not good news at all for the consumers of importing countries like Seychelles, given the ripple effects it is causing across oil markets.”

It is an undisputable fact that energy markets worldwide are dealing with massive disruptions to supply following Russia's invasion of Ukraine and subsequent sanctions slapped on Moscow by the United States and its allies. The more worrying factor is that no economist or political experts can predict how it is going to end. Industry watchers say Russia's invasion of Ukraine has had its effect while experts from the IEA (International Energy Agency) see these price hikes continuing. “Russia is one of the world’s largest producers of oil and gas, so any disruptions to its production processes have a global impact,” Mrs Romain explained. “Russia produces 11.5 million barrels of oil each day, after US and Saudi Arabia and is also the second largest crude exporter globally. The international commodity markets could get much worse if the war in Ukraine drags on and that’s what we must be prepared for.”

As if matters were not bad enough, this week the OPEC+ group agreed to leave its production plan unchanged, despite aiming to boost crude oil production in June by 432,000 barrels per day. Even if the cartel has decided to keep the production plan as it is, many country members are finding it hard to ensure nominal production.

“It is true that while OPEC+ group is sticking to its policy of modest monthly increases, many of its members are not pumping to their quotas and the group overall is around 1.5 million barrel per day below its quota. The lack of supply is a reality as these countries are already struggling to meet their output targets as demand for crude is rebounding following the easing of lockdown restrictions. These events are happening against a backdrop of low oil inventories globally against a market with high price volatility,” noted Mrs Romain.

In Seychelles, fuel prices show no sign of relief for users who are facing high cost of filling up. Motor Gasoline is peaking at R23.48 a litre while the diesel or gasoil price is continuing its upward trend at R24.78 a litre.

“It is always important to understand how petrol prices are determined in Seychelles,” Mrs Romain added. “As a country heavily reliant on imports, both the global cost of crude oil dictate what we pay on the forecourt. As opposed to the average of last year when Seypec was disbursing USD7 million a month on its import bill, today Seypec must pay some USD12 million for the same volume of products. This represents a massive 71% increase in the monthly average cost Seypec pays to meet its domestic fuel demand for 2022 as compared to 2021. And we can consider that we are lucky to have the rupee exchange rate to the dollar easing up these days which is buffering the high import cost increases.”

This buffer effect of the favourable USD / Rupee exchange rate has tempered the potential increases that the country would have had to face, the national petroleum company reports. Motor gasoline has increased by 14% since January from R20.42 to R23.48 in April, a R3.06 increase. Similarly, diesel went up by R4.83 a litre, representing 24% increase, from R19.95 to R24.78.

The global prices that have been seen for end of April and early May have been high and unfortunately for motorists, this is going to cause further increases at the pumps for May and June. All predictions tend to show that high fuel costs will be with us for the foreseeable future, and it is not just down to the crisis in Ukraine. High energy costs are also due to a demand surge as the world emerged from lockdown. Further, another aspect of the problem is that relatively low barrel prices in recent years have put plans to drill for new reserves on hold. While the current high prices may increase interest in exploring new reserves, it can take years for new wells to come on stream in volumes required to affect the market. Therefore, there is still plenty of uncertainty in the markets which is leading to prices jumping around quite significantly. 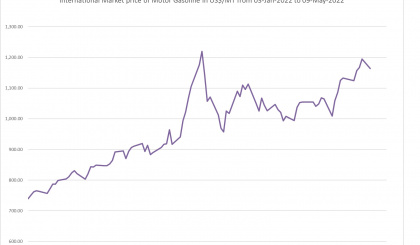 Analysis of Price Structure in Seychelles by the Central Bank of Seychelles |04.03.2022