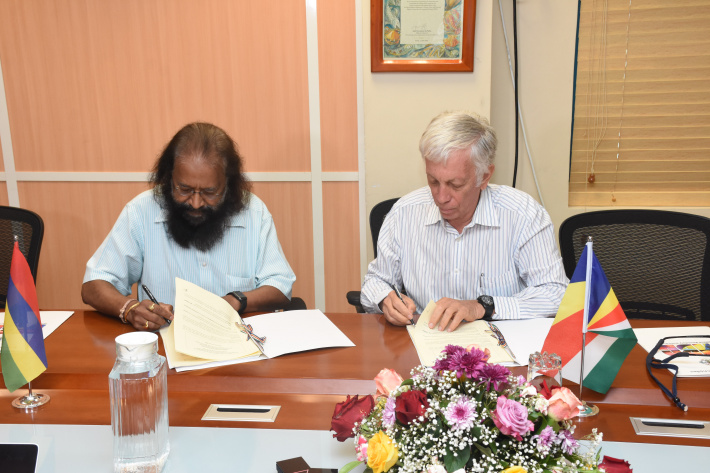 New firm to conduct survey on hydrocarbon in the region

A new company, CGG, is being appointed to conduct a survey on hydrocarbon in the region.

This came to light at the 22nd meeting of the Mauritius-Seychelles Joint Commission of the Extended Continental Shelf in the Mascarene Plateau region hosted by the department of Blue Economy.

The meeting, which was held yesterday in the conference room of the Ministry of Fisheries and the Blue Economy, was long overdue due to the pandemic.

After the joint-commission meeting, they also signed the minutes of the meeting.

To recall, the Joint Management Area (JMA) of the Extended Continental Shelf (ECS) of the Mascarene Plateau was formally established in 2012 by the signing of a treaty between the two countries.

The JMA is the mechanism of joint jurisdiction between Seychelles and Mauritius over an area of the seabed and its underlying sub-soil in the Mascarene Plateau region. It excludes the water column and living organisms above the shelf.

Ambassador Jagdish Dharamchand Koonjul from Mauritius shared that “within the two days of meeting, on the technical side we have progressed considerably and we made some decisions that we will recommend to the Mauritius-Seychelles Joint Commission. We have discussed the harvest of sea cucumbers where Seychelles and Mauritius will work together in order to know how much stock we have in the region of Saya de Malha. With this decision we will both be able to benefit from the joint management of this area.”

Ambassador Koonjul also announced that a new company, CGG, will be recruited to conduct a survey on hydrocarbon in the region. CGG is a global technology and HPC leader that provides data, products, services and solutions in Earth science, data science, sensing and monitoring.

“Initially, the company Spectrum was supposed to do the survey but when it changed its parent company, it could not follow up with that. Why this new interest? It is all because of the current world situation where the price of fuel has gone up. There is a necessity to look for these products and if we have the opportunity to exploit this opportunity, why not! We are already starting discussion on our strategic plan for the next three years and define each country’s role and also talked about a road map.”

Philippe Michaud, consultant at the Ministry of Fisheries and the Blue Economy, noted that in the two-day technical meeting, the two countries discussed the research project to be done in the zone, participation of Seychellois scientists in the UNDP financed project and also the possibility for Seychellois fishermen to harvest sea cucumbers in this zone.

“It is a long road but it is success on international level as it is very rare for two countries to agree to work on a common zone. Different activities are being done and will be done soon. The zone is approximately 400 square kilometres and belongs to the two countries and we have had our legal team to work on the terms and we want both countries to benefit from this zone.”

Mr Michaud also explained that the two countries also talked about the security element of the zone. “All costs and earnings will be shared between the two countries. Once this zone starts generating profits, an office will be based in Seychelles and the director will be Mauritian,” noted Mr Michaud.

The principal secretary for the Blue Economy, Kenneth Racombo, was the head of the Seychelles delegation and N.K. Ballah, the secretary to Cabinet and head of the civil service headed the Mauritian delegation.