Seychelles gifted with two shiplights from Italian government |09 May 2022 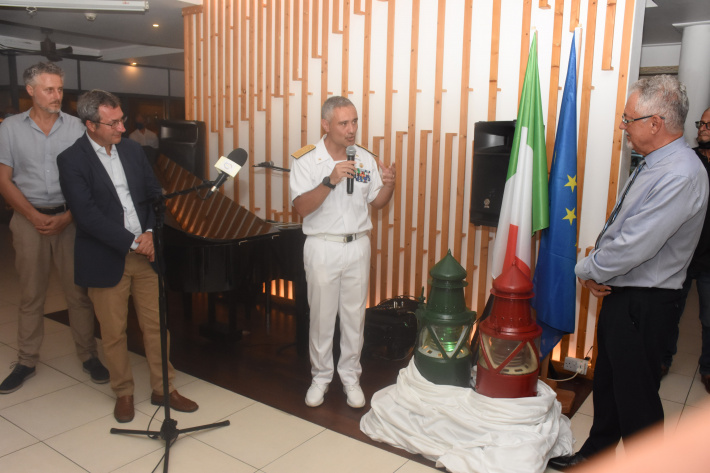 The Seychelles National Museum has been gifted with two large ship lights from the Italian government as a mark of continued bilateral friendship.

The two lights ‒ red and a green ‒ were used at night for guiding ships from open waters into the port entrance.

Also during the ceremony, the former consul of Italy to Seychelles, Claudio Izzi, was decorated with the rank of Knight of the Order of the Star of Italy by Dr Pieri on behalf of Italian President Sergio Mattarella. The decoration was for his contributions to the advancement of bilateral relations between Italy and Seychelles and also for the protection of Italian tourists and Italian nationals living in Seychelles.

Mr Izzi was named consul of Italy in 2004 and ended his tenure in 2019. He said his consul mandate for the past 15 years had not been an easy task but he tried the best he could to make every single Italian happy. He added that he was also happy and proud to have also assisted in cementing the good friendly relation between Italy and Seychelles.

Speaking about his 15 years as consul of Italy, Mr Izzi said “it was extremely interesting, extremely rewarding. I’ve been very, very happy to be both involved in fosteringthe good bilateral relationship with the Seychelles government and the Seychellois people and at the same time help the Italians who moved to Seychelles and Italians who came here on holidays.

“It’s been a very comprehensive task altogether, meeting a lot of people, holding different portfolios and I am very happy with what I’ve achieved.”

Mr Izzi noted that Italians and Seychellois people are also happy with the work he has done as a consul. He thanked the people of Seychelles for welcoming him in the country and for accepting him among us for the past 33 years.

Apart from being his country’s consul, Mr Izzi is well known in the craft and jewelry business through his former company ‘KreolOr’ which under his guidance from 1990 to 2019 produced over 40,000 pieces of luxury items.

Addressing the guests at the ceremony, Rear Admiral Bondi said the two lights are quite ancient and they have a historical value which is more than the current lights being used in the Italian ports at the moment.

“I hope that you(Designated Minister Ferrari) will appreciate this present from the Italian Navy for the Seychelles government. This is for us the most important thing which shows the sign of our friendship and the strengthening of our relationship,” said Rear Admiral Bondi who thanked the country for its continuous support provided to the Italian Navy.

Rear Admiral Bondi is the force commander of the EU NAVFOR Operation Atalanta in the Indian Ocean and his men on board the vessel Carlo Bergamini along with those onboard the French Navy ship Floréal, also part of the EU NAVFOR Operation Atalanta, are in the country to strengthen relations with Seychelles and also to allow the seamen to take some rest after conducting various missions at sea.

On behalf of the Seychelles government, Designated Minister Ferrari thanked the Italian navy for the donation and also for their support in terms of contributions through the EU NAVFOR Operation Atalanta in the region. He added that the country attaches so much importance to their presence and operations being carried out to fight illegal activities in the region.

“As for those two lights, I think they are very symbolic of our relationship. As a symbol of our friendship, I pray that they guide many Italianvisitors into Port Victoria so that they can enjoy our country,” said Designated Minister Ferrari. 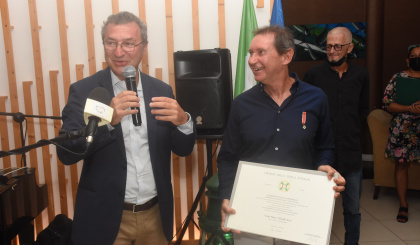 Former consul of Italy to Seychelles, Claudio Izzi being decorated with the rank of Knight of the Order of the Star of Italy by Dr Pieri on behalf of Italian President Sergio Mattarella (Photo: Patrick Joubert)