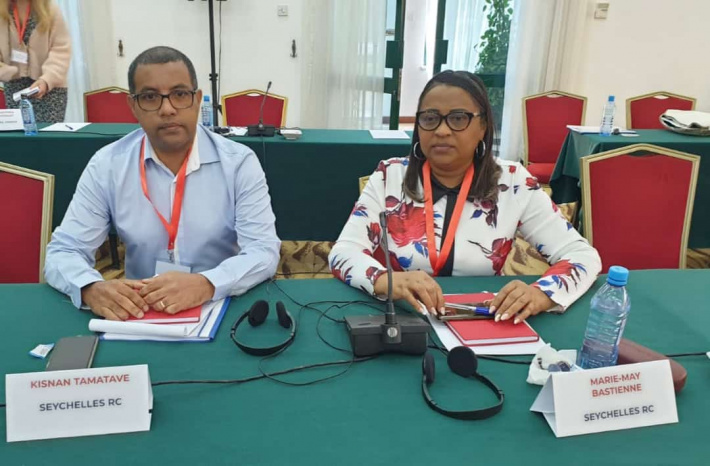 Mr Tamatave and Ms Esparon at the meeting (Photo: Contributed)

KisnanTamatave, president of the Red Cross Society of Seychelles, has been elected vice chairperson of the steering committee of Red Cross Net, a sub regional network of National Societies.

The voting took place during the Red Cross Net meeting of the Eastern and Indian Ocean countries held on Wednesday May 4 at the Boma Hotel, Nairobi Kenya. Robert Kwegisa of the Ugandan Red Cross Society is the new RC Net president.

The steering committee is also composed of other ordinary members from the Comoros and South Sudan.

In his address, International Red Cross Red Crescent president Francesco Rocca congratulated the National Societies for their immense work done during the Covid-19 and other interventions carried out.

He emphasised on the importance of integrity while delivering their services as Red Cross National Societies.

"We need to be honest with each other, to understand each other,” president Rocca said. He also spoke of the effects and impacts of the Ukraine war, migration and the need for the Red Cross to have a "greater voice".

Also present at the meeting, International Federation of Red Cross and Red Crescent (IFRC) secretary general Jagan Chapagain said: “We cannot allow other humanitarian situations to be completely ignored whilst we are supporting Ukraine.We also need to support others around the world.”

The Red Cross Society of Seychelles (RCSS) was represented at the meeting by its president KisnanTamatave and secretary general Marie-May Esparon.

On the sideline of the RC Net meeting, the RCSS delegation met with Mr Roca to discuss some of the main challenges of the National Societies such as resource mobilisation, revamping of the  water rescue programme, provision of ambulance services and bilateral exchanges in an effort to make the National Societies more self-sustainable. The RCSS president also extended an invitation to Mr Roca to visit Seychelles this year.

There are altogether 45 National Societies in Africa.

The RC Net meeting took place from May 3-5 and was followed by another two-day working session for Red Cross presidents and secretary generals of the Indian Ocean cluster.