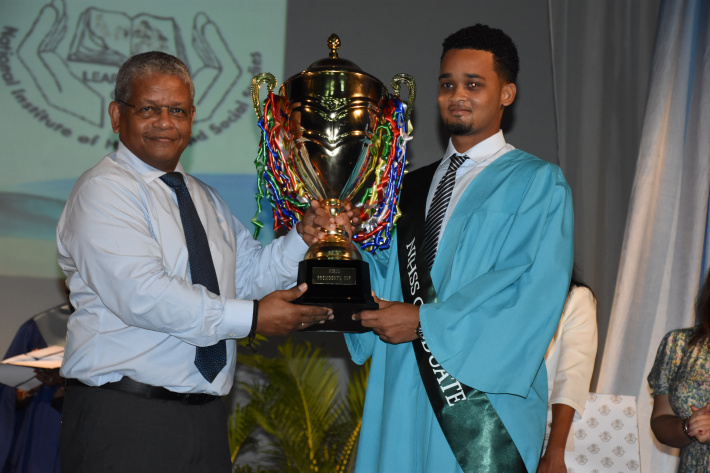 Eighty-one students who successfully completed their studies at the National Institute of Health and Social Studies last year received their awards and certificates during their graduation ceremony yesterday morning.

During the ceremony held at the University of Seychelles (UniSey) auditorium, Anse Royale, 21-year-old Curtis Poris, who studied environmental health and science for three years, was the outstanding student and his great performance earned him the President’s Cup along with other prizes.

“It is my hard work, discipline and obedience to my parents and lecturers that made me win the President’s cup for outstanding learner,” claimed Curtis after he had received his cup and laptop from President Wavel Ramkalawan and other prizes from representatives of the different sponsors.

The young man’s other prizes include a scholarship sponsored by the Agency for National Human Resource Developmentand a certificate.

“I had to push myself to do it. I went to primary school at Bel Eau before moving to Pointe Larue school. I was not someone who excelled in class but in post-secondary I started to take my studies more seriously. I also took part in various school activities. I will continue to work in public health and later I will consider continuing my studies,” said the young man.

Curtis is described as a role model to peers in both attitude and behaviour, demonstrated through his excellent records of attendance, punctuality, good sense of responsibility and accountability, as well as ability to adapt in different work-based settings. He also demonstrated excellent academic performance throughout his studies and is somebody who has been well appreciated by his peers, colleagues, industry staff and NIHSS personnel.

Two new awards have been introduced this year and these are the overall best in practice award which has been won by Martha Hoareau and the overall best academic performer clinched by Gerve Teeroomoojee.

Nineteen (19) students graduated with a diploma in Biomedical Laboratory Sciences and the best performers in this course are Isha Alcindor (best academic performer) and Anellie Albert (best in practice awardee).

Fourteen students graduated with a diploma in Nursing and the best performers are Tracey Didon and Erin Octave.

Eight students graduated with a diploma in Nutrition and the best performers are Marie-Michelle Henriette and Reehan Ernesta.

Twenty-three students graduated with a diploma in Social Work and the best performers areVerina Helene and Loraine Mondon.

NIHSS acting director Ibrahim Ali talked about the journey of the students with the establishment during the last few years and encouraged each and every one of them to continue to persevere.

“No workplace is perfect, and for each role, some things are desired less than others. However, in my experience, there are opportunities in each position, which when seized, breakthroughs will happen.”

As usual at the end of the ceremony, President Ramkalawan interacted with the new graduates and congratulated them for their hard work.