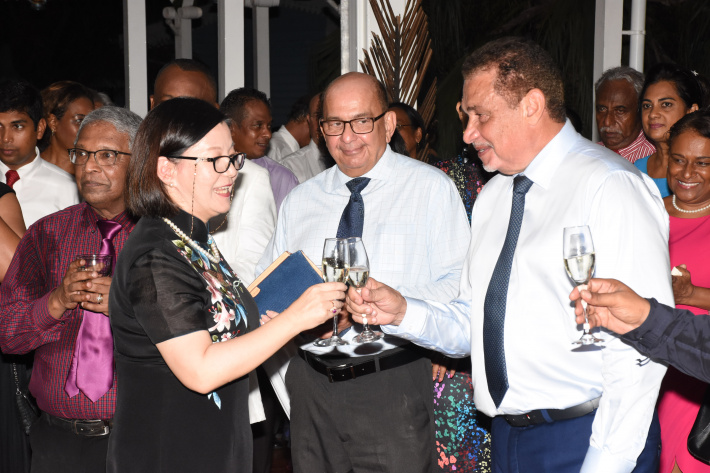 The bonds of solidarity, friendship and cooperation that we forged over the years will be central in our quest to reinforce the solid foundation of our relations with all the countries and organisations for our mutual benefit, Minister for Foreign Affairs and Tourism, Sylvestre Radegonde has said.

He was speaking at the annual diplomatic cocktail hosted by his ministry to thank the diplomatic and consular corps for their continuous support and relentless efforts to strengthen the friendship and improve the cooperation between Seychelles and their respective countries.

Minister Radegonde began by thanking all the diplomatic representatives of the various governments, international organisations and agencies for their multifaceted support to Seychelles over the years, not least during the Covid-19 pandemic.

Support which he said, without doubt, contributed to the well-being and prosperity of the people of Seychelles.

“Recent events have shown the importance of our partnership in tackling issues that transcend geographical boundaries, while we are all caught in the same storm of pandemics, conflicts and climate change no matter what corner of the world we find ourselves, and that it can only be through concerted efforts that we can effectively navigate our way through these global challenges,” Minister Radegonde remarked.

The Foreign Affairs and Tourism Minister further noted that Seychelles does its best to offer value in its partnership, and despite being a small country, we are playing a big role, punching above our weight on important international issues.

“We are one of the leading voices on climate change, ocean governance and environment protection. We have the lowest levels of corruption in Africa and the highest regard for human rights, and we always make judicious use of all assistance provided to us,” said Minister Radegonde who further added that we hope to serve as a model for the region and beyond as we have shown what can be achieved with vision and dynamic leadership and strong principles of good governance.

“Our foreign policy is geared to implement President Ramkalawan’s blueprint for a transformed Seychelles, and this, we believe will be achieved by harnessing the opportunities from relations we have built, nurtured and solidified with our international partners,” further added Minister Radegonde who also noted that the Seychelles government will continue to pursue an independent foreign policy, guided primarily by our national interests and conviction as a sovereign nation.

He said our development aspirations remain anchored in our ability to seize the opportunities from partnerships that we have created, to find innovative ways to transform our economy.

Addressing the gathering on behalf of her colleagues, Chinese Ambassador to Seychelles Guo Wei who is equally the dean of the Seychelles diplomatic corps noted that they are honoured, pleased to have done their duties in their capacities and contributed in one way or another for Seychelles which she said is always walking on the path of prosperity, liberty and democracy.

She added that under the strong leadership of President Ramkalawan, along with the unity of its people, Seychelles has attained great accomplishments with the economy well recovering, well-being of the people greatly improved, social stability and sustainable growth effectively insured and national governance and efficiency of state institutions steadily advanced.

Ambassador Wei further noted that we are witnessing continued progress in the building of a united, stable and strong nation, while the achievements are recognised by the international community.

She said even if the Seychelles diplomatic mission is small, it is a big family.

“As diplomats, we are here in this beautiful country with the aim of promoting the bilateral cooperation and friendly relationson the basis of mutual understanding, respect and support,” noted Ambassador Wei who further added that they should also enhance exchanges with each other and jointly maintain the harmony and unity within the mission.

On behalf of the diplomatic corps, Ambassador Wei extended sincere appreciation to the entire team of the foreign affairs department for their professionalism, hard work, dedication, high efficiency, support, hospitality and friendship which she said make their work as diplomats easier and make them feel at home.

After toasting to solidarity, friendship and cooperation the guests had the chance to enjoy some local cultural presentations and light entertainment throughout the evening.

Despite the change in format, the annual event has always maintained its original purpose which is to thank the diplomatic and consular corps for their continuous support in strengthening friendship and cooperation between Seychelles and their relevant countries. 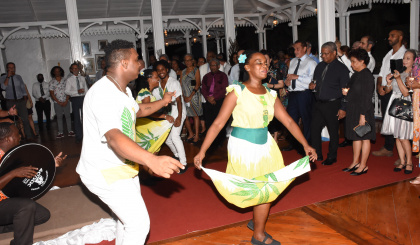