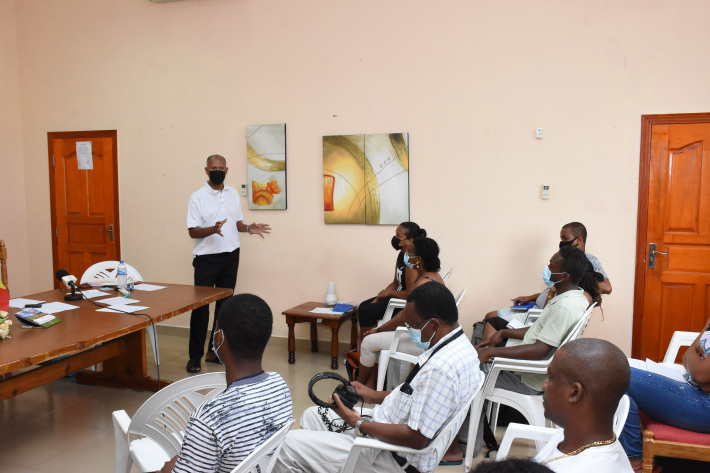 Twenty-three physical education teachers and trainers have followed a half-day training, education and awareness workshop during which they have boosted their understanding and learned how best to tackle obesity in school children they work with.

The training session held at the National Sports Council (NSC) boardroom on Monday morning comprised different presentations given by freelance lecturer Maurice Denys and Stephanie Desnousse, a nutritionist from the Public Health Authority.

Also present at the launch of the training were NSC chief executive Jean Larue; director general for early childhood and primary education Cyril Pillay, director of community, leisure and sports for all, Francis Remy; and principal sports officer Dorothy Isidore among other concerned parties.

Addressing the delegates, Mr Larue stated that from statistics gathered the country is going through a transition phase whereby it has recorded a 30% obesity rate in the population especially amongst the youth. He added that to tackle the situation, NSC must first target the PE teachers. He emphasised on the correlation between sports and health, highlighting the importance of both.

“The NSC is stepping up its efforts to combat obesity among young people in the country and thus the importance of the training workshop to boost PE teachers’ understanding of the issue so that they know how to tackle the problem and help their pupils through advice on their nutrition and mindset change. The aim of the workshop is also to re-launch an ongoing programme targeting school children in a bid to reduce the number of obese children country-wide,” Mr Larue stated.

Mr Pillay for his part noted that the Ministry of Education is also concerned about the obesity situation as the number of obese childrenis constantly increasing. He added that this is not conducive for their health and that something must be done at an early age, rather than wait until the pupilsare much older.

Mr Pillay remarked that PE teachers have a primordial role to play in tackling this situation.

In his presentation,Mr Denysstated that obesity brings about mental and physical challenges to pupils and he encouraged the participants to develop a winning mindset.

Mr Denys touched on physical activities but also emphasised on the importance of mental well-being. He focused mostly on mental training for athletes which is the systematic and consistent practice of mental or psychological skills for the purpose of enhancing performance, increasing enjoyment and creating greater self satisfaction.

From the presentation it came out that metal training is mostly neglected as there is a lack of knowledge and ease when teaching mental skills.

Mrs Desnousse’spresentation was based on healthy eating as a sustainable way to keep you healthy and prevent lifestyle diseases. She noted that it is important to encourage everyone to revisit their food intake as a result of the impact of Covid-19. The presentation was focused on the five food groups as well as having a regular eating habit.

Elvire Duval,a PE teacher at Anse Etoile school, said the workshop has allowed them to see what can be improved in schools and in the community. She stated that the workshop can help her to better help her pupils develop physically and mentally for a healthier lifestyle.

Former gymnast Duval hopes that at the end of the workshop they will be able to bring the skills they have learned into their curriculum as well as work closely with NSC and parents.

Sylvette Suzette,a PE teacher at Grand Anse Praslin primary school, said the workshop will help her work better and advise her pupils and other young people in the community as well.

Ms Isidore,for her part, stated that the workshop,which is conducted annually, was postponed over the last two years due to the pandemic. She added that it is an opportunity for PE teachers to come together to discuss and review their workprogrammes as well as bring in new techniques to better their PE activities.

“During the pandemic everything slacked down and many of the pupils gained weight. But now that the restrictions have been lifted considerably,NSC is readjusting the programme to bring about more interest in sports,” Ms Isidore remarked.

NSC has brought in more nutritionists for the programme and hopes to be assisted by parents, pupils and the community in general to better tackle the obesity concerns.

Ms Isidore hopes that NSC can reinvigorate the interest and passion of the pupils and people in the community.

She expressed disappointment at the turnout of PE teachers though, noting that NSC sent out emails to all the schools. Following the recent signing of a memorandum of understanding between the Ministry of Education and the Ministry of Youth, Sports and Family,it was expected that this would have been a great example of the collaboration to intensify health and fitness programmes in schools.