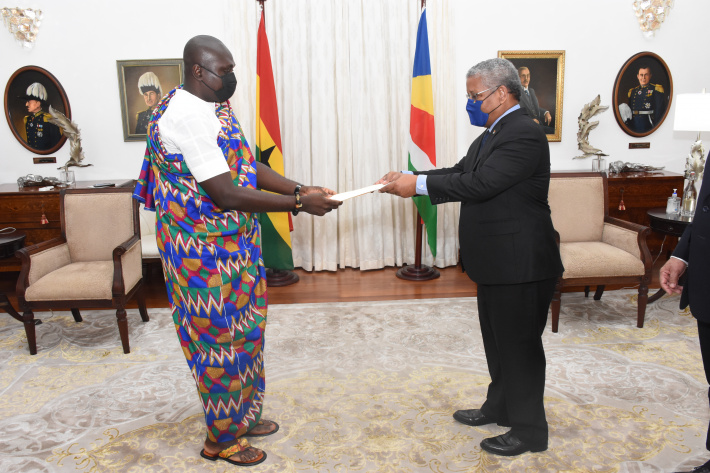 Mr Owiredu is the fifth Ghanaian high commissioner accredited to the Republic of Seychelles since Ghana and Seychelles established diplomatic relations on October 10, 1988.

After his meeting with the president, the new high commissioner noted that Ghana and Seychelles share strong historical ties.

“In the early 1900 when King Prempeh I of the Ashanti was exiled to Seychelles, he came with about 50 members of his family. He came to live here for some 24 years and your people hosted them and treated them like a family. When the British allowed him to return to Ghana some did not go because of the relationships they have cultivated. Since then they have formed the base of the relationship,” said High Commissioner Owiredu.

He added: “Today (Tuesday), the meeting with the president went well and the discussions we had were how to strengthen the relationship further. We already have five Ghanaian teachers here and the president thinks that it will be good if we increase the number of teachers. That will be part of the agreement we are seeking to establish with Seychelles.”

High Commissioner (HC) Owiredu also noted that Seychelles and Ghana have signed five agreements among those a general cooperation agreement, avoidance of double taxation, visa waiver for both countries, and re-exportation of tuna from Seychelles.

“So far we are doing well. Seychelles is doing well in the tourism sector due to the boldness of the president and the measures taken by the government. I want to take this relationship a notch higher to try and help each other. Ghana can also learn so many things from Seychelles,” shared HC Owiredu.

Mr Owiredu has an impressive political career. From September 2008 to March 2017 he was the director of international affairs at New Patriotic party headquarters; from April 2017 to January 2021 he was the deputy minister for Foreign Affairs and Regional Integration and has since June 2021 been Ghana’s High Commissioner to South Africa.

The high commissioner also called on Vice President Ahmed Afif. Later during his visit he will pay courtesy calls to the Speaker of the National Assembly Roger Mancienne, Designated Minister Jean-François Ferrari, ministers, dean of the diplomatic corps and the secretary general of the Seychelles Chamber of Commerce and Industry.

Mr Owiredu will also meet with members of the Ghanaian community living in Seychelles. He will be based in Pretoria, South Africa. 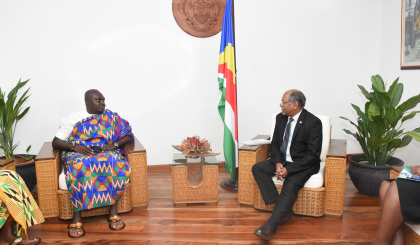