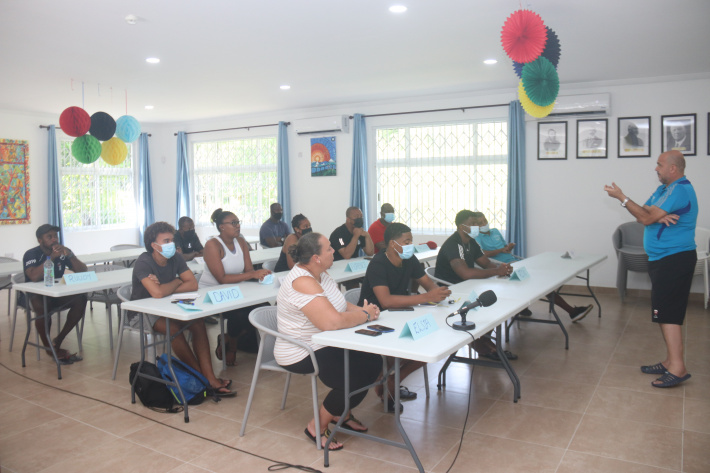 Mr Benhamida sharing knowledge with the participants during yesterday’s session

It was the president of Sogca, Antonio Gopal who opened the technical coaching course in the presence of principal secretary for Youth and Sports, Ralph Jean-Louis, chief executive of the National Sports Council Jean Larue, and the chairman of the Seychelles Volleyball Federation Ronald Wong.

The coaching course which will include theory and practical sessions will end on Friday with pitch game coaching evaluation sessions for the participants with kids under-16 years old in the morning and senior players in the afternoon.

Addressing the participants and all present, Mr Gopal said Sogca was very happy that SVF had chosen beach volleyball for the sponsored technical course as the country stands a chance to win a medal in beach volleyball in high level competitions like the Olympic and the Commonwealth Games as opposed to indoor volleyball.

On our agenda we are hoping that beach volleyball will have the chance to win an Olympic medal for Seychelles,” said Mr Gopal who called on the participants to learn from the experienced Benhamida.

Earlier Mr Larue, CEO of the National Sports Council (NSC) said “the NSC is always there to assist and support because beach volleyball has taken a new dimension. In 2023, it will feature in the Indian Ocean Islands Games and I wish that we can have a team who will come back with a gold medal.”

For his part, PS Jean-Louis said: “I feel so enlightened and happy when I see a lot of young coaches taking up the challenge of upgrading their level in coaching to develop this fast growing sport in our country, which is beach volleyball. We know that we can go very far if we concentrate our energy in developing this sport.”

Mr Benhamida stated that as the four days will not be enough given the amount of things the participants have to learn about the different aspects of technical coaching of beach volleyball, they will have the chance to continue to follow the course online, especially in relation to sport management, for one up to two months for free on his own e-learning platform.

On behalf of the SVF, Mr Wong thanked the Olympic committee for having accepted to facilitate the course and Mr Benhamida for sharing his expertise in the development of the sport in the country.