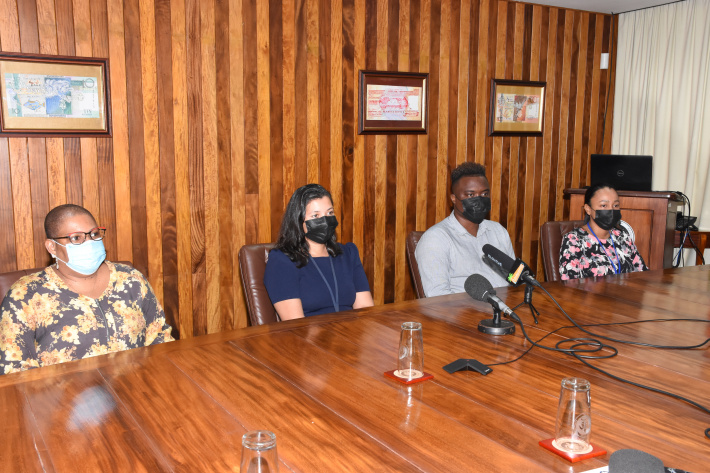 Governor Abel and her team during the presentation (Photo: Joena Meme)

The year 2021 has been more successful than 2020 in terms of economic growth, Central Bank of Seychelles Governor Caroline Abel has said.

Ms Abel made the statement yesterday morning at the Central Bank of Seychelles (CBS) boardroom when she along with economist Trudy Lucas, financial and risk analyst Ron Bonne, and director of banking services division Noemie Louise presented the annual report 2021, the reserves management report 2021 and financial statements 2021.

“In 2020, with the Covid-19 pandemic, the whole country was shaken up as the tourism sector was badly affected. Together with the government we had to use part of our reserves to make sure the country has enough provision. In 2021, the authorities were able to breathe as we did not have to use our reserve. The tourism sector picked up, thus changing the economic situation of the country. But still in 2021, the economic activities were not at the same level of 2019. Now entering 2022, we forecasted a positive year, but we have a new element which is the war and we have to make sure that the policies in place will help the country remain stable,” said Governor Abel.

Speaking about the reduction of debt by 25% in 2021, Governor Abel noted that before the pandemic, government had set a target to reduce our debt to 50%. “This was sustainable and the more we reduce the debt, the better it is for the country. In 2021, we have to understand that our rupee appreciated and there are two components of government’s debt – loan in rupees and loan in foreign currency. In 2021, government emphasised on the extension of maturity of our debts and to make the bonds long term. The second component of the debt involves the adjustment in the exchange rate and the loan in euros and dollars became cheaper and we needed less rupee to pay our debt. In the long term, government should make sure to have a proper loan structure,” she said.

Giving a summary of the annual report, economist Trudy Lucas talked about how according to the World Economic Outlook (WEO) January 2022 the global output grew by 5.9% in 2021.

“The world economy recovered from the downturn of 2020 caused by the Covid-19 pandemic to achieve one of the most robust post-recession recoveries on record. The world had access to vaccines and the effectiveness of the vaccination campaigns and economic activity was generally supported by accommodative fiscal, monetary and financial conditions. We also saw that the accommodative monetary policy stance was maintained in most economies and higher international commodity prices,” explained Ms Lucas.

She added that the higher economic activity in the country led to an estimated expansion of 7.9% caused by a rebound in the performance of the tourism industry.

“Seychelles was upgraded by Fitch Ratings from ‘B’ to ‘B+’ with stable outlook; had a comprehensive vaccination campaign and we saw the strengthening of the rupee ‒ on average 4.1 per cent vis-à-vis the US dollar. Still as many countries of the world we saw the inflationary pressures ‒ y-o-y: 7.9% in December 2021. Measures to support the economy and mitigate the impact of Covid-19 on businesses and individuals continued but labour market challenges persisted. Seychelles also embarked on a 32-month arrangement under an Extended Fund Facility (EFF) with the support of the IMF (International Monetary Fund),” said Ms Lucas.

Within the year we saw an increase of 4% in the output in the fishery sector and the agricultural sector expanded by 1%. Manufacturing of fishery products fell by 7% driven by 7.9% decline in production of canned tuna.

In 2021, there was an improved performance in the tourism industry and visitor arrivals rose by 59%, Tourism earnings were estimated to have expanded by 40% to amount to US $310 million.

Ms Lucas noted that the number of individuals employed in the public sector rose by 1.9% and the national unemployment rate can be assumed to be lower than 3.3%. The average earnings declined by 3.6%. Average earnings across private, parastatal and public sectors fell by 4.6%, 4.0% and 3.9%, correspondingly.

Reduction in minimum reserve requirement (MRR): In July 2021, government conducted a liability management operation (LMO). This was part of the government’s strategy to improve debt sustainability and reduce rollover risks. In order to allow for a liquidity buffer and encourage participation of commercial banks, the MRR on rupee deposits was lowered from 13% to 10%.

Contraction of 2.7% in total credit

At the close of 2021, the total stock of outstanding domestic credit stood at R15 billion. Credit allocated to the private sector declined by 12 per cent (or R1,192 million) in 2021; of which foreign currency loans reduced by 32 percent in rupee terms reflecting the valuation effects primarily as a result of the appreciation of the Seychelles rupee. Local currency loans decreased by 1.2 percent and credit allocated under the private sector relief scheme was higher in 2021 by R257 million. Loans extended to public entities decreased by 15 per cent (or R130 million). Claims on government was higher by 19 percent (or R905 million). This was consistent with the increased issuance of treasury securities in 2021, in particular treasury bonds.

Governor Abel concluded the press conference by saying there is an ongoing dialogue with partners to diversify the economy, but tourism will stay in the short term as the engine of the economy.

“It is a dilemma for the CBS to have a relaxed monetary policy as inflation keeps going up. At CBS we have to make sure that the system remains strong. In 2023, if the economic activity accelerates, CBS will announce new measures.”