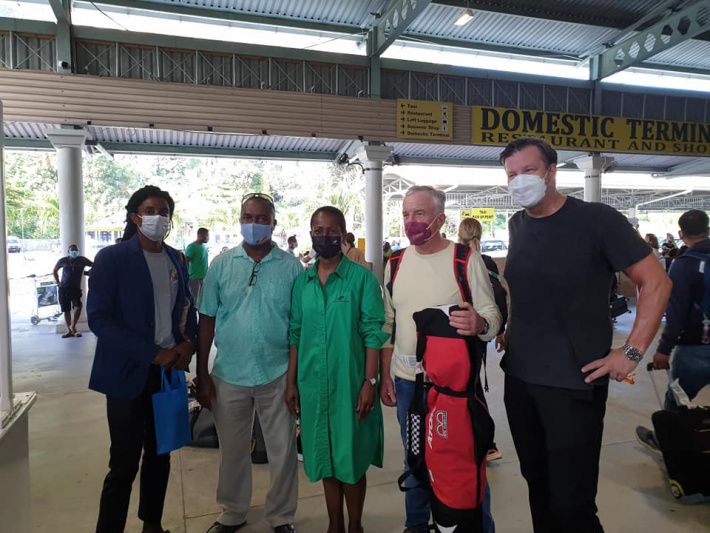 German extreme swimmer, André Wiersig who is planning to make history by becoming the first person to swim individually across the ocean between Mahé and La Digue, approximately 51km, arrived in the country on Saturday.

The event, named the Open Ocean Project (OOP) and scheduled for this month (between 9-24 tentatively), seeks to enhance the visibility of Seychelles as an ideal destination, promoting its pristine environment, its strong stand for sustainability, as well as its beautiful versatile features to host sports events and finally showcasing its rich cultural heritage.

It falls under the Tourism 3.0 Concept which is a fusion of sports, culture and tourism enveloping the sustainability agenda.

Wiersig was welcomed on his arrival by director general for destination marketing at the department of tourism Bernadette Willemin, chief executive of Tour Bookers (Seychelles) Mervin Cedras and representative of the National Sports Council (NSC) Alain Alcindor.

His early arrival will permit him to become accustomed to the local weather conditions, and to mentally and physically prepare for the event, while his team will fly in later during the week.

The event has been initiated in the spirit of the economic transformation agenda and the need to diversify the tourism and sports sector, by local affiliated private company Tour Bookers and the Seychelles Chamber of Commerce and Industry (SCCI), supported by the government of Seychelles and various other partners.

An extreme swimmer, marine ambassador and Speaker,Wiersig is the first German swimmer and the 16th person worldwide who has successfully completed the Ocean’s Seven, the greatest world challenge in long-distance swimming.

A true man of the ocean, Wiersig joined a swimming club at the age of 11 and has kept his beautiful story with the waters ever since.

In his youth, he was active in triathlon first over the Olympic distance, later in the Ironman.

He is an ambassador of the German Ocean Foundation and is strongly involved in multiple ocean sustainability projects.

Through his participation in the Open Ocean Project, Wiersig aims to promote Seychelles’ efforts for sustainability focussing on the ocean as means of support for the local people and habitat for various species including some endangered ones.

During the Open Ocean Project which is a collaborative effort of the private sector and the government, Wiersig will swim individually across the waters between Mahé and La Digue to promote sustainability and the ocean as livelihood and habitat infusing the concept of sports, tourism and culture.

The project is also receiving the backing of environmental activist, founder and board member of the German Ocean Foundation Frank Otto.