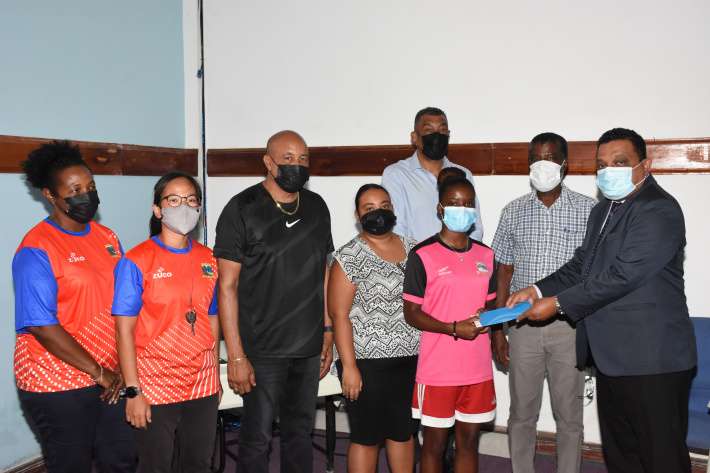 Mr Abeysinghe hands over an air ticket to a payer (Photo: Joena Meme)

The Seychelles women's national football team have been presented with their air tickets by Srilankan Airlines to take part in a friendly outing in Singapore.

It was the airline’s regional manager for Sri Lanka and the Indian Ocean, Jayantha Abeysinghe who presented the tickets to the players and team management during a short ceremony held at the Maison Football yesterday afternoon. The airline has offered the Seychelles Football Federation (SFF) with a special package for the displacement of the women’s national team and this also includes the upgrade of two tickets from economy to business class, upon return, for two team officials. He was accompanied by the airline’s station manager in Seychelles, Franky Hetimier.

On behalf of the Seychelles women's national football team, secretary general of SFF, Georges Bibi said: “I would like to thank Sri Lankan Airlines for this gesture and I also take the opportunity to invite the airline to have a discussion with the federation on a long term relationship where we can use the airline for our future trips for our men’s and women’s national teams, including the youths teams.”

“The upgrade of two tickets is to illustrate our gesture of goodwill to the Seychelles Football Federation for choosing our airline. We are very happy to have provided the SFF with a very economical and convenient solution, especially in these days. We will be very happy to be associated with the federation on its future trips in a long lasting relationship,” said Mr Abeysinghe who noted that the airline is connected to many other destinations in the Far East, including India at a competitive price and further more it has increased its number of flights to Seychelles to three times a week.

In its effort to be listed on the Fédération Internationale de Football Association (Fifa) world ranking, the Seychelles women's national football team will be travelling to Singapore next month to take part in a friendly international competition alongside hosts Singapore and Papua New Guinea.

The 19 players and six officials leave the country on April 2, 2020 for their first game against the home side Singapore on April 4, 2022 and their second against Papua New Guinea is slated for April 8, 2022.

In their first outing in September 2021 in the United Arab Emirates (UAE), the Seychelles’ women’s football selection under the guidance of head coach Angeline Chua Ki Yi, a former Singapore international player, played two friendly matches in Dubai against the UAE women’s national team who were preparing for the Asian Women’s Cup qualifiers. The Seychelles team lost both matches on 1-4 and 0-4 scores.

The second outing for the Seychelles’ women’s football team was in the Maldives for a three-nation tournament held in February 2022. They lost the first match 0-1 against the home side before winning against the same team on a 4-0 score. In their third match, they lost 0-2 to the Saudi Arabia who were making their international debut.