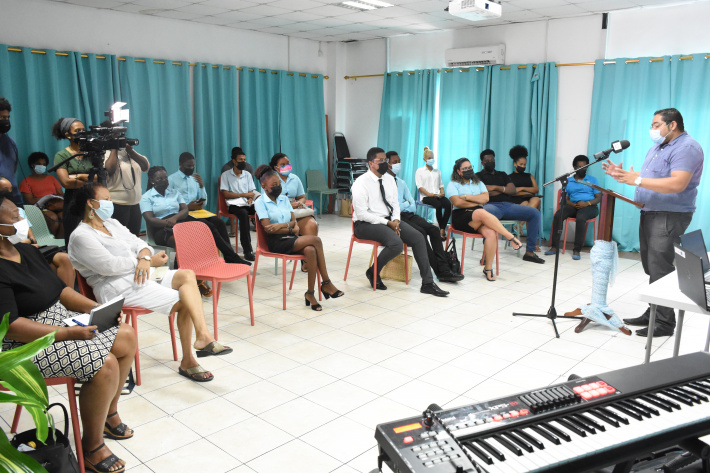 Mr Laurence addressing the gathering during the launch of the competitions on Saturday (Photo: Jude Morel)

Dreams are not reserved just for politicians, or high-ranking government officials, but it is for each and every individual, chief executive of the Citizens Engagement Platform Seychelles (Ceps) Alvin Laurence has said.

He was speaking during the launch of the platform’s talent competitions under the theme ‘Mon Rev’ which include song, poetry and essay.

The aim of the competitions, which is a joint initiative of Ceps and the American Study Centre of Seychelles, is to extend citizens’ participation in sharing the aspiration of the country.

The official launch took place on Saturday during a special activity at the Ceps conference room at the Orion Mall held to commemorate this year’s Martin Luther King Day which was on Monday January 17.

Mr Laurence noted that all the entries in the competitions should serve as aspirations and influences for politicians, giving them a broader view of what the ordinary citizens really feel, or dream about.

He added that the entries should also serve as a guideline for all those who take decisions on behalf of the people of Seychelles.

Mr Laurence also noted that nowadays, many decisions are being taken without the people being consulted, let alone get the chance to bring in their contributions.

He said, as civil society, the people need to gather, discuss and come up with innovative ideas to connect and share their dreams, while inspiring politicians who also need new ideas.

The poetry and speech competitions are divided into two Categories, precisely adults (18 years old and above) and less than 18 years old, while the song competition is open for individual, or group entries (including schools, families, or associations).

All entries should be in by the end of May, while the winners will be announced during the National Day celebrations in June.

Entry forms are available at Ceps or can be downloaded on monrev@ceps.sc.

Martin Luther King Jr. Day (sometimes referred to as MLK Day) is a federal holiday in the United States marking the birthday of Martin Luther King Jr and is observed on the third Monday of January each year. Born in 1929, King's actual birthday is January 15 (which in 1929 fell on a Tuesday).

The holiday is similar to holidays set under the Uniform Monday Holiday Act.

The earliest Monday for this holiday is January 15 and the latest is January 21.

King was the chief spokesperson for non-violent activism in the Civil Rights Movement, which protested racial discrimination in federal and state law.

The campaign for a federal holiday in King's honour began soon after his assassination in 1968.

President Ronald Reagan signed the holiday into law in 1983, and it was first observed three years later. At first, some states resisted observing the holiday as such, giving it alternative names or combining it with other holidays.

It was officially observed in all 50 states for the first time in 2000.