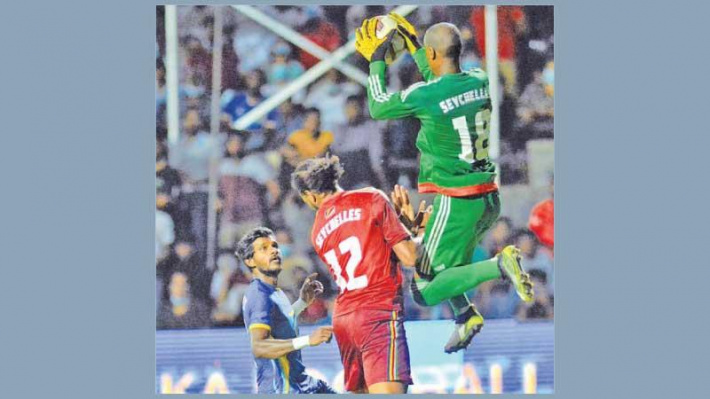 Goalkeeper Alvin Michel catches a ball against hosts Sri Lanka in the Prime Minister Mahinda Rajapaksa trophy competition. Seychelles will play Lesotho in the preliminary qualifiers of the Afcon 2023

One of Africa’s 12 least ranked teams, Seychelles will have to eliminate Lesotho inthe preliminary stages to progress to the main groupings draw of the 34th TotalEnergies Africa Cup of Nations 2023 in Ivory Coast.

The preliminary round draw for the 2023 Africa Cup of Nations (Afcon) qualifiers was conducted on Friday January 21 in Douala, Cameroon, host country of the ongoing Afcon 2021.

The other five pairing are as follows: High-flying Afcon debutants the Gambia will play Chad, Sao Tome will face Mauritius, Djibouti will meet South Sudan, Somalia will face Eswatini and Eritrea will clash with Botswana.

The preliminary round games of two-leg ties will be played between March 21 and March 29, 2022. The six winners on aggregate scores will join 42 other countries in a draw that will produce 12 groups with the winners and runners-up qualifying for the next Afcon tournament in Ivory Coast in 2023.

Although they are among the 12 least ranked teams on the continent of Africa, the Gambia have reached the round-of-16 stage of the ongoing Afcon in Douala after finishing second in group F behind leaders Mali despite being handed a challenging draw. The Scorpions of Gambia were impressive in winning two of their three matches ‒ beating Tunisia 1-0 thanks to a splendid half-volley by Ablie Jallow and edging Mauritania 1-0. They also drew 1-1 with Mali.

As for Somalia, they are making a return to the Afcon after a 34-year absence, while Eritrea are returning to the qualifying competition after missing a number of editions. Their first appearance was in 2008.

Coach Bothe could not be reached yesterday for his comments on the draw.

In October 2019, the country’s team bowed out at the hands of South Sudan in the preliminary round of the qualifiers for the ongoing Afcon 2021 being played in Cameroon.

Seychelles needed to put up a spirited fight to get at least a 1-0 win to progress to the group stage of the qualifiers, but instead they lost by the same scoreline at Stad Linite to be eliminated.

Following a narrow 1-2 away loss at the hands of the Bright Stars of South Sudan in the first leg match of pot five played at the Al- Merriekh Stadium in Khartoum, Sudan, Seychelles under Dutch coach Jan Mack stood a chance of going through. The 0-1 home loss meant they bowed out of the qualifiers on an aggregate score of 1-3.

After Darrel Damou inexplicably sent his 6th minute shot crashing against the post when it looked easier to score, the visitors netted the only goal of the game in the 71st minute through Joseph Nayar.

South Sudan joined Burkina Faso, Uganda and Malawi in group B of the qualifiers.

Meanwhile, earlier this month when announcing the postponement of theresumption of club football after the Christmas break over growing concerns by the health authorities about the new variant of coronavirus ‒ Omicron ‒ and the hike in the number of cases, Seychelles Football Federation (SFF) chief executive George Bibi told the media that the local football governing body will use the international break to get the national team together for training ahead of competing in the TotalEnergies Africa Cup of Nations (Afcon) 2023 qualifiers.