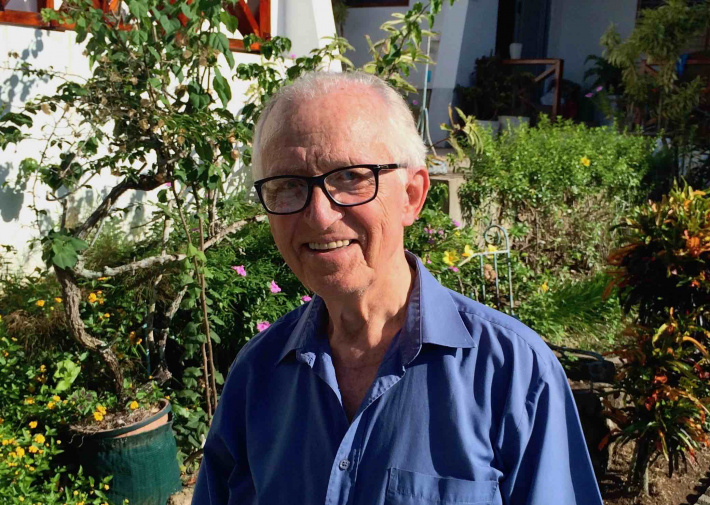 Bill McAteer in his garden at his Glacis home.

William (Bill) McAteer, the pre-eminent Seychelles historian, was made a Member of the Order of the British Empire (MBE) by Her Majesty the Queen in the UK’s New Year’s Honours.

The award is in recognition for his work in researching and documenting the history of the Seychelles.

He is the only person to have researched and published the entire history of the Seychelles from discovery to independence from original source material. His three books are the result of meticulous research of almost 40 years, travelling across the world. He has thus provided a permanent legacy for the people of Seychelles.

McAteer was born and raised in Glasgow, coming from a family of modest means. He was conscripted for military service at the end of WW2. He joined the Highland Light Infantry and served as a 2nd Lieutenant for three years, mostly in Northern Greece. He then studied at Glasgow University and thereafter joined the Glasgow Herald newspaper as a journalist. In 1955 he left Scotland for Kenya, joining the East African Standard in Nairobi. The same year, he visited Seychelles for the first time, on holiday. In 1958 he married Juliette Mellon, a Seychelloise, in Nairobi, Kenya. He then spent 25 years working in newspapers throughout East Africa; he was Editor of the Mombasa Times and the Uganda Argus. In 1972, working with the support of the British Overseas Aid scheme, he set up the first School of Journalism in central Africa, at the University of Nairobi, serving as the Deputy and Acting Director. From 1980 he worked in the UK and Qatar on various newspapers before retiring to the Seychelles with his wife in 1994.

He is a UK citizen but was also naturalised as a Seychellois in 2016. He has lived in Seychelles for almost 30 years, residing at the family home in Glacis. (His wife Juliette passed away in 2011.) He is now in a care home at Ma Constance.

His work in researching, writing and publishing the history of the Seychelles started in 1980. His research took him to La Reunion, Mauritius, Paris, the British Library, Kew Gardens, Somerset House, Boston Whaling Museum, the archives in Seychelles, and many other places in-between. His research involved meticulous review of many thousands of documents, maps and reports, fact checking, translations, as well as examination of UK government papers, CIA reports and interviews with former politicians and civil servants. All his books are supported by extensive source notes and references. By reviewing UK cabinet papers and CIA microfiches (released after 20 years), he was able to reveal an accurate version of events and describe the underlying politics of the times in question. (He also translated many early documents from French to English).

He has been widely recognised as a leading authority on Seychelles history for many years. He has appeared regularly in interviews on television and in the national press, and his work is used as source material in reports and articles. He is approached on a regular basis by journalists, researchers and writers for his knowledge on a range of topics on Indian Ocean history.

The late Maxime Ferrari, in endorsing McAteer for an honour, said, “…[McAteer] is …well-known and respected locally. He has made a big contribution to our country, a contribution that will endure for many, many years. Perhaps, as with all work that expands human knowledge and understanding, for all time.”

McAteer is in the process of publishing his last book. The book covers the period of Seychelles history from independence to 2020, a turbulent period in the nation’s history.

The MBE from the Queen is a recognition of the permanent legacy McAteer has left for all Seychellois, by documenting the history of the islands. His last book will be dedicated “For Seychelles, my adopted country”. 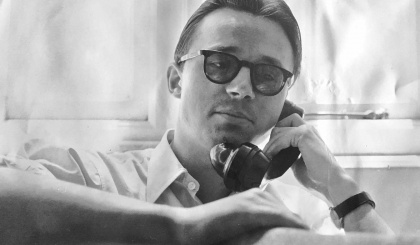 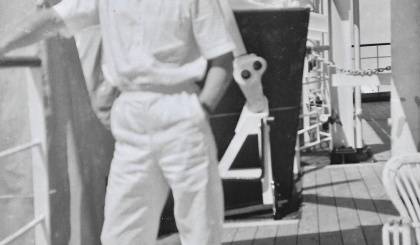 McAteer on the Dutch cargo vessel, Roggeveen, arriving in Seychelles in 1955