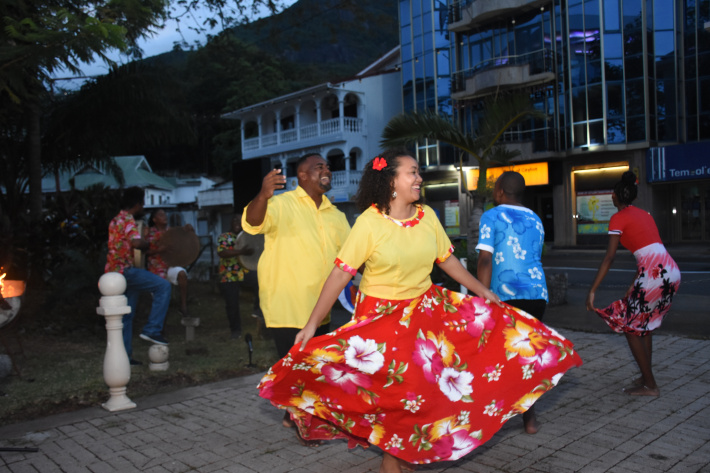 Seychelles’ ‘moutya’, a sensual dance with simple choreography, will earn more respect globally now that it has been inscribed on the representative list of Unesco’s intangible cultural heritage of humanity as a global treasure that must be safeguarded.

The decision came yesterday and Unesco (United Nations Educational Scientific and Cultural Organisation) announced the news on Twitter and it means ‘moutya’ has the same status as other music, such as reggae which was inscribed on the representative list two years ago.

A dance form created by African slaves and brought to the Seychelles in the 18th century, ‘moutya’ was among several nominations from a list of 48 that the Unesco evaluation team, made up of experts, had recommended to the intergovernmental committee for inscription on the representative list at its 16th meeting.

Late last month after attending at the 41st general conference of Unesco from November 9-24 in Paris, France, Mayor of Victoria David Andre, who also heads the Seychelles National Institute for Culture, Heritage and the Arts, said it was highly likely that ‘moutya’ would be inscribed on the representative list of the intangible cultural heritage of humanity.

This followed the recommendation made by the evaluation body for 2021 cycle to the intergovernmental committee for the safeguard of the intangible cultural heritage, which is meeting in Paris (from December 13-18, 2021), under the chairmanship of Punchi Meegaswatte, the secretary general of the Sri Lanka National Commission of Unesco.

The Seychelles government first submitted ‘moutya’ to Unesco in 2019, which initially rejected it citing a lack of information.

Work to establish safeguard measures for Seychelles’ traditional ‘moutya’ dance started in 2015 when stakeholders involved in protecting and preserving our national heritage took part in a session to prepare a nomination dossier for its inscription on the Unesco representative list of intangible cultural heritage of humanity.

The department of culture gained approval from the cabinet of ministers to repeal Regulation 115 of 1935 (Drums) Regulation, (Annex 1) and President Danny Faure signed the Statutory Instrument to repeal the regulation on August 30, 2018.

Originally performed around a bonfire, deep in the forest in the dead of night, moutya was an expression of resistance, allowing enslaved people to share their suffering and sing about the difficulties they faced, far from their masters' ears.

First, the drums ‒ the main instruments used ‒ are heated over a fire, before the drummers set the beat and men in the crowd call out various themes, usually social commentaries, to which the female dancers respond in high-pitched tones.

The men and women begin to dance to a moderate tempo involving hip-swaying and feet-shuffling. The dancers come close, but do not physically touch, with men holding out their arms while women ruffle their skirts in response.

Similar to its Indian Ocean counterparts such as the ‘sega’ from Mauritius or the ‘maloya’ from Reunion Island, moutya was promoted by the local authorities as they sought to forge a Creole national identity following independence in 1976.

Usually a spontaneously performed dance within communities, it attained official status over time as its improvisational quality gave way to staged events aimed at tourists.

‘Moutya’ was brought to Seychelles by the enslaved Africans who arrived with the French settlers in the early eighteenth century. They used to practise this dance at night in the forest, at a distance from the plantation house where their masters lived.

Historically, ‘moutya’ was a psychological comfort against hardship and poverty and a means of resisting servitude and social injustice.

‘Moutya’ continues to be a form of expression of cultural identity to this day, retaining its traditional dance form. It is usually performed spontaneously within the community, as well as at social gatherings and cultural events. ‘Moutya’ is transmitted informally through performance, observation and imitation and formally through research, documentation and dissemination.

The accompanying photos show scenes from the ‘moutya’ hour on August 30, 2020, commemorating the second anniversary of the repeal of Regulation 115 of 1935 (Drums) Regulation which banned the tapping of drums in Victoria and other locations on Mahé, Praslin and La Digue after 9pm.