Ms Serumaga is leading the delegation on a two-week mission in Seychelles.

During her mission, the delegation visited some projects being funded by the UNDP in the country.

The project at the Montagne Posée prison is being carried out by the Friends of Prisons. The US $50,000 project entitled ‘Greening the Prisons; Reducing the carbon footprint of the Seychelles’ prisons through energy efficient lighting, solar water heating and rainwater harvesting’, aims at assisting the Seychelles Prisons Services in its endeavour to ‘green the prison premises’. The project is expected to be completed by the end of this year.

Despite having undergone many phases in its implementation, i.e between 2016 and 2018, then 2019 and 2021 with many pauses along the way, the skilled inmates continued digging trenches around the prison perimeter to install new cables and efficient lighting systems.

In doing so, the project team at the prison came up with the brilliant idea to use the same lamp post to install the security cameras around the property.

All light bulbs in the cells and the administrative blocks have also been changed to LED.

In addition to the efficient lighting systems, four large water tanks with a capacity of 4000 litres were equally set up on the premises and are being used to collect rainwater and river water for gardening and cleaning.

Other tanks are being used to store potable water for use during the dry season.

“Despite suffering much delay to implement and complete the programme, I am satisfied with the great effort put in by all parties concerned to make this project a success,” said Lyndy Bastienne, the national coordinator for the Small Grants Programme (SGP).

The last component of this project will see the installation of two solar water heating devices on the roof of the women’s cells. The devices were officially handed over to the Prisons Services management team and the inmates by Ms Serumaga and the Friends of Prisons project coordinator, Hilda Chetty, in a short ceremony held on the prison premises.

This followed the viewing of a short video on the project processes and experiences shared by a former inmate, expressing his satisfaction of the works he and his fellow inmates have accomplished as they served their time incarcerated at the Montagne Posée prison.

“The UNDP is always committed to assisting human development in the countries we work with and we fully support successful rehabilitation programmes that promote alternative livelihoods to people who have served time incarcerated as this helps to strengthen the fabrics of our societies,” Ms Serumaga noted.

She further urged the women prisoners present to be strong while serving their time in prison but advised them that their lives do not end here. She encouraged them to turn their challenges into opportunities, to empower themselves and once they are free again, to go out there

In the absence of prison Superintendent Raymond St Ange, the Probation and Rehabilitation officer, Elsa Nourrice, expressed her gratititude to all the partners involved in the success of this project. These include the Seychelles Energy Commission, the Friends of Prisons Association, the participating inmates, the management and other prison staff, the consultants Marlon Montano and Didier and Best Way plumbing and of course the donor organisation the UNDP GEF Small Grants Programme.

“Through the processes many inmates were sensitised on the importance of energy efficiency and many have been empowered with life-long skills which will be useful for them in the future,” Ms Nourrice added.

The initial objective of the project was to help the Seychelles Prison Services reduce its carbon footprint by reducing its consumption of electricity, LPG gas and to some extent treated water by 20%.

“We saw instead towards the end of the project a decrease of a significant 48% in their energy bills. This is huge savings for the prison which as the inmate said in the video interview ; ‘this is money that can be used elsewhere as needed’. This will help improve the sustainability of the prison facilities in reducing greenhouse gas emissions through reduction of reliance on fossil fuel,” project and maintenance officer C.I. Adrienne noted.

Furthermore C.I. Adrienne said they continue to maintain their efforts in energy efficiency and green gas emissions at the prison premises and continue to create awareness with beautiful murals painted by the prison art team.

The accompanying photos show some highlights of the visit by the UNDP delegation to the Montagne Posée Prison. 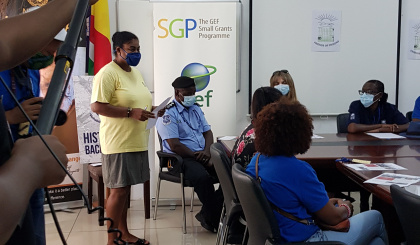 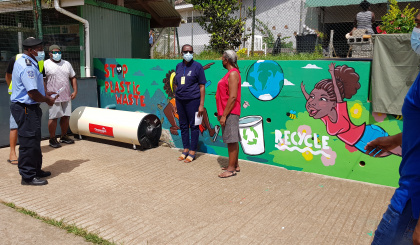