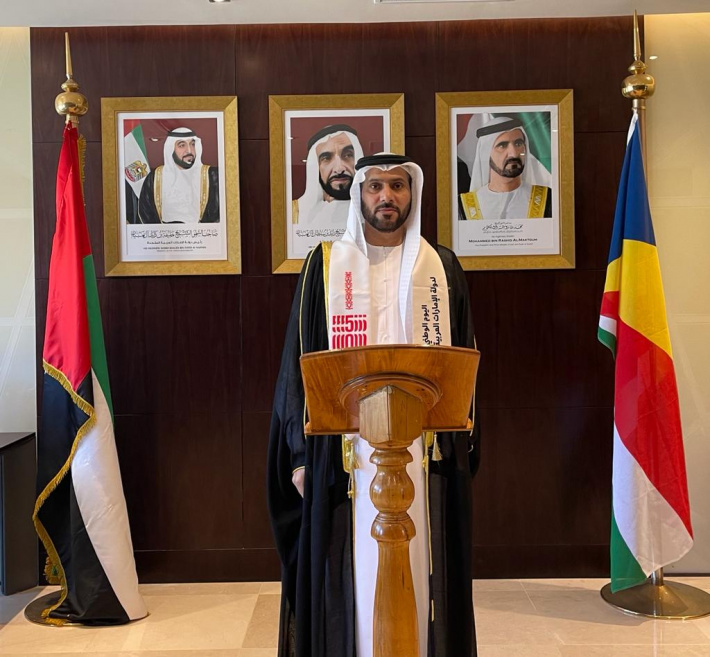 In his opening remarks Mr Alneyadi regretted the fact that the celebration of such an auspicious occasion had to bescaled down because of the persistent Covid-19 situation in the country thus preventing the President and other high-level dignitaries from gracing the event with their presence.

He went on to note that since the establishment of the UAE in 1971, the Ministry of Foreign Affairs and International Cooperation has played a major role in the foundation of the UAE constitutional institutions and its development.

“The ministry continues to promote good governance and convey the vision of its leadership, which emphasises greatly the values of human fraternity, global peace, conflict resolution through peaceful means and condemns human suffering regardless of gender and religious background.

The UAE puts a lot of emphasis on its cultural ethics which was built by its founding father Sheikh Zayed,” he pointed out.

Mr Alneyadi further stated that the UAE through its founding father Sheikh Zayed has underlined the values of tolerance, peace, and stability. His strategy and visions for his country is ripping the fruits he sowed for this great nation, which displays friendship towards all people, cultures, promotes moderate Islam and to work mutually, which is favourable for all nations. Countries must hence work together to build trust and understanding to tackle global challenges, eliminate divisions and distrust between nations and support international organisations to address challenges such as climate change, extremism, gender equality and education.

Mr Alneyadi went on to highlight the fact that the UAE has for the past decades bring its people closer together. Throughout 2020 and 2021, the UAE attained achievements in several areas at national, regional and international levels.

The Emirati women were placed at the forefront and partners in the development process that reaps successes with unparalleled determination.

“Emirati women have been an integral part in the most prominent achievements, the daughters of the UAE have played significant roles in various fields: they have demonstrated a great degree of capabilities and competencies, which qualifies them to lead and manage several key and vital projects in sectors such as: Advanced Science, Space, Energy and Health.

“Their role was embodied in the arrival of the ‘Hope Probe’ to the orbit of planet Mars.

“The beginning of the successful and safe operation of the first reactor at the Barakah Nuclear Energy Plant, and importantly, they have shown great leaderships and success both locally and globally, in their impressive efforts to tackle the Covid-19 pandemic.”

Mr Alneyadi detailed that in line with the UAE leadership’s directives and visionary stance, the Ministry of Foreign Affairs and International Cooperation, proactively invested in state-of-the-art technologies and established an advanced digital infrastructure to provide its customers with a range of electronic and smart services.

“There is no limitation when countries have the desires to work together for the global betterment, prosperity and for greater purpose. The UAE has been recording some high performance and ranking published through different economic indicators.”

He went on to remark that despite the challenges the world is facing due to the Covid-19 pandemic, the UAE was among the first countries in the world to open up and return life back to normal in the shortest time. Businesses have since then experience rapid growth. Due to its great performances, UAE was ranked first regionally and fourth globally in the Entrepreneurship Index and awarded the safest destinations for citizens and residents, published by the Global Entrepreneurship Monitor GEM - NECI for the year 2020.

“In the UAE vision of 2021 and the Centenary Plan 2071, the Ministry of Foreign Affairs and International Cooperation aims to attract foreign investments, through its global network of missions and embassies which is tasked to promote, encourage inbound and outbound investments, strengthen bilateral and multilateral economic interactions.

The United Arab Emirates firmly continues its role as a supporter and primary contributor to global efforts aimed at meeting the needs of people, reducing poverty, eliminating hunger, building development projects for all who need them, and establishing relations with the recipient and donor countries to achieve the 2030 sustainable development goals.

As we celebrate the Golden Jubilee, the future proves that the UAE will continue forward in standing by the just causes. The UAE has always sought to build bridges and play a positive role on both regional and global levels. Over the coming years, the UAE will strengthen this vision by continuing to play a positive role in improving cooperation and foster dialogue, diplomacy and constructive engagement.

Furthermore he pointed out that the opening of Expo 2020 Dubai on the first day of October 2021 marked the conclusion of five decades of achievements, marking the kick-off of the next fifty years. Never before has an edition of the international event hosted so many countries and brought together so many cultures, to work together to achieve so much good for the many people.

For his part the Minister for Foreign Affairs and Tourism, Ambassador Sylvestre Radegonde, extended heartfelt congratulations and best wishes from President Wavel Ramkalawan, the government and the people of Seychelles to His Highness Sheikh Khalifa Bin Zayed Al Nahyan, to the rulers and to the people of the United Arab Emirates for their continued progress and prosperity.

“The UAE has made tremendous progress in 50 years in every imaginable sector, transforming the country into what it is today: a global hub of excellence for innovation, investment, quality of life and people-centred development.

“On your 50th anniversary, we join you in paying tribute to the Founding Father of the Nation, His Highness Sheikh Zayed Bin Sultan Al Nahyan. His vision and his legacy continue to inspire the people of the United Arab Emirates and continue to drive you to yet greater achievements.

“EXPO 2020 illustrates this perfectly. With 192 participating countries, it is truly a global event and the first really global gathering since the start of the pandemic in 2020,” Minister Radegonde highlighted.

“I had the privilege of attending the Seychelles National Day celebrations at the EXPO last month in Dubai. It was an unforgettable experience!

“Besides EXPO 2020, your achievements in sustainable development and renewable energy as well as in mitigating climate change have been recognised worldwide. All the more reason for the UAE having been selected to host COP28 in 2023! Please accept once again our sincere congratulations!

“Turning to our bilateral relations, the bonds of friendship and cooperation between us are built on solid foundations. They go back several decades. They are based on mutual respect, trust, shared values and personal ties between our respective leaders. Excellent as they are, we can develop them further. Explore other avenues of cooperation. Take them to new heights.

“The government of Seychelles deeply appreciates the invaluable cooperation of the UAE government in various socio-economic projects in Seychelles. They have made, and continue to make, a profound difference in the welfare and quality of life of our people.

“They are too many to mention here today. But I would single out one of the most recent ones: the hospital on La Digue. On behalf of the government of the Republic of Seychelles, I offer my heartfelt gratitude to the UAE for the decision taken to finance the new state-of-the-art hospital on La Digue.”

Minister Radegonde went on to thank the government of the United Arab Emirates for the donations of Covid-19 vaccines to Seychelles.

“The UAE has been a true friend to Seychelles, all the more so during those challenging times,” he stated.

The accompanying photos show some highlights of the virtual ceremony. 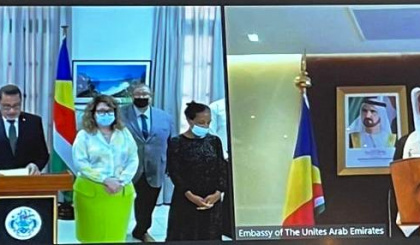