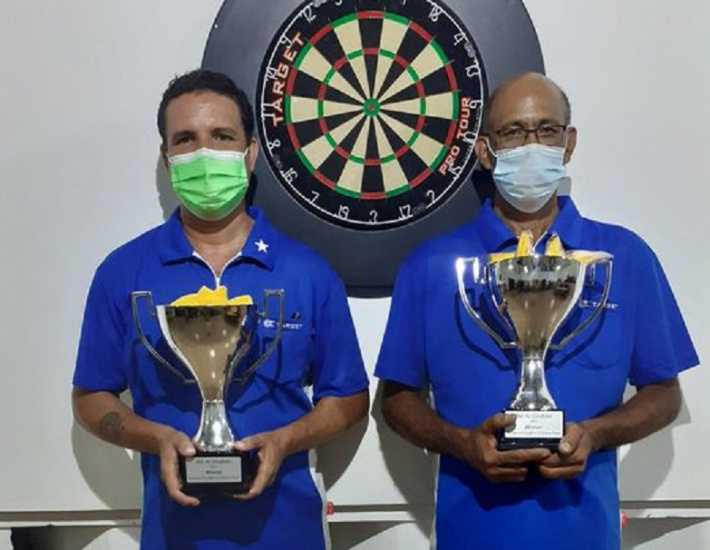 In the final, the duo of Paul Vidot and Terrance Hallock collected a 7-3 win over the team of Marc Pouponneau and Edmond Azemia who had won the first doubles competition of this year.

Paul Vidot and Terrance Hallock eliminated Charles Armanate and Collin Esparon 4-3 in the quarterfinal before dispatching Hans Radegonde and Reuben Port-Louis 6-3 in the semifinal.

Losing finalists Marc Pouponneau and Edmond Azemia eliminated the female pair of Monia Delpeche and Josette Domingue in the quarterfinal to set up a semifinal showdown with Nichol Esparon and Bernard Berlouis. They edged the Esparon/Berlouis duo 6-5 to book their place in the final.

It is to note that the Esparon/Berlouis duo were the winners of the National doubles competition played earlier this year.

Hans Radegonde and Reuben Port-Louis eliminated Patrick Radegonde and female newcomer Nicole Louise 4-1 in the quarterfinal before losing to the eventual winners in the semifinal.

They then beat Nichol Esparon and Bernard Berlouis 6-4 in the third place playoff match.

Meanwhile, the next competition on the Seychelles Darts Association’s calendar is the Bel Air Singles Open slated for Saturday December 4 at Bel Air social centre. Registration will start at 1pm and the competition proper will begin at 1.30pm.