‘Omicron variant has not been detected in Seychelles’

The omicron variant, detected in South Africa and several other countries, has not been detected in Seychelles.

This transpired in the two and a half hour virtual meeting of the Platinum Committee of the national Covid response chaired by President Wavel Ramkalawan on Sunday.

Nonetheless, in the face of a clear increase in the number of new Covid cases during the month of November 2021, a string of new measures will come in force immediately to help dent the rise.

“The country cannot afford another surge and other crippling effects on our economic activities. This is what will unavoidably happen if we allow the number of new Covid cases to rise. Therefore, we must take all measures necessary to prevent a new economic downturn,” said the President.

“Persisting illegal gatherings in public car parks and around bars and cafeterias and other places of entertainment are clearly contributing to the increase in new cases,” said the Public Health Commissioner Dr Jude Gedeon.

As well as clamping down on irresponsible behaviour, the Platinum Committee noted the approach of Christmas and the expected shopping sprees during the festive season. Therefore, it has been decided that grocery stores will now close at 8pm as from December 1. Closer to Christmas shops will close at 9pm. This will contribute to preventing congestions in these stores.

The Committee reiterated the need for the public to follow all the public health measures and not to be complacent.

It called on the members of the public to get their booster dose now that a new consignment of 40,000 doses of the Pfizer-Biotech vaccine is expected in the country during the month of December.

Also in attendance were the Attorney General, the Chief of Defence Forces, the Commissioner of Police and senior officials of the Ministry of Health.

Press release from the Ministry of Health 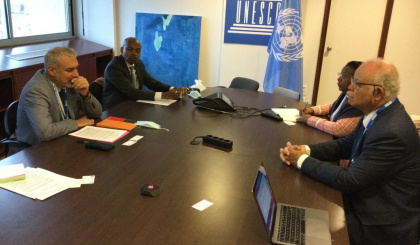