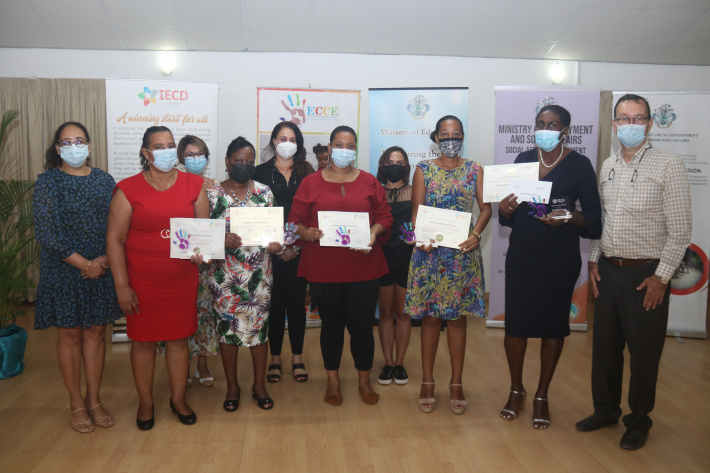 The five advocates in a souvenir photograph with guests

They were rewarded in recognition of their hard work, devotion and contribution of their fair share in their own special ways in helping to build the resilient ECCE system. This was in relation to their crucial roles and attributes to ensure that our young children continue to enjoy their rights and that the country fulfils its commitment towards the United Nation Convention on the Rights of the Child.

The ceremony was also an occasion for the institute to launch, for the first time, its new ECCE podcast series.

Present were principal secretaries, IECD management and staff, including board members, sponsors, among other guests.

Apart from the awards, the awardees also received cash prizes and a certificate of recognition.

The five recipients said that they were happy to have been recognised for their efforts and contributions and vowed to continue along the same line to advocate for children.

With regard to the ECCE podcast, it is an additional tool to IECD’s communication strategy to sensitise stakeholders, partners and the general public on ECCE.

The podcast explores meaningful topics and stories relating to ECCE and features various professionals, practitioners and individuals in the sector.

There are four episodes in the inaugural series with the first one comprising a round table on the progress of projects in the national action plan 2021-2022. This episode along with the three others, are available on the IEDC website www.iecd.gov.sc

In his opening remarks, the chairman of IECD, Captain David Savy, said that the five recipients have helped to build the resilient ECCE system – recognised as a model of good practice by the Unesco, World Bank among other organisations and countries.

He noted that they, along with other personnel affiliated with ECCE, are the voices for early childhood development and forms part of the solutions to ensure the holistic development of young children and they must be recognised and valorised for their dedication, influential role and great contribution in ECCE.

Captain Savy added that children's holistic development is the raison d’être for the IECD’s ongoing and persistent efforts to improve access to quality early childhood services and programmes for the benefit of young children.

“It is rare to come across people who are so passionate and dedicated. Your work ethic and involvement in ECCE are admirable, and we are fortunate to have you onboard our big ECCE family,” said Captain Savy, who noted that these professionals have demonstrated to IECD their worth as true advocates for ECCE.

Speaking on the ECCE podcast, Captain Savy said that it is a milestone to the institution that has been developed in line with the institution’s mandate to advocate and promote the importance of and best practices in ECCE to all partners and stakeholders.

Since its legal establishment in 2014, the IECD has worked on diverse initiatives, such as the International Biennial Conference on ECCE in collaboration with Unesco, ECCE awareness campaigns such as the promotion of national standards and installation of billboards conveying targeted messages, My First Step TV series, to name a few. These projects have been fundamental in supporting the institute’s mission to provide every child with ‘A Winning Start’ and advocating the importance of early childhood development.

“I do hope that many will appreciate this new praiseworthy initiative, the first of its kind in government, and help advance awareness of the pivotal role of ECCE and propel the advocacy strategy to the next level,” he said.

During the ceremony, Grankaz Casino, represented by Shama Amesbury, donated a cheque for R50,000 to IECD. The money was for the institution’s ‘Assessment of Early Readiness of Children’ programme for children in non-registered childcare services and those in residential homes to enter crèches and pre-schools and for organisation of the ceremony. It was chief executive Shirley Choppy who accepted the cheque on behalf of IECD. She thanked Grankaz for the donation.

The ceremony was animated by local singer Joe Samy and Ms Simeon who recited one of her poems, titled ‘Mersi pour sa ki mon ete’, a copy of which was presented to Mrs Choppy by her two daughters as a token of appreciation for the time she spent at IECD under Mrs Choppy’s guidance. Ms Simeon will be leaving soon to take up another job.

Text and photos by Patrick Joubert 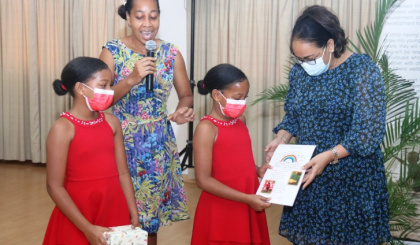 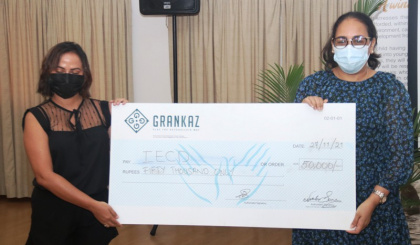