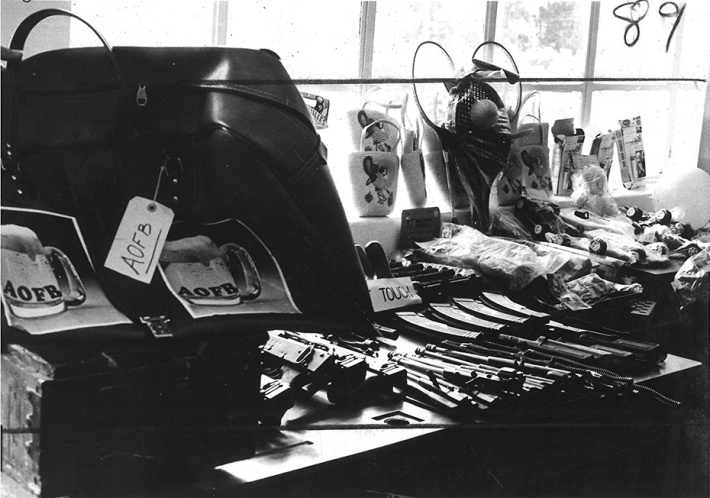 It was Wednesday November 25, 1981 at about 4.30pm when the Royal Swazi National Airways, a chartered flight, arrived at the Seychelles International Airport with 45 mercenaries onboard including their leader Mike Hoare, starts off historian Tony Mathiot.

The infamous Irish mercenary, also known as ‘Mad Mike’, was leading a band of merry men and a woman (Susan Ingle), masquerading as a beer-drinking tourist party ‘Ye Ancient Order of Froth Blowers’.

The majority of the mercenaries were South Africans ‒ understandable given the attack was backed by the apartheid South African government of the time ‒ but some of the other nationalities were Portuguese, Scottish, Zimbabwean, Yugoslav etc.

In their dummy bags were toys for the children of Seychelles as well as some medicine to help the country deal with a conjunctivitis outbreak ‒ and much lower in the bags, in secret compartments, were firearms meant for a coup.

Outside of the terminal, waiting for the 45, were six other mercenaries who had arrived in the country at an earlier date.

“They were going through customs; everyone was being processed normally up until a passenger of the same plane but who was not involved with the mercenaries was found with a variety of fruits on his land luggage. As customs were very strict on these, the passenger was questioned and the fruits were seized to be destroyed. This made the customs officer a little bit more wary of the other passengers in case they had more fruits with them. When he searched the bag of one of the mercenaries, he found that his hand did not reach the bottom of the bag. He asked the mercenary why his bag was only half full and the man simply replied that he had bought the bag that way,” explains Mr Mathiot.

“The customs officer ripped the bottom to find himself face to face with an AK47 and passes it on to the sergeant nearby. The mercenary was tense at the point. In the parking, the six mercenaries were already helping their colleagues place their bags on the bus. Inside, the mercenaries find that they have been caught and start removing their guns from their bags. Mike Hoare decides the airport is as good a place as any to undertake his coup. One of the mercenaries aimed his gun towards the customs officer, missed and hit one of his mercenary friends instead.” Johan Fritz was the first person to die that day.

The customs officer ‒ 26 years old at the time ‒ rushed out to inform security guards nearby and fled towards the police station where he informed the police officers.

Behind him, chaos ensued at the airport as the mobilised Seychelles People’s Defence Forces (SPDF) and Tanzanian army officers faced off in a shootout with the mercenaries.

“The mercenaries made an attempt to breach the military barracks at Pointe Larue but the army, including the Tanzanians, forced them back. The SPDF deployed two armoured vehicles, tanks to the airport and around six of the mercenaries outside of the airport saw that the mission was not going according to plan and fled the site and hid,” continues Mr Mathiot.

“The breaking news was that mercenaries were at the airport and all you could hear from town was ‘boom, boom, boom’ from the active shootings. One of the mercenaries called out at the armoured vehicles not to come into the airport or else they would die so one of the armoured vehicles retreated but the other one, driven by Second Lieutenant David Antat kept going and one of the mercenaries threw a Molotov cocktail which set the vehicle ablaze. Antat died,” adds Mr Mathiot.

The night falls, the airport is still under siege but the mercenaries are quickly realising that their attempt to overthrow the Rene government was failing and failing badly.

At the same time, an Air India flight from Harare stopping over as usual for fuel, before continuing its route to India, landed at the Seychelles International Airport.

The Seychelles government announced a curfew in order to apprehend the six mercenaries that had fled from the airport.

“There was a hunt for them over the course of several days until they were caught, jailed and put on trial. Four of them received death sentences for treason ‒ Bernard Carey, Aubrey Brooks, Roger England and Jeremy Puren ‒ which was strange because death sentences had been abolished since 1966.”

“Another was sentenced for 10 years and, the most particular case, was sentenced 20 years. The latter was the more popular mercenary of the group, his name was Martin Dollincheck.”

The mercenaries were later deported to South Africa following negotiations between the Seychelles and South African governments and the payment of around £3 million. They also received presidential pardon from President Rene.

But how was the mercenary attack supposed to have gone down if they had not been caught red-handed on the airport?

“They came as the ‘Ancient Order of Froth Blowers’ and had made their bookings to stay at the Reef Hotel. At the Reef Hotel, the waitress had already set up their tables ‒ there was to be a beer convention the next day,” explains Mr Mathiot.

It is said that the mercenaries also carried a recording of a speech by President James Mancham, which was to be broadcasted on the radio once the coup to overthrow the usurper, France Albert Rene, and his party from power had been a success.

“There had been preparation for the 1981 coup since 1978, directly after the coup d’Etat. The Seychellois who were in exile were trying to find a way to get back, particularly those in South Africa.”

Mike Hoare, who was an experienced mercenary and knowledgeable in guerilla warfare, conducted two reconnaissance trips to Seychelles before the mercenary attack ‒ once in September 1978 and the second time in June 1980.

“He came in 1980 to attend the 5th June parade. He knew that this was when the country would parade out its military arsenals, its platoons, its armoured vehicles, land-to-air missiles.”

“On June 5, Mike Hoare enters the stadium, gets upon the grandstand and sits right next to the high dignitaries. God knows how he did this ‒ he sat down next to the Russian Ambassador of that time. Albert Rene is seated close by with his security guards. Mike Hoare observes everything that is going on and takes photographs of everything. Everyone thinks he has been invited. He also has a good memory and recorded everything in his mind. After that he goes back to South Africa and starts preparing for the 1981 coup.”

“For the coup itself, the mission was supposed to target the SPPF party congress. When Albert Rene, the ministers and other higher ups in the party were assembled in the building, the mercenaries would have stormed in and taken all of them hostage and taken control of the country.’