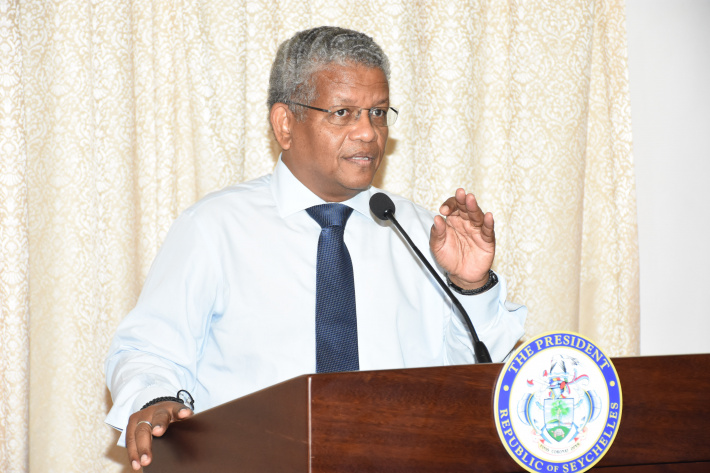 Following their exploit at the recently held Prime Minister Mahinda Rajapaksa Trophy in Colombo, Sri Lanka, members of the Seychelles football national selection were received at State House yesterday by President Wavel Ramkalawan who personally congratulated them for flying the country’s flag high.

Led by the president of the Seychelles Football Federation (SFF) Elvis Chetty, members of the national selection were welcomed in the presence of Minister for Youth, Sports and Family Marie-Celine Zialor, principal secretary for youth and sports Ralph Jean-Louis and Sri Lankan high commissioner to Seychelles, Srimal Wickremasinghe.

President Ramkalawan, who is also the patron of Seychelles’ football, congratulated the selection for the sense of devotion, patriotism and especially discipline both before and during the tournament.

He noted that their achievement has brought about a new sense of inspiration for local youngsters, not only in football, but in sports in general.

President Ramkalawan added that it is sports that brings everyone together as a nation, nurturing the culture of togetherness and patriotism among the population.

He said for us to progress further as a nation, we need to focus more on grooming our local players, allowing them to take crucial positions at club level, instead of bringing in foreigners.

This, he said, will ensure progress, as well as guarantee quality players when it comes to calling up a national selection.

For the continuous progression of local sports, including football, President Ramkalawan, on behalf of the government, pledged full support towards sports development programmes.

Through High Commissioner Wickremasinghe, President Ramkalawan seized the opportunity to thank the government of Sri Lanka for the invitation and opportunity.

Addressing the national selection, Minister Zialor said merely after launching the ‘Bring the first Olympic medal home’ initiative, it is interesting to see that local athletes are already bringing gold medal and cups back home.

This, she said, is proof of a good vibe happening around.

Coached by Vivian Bothe, Seychelles finished the tournament unbeaten with two draws against Bangladesh (1-1) and Maldives (0-0) and a win against hosts Sri Lanka (1-0) to finish top of the group.

In the final, Seychelles trailed 0-1 early in the match after Marvin Hamilton’s long free kick took a deflection off defender Don Fanchette to fly into the net. They managed to equalise with a header by Hubert Jean on the stroke of half-time.

Seychelles gave away another goal in the 50th minute as Mohamed Aakib volleyed into the roof of the net for a 2-1 score.

Qatari referee Mohamedh Alshammari gifted Sri Lanka as Waseem Razeek threw himself to the ground from inside the penalty in the box to con the official and he then picked himself up to shoot past goalkeeper Alvin Michel to make it 3-1.

Substitute Elijah Tamboo pulled a goal back to make it 3-2 in the 82nd minute and scored another later after skipping past goalkeeper Perera to slide the ball home to bring the score level at 3-3 and send the game into a penalty shootout.

The Seychellois players who took part in the competition are: 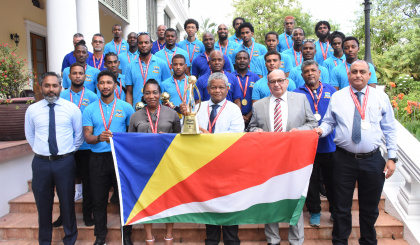 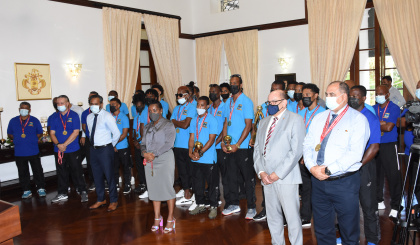