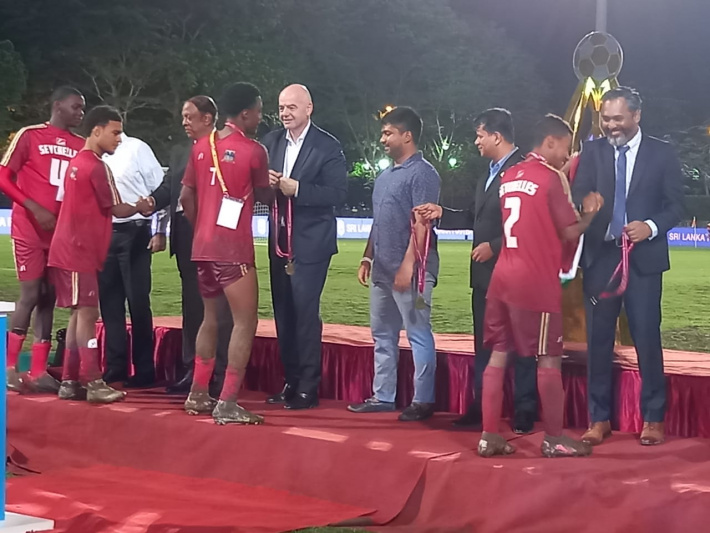 Seychelles Football Federation (SFF) chairman Elvis Chetty was also in the stands supporting our country’s team and he later joined the delegates to hand over the medals to the players.

After conceding an early goal from a long range free kick by Marvin Hamilton which took a deflection off defender Don Fanchette to make it 1-0, Hubert Jean equalised for Seychelles on the stroke of half-time with a header to make it 1-1. But our team gave away another goal in the 50th minute as Mohamed Aakib volleyed into the roof of the net for a 2-1 score.

Qatari referee Mohamedh Alshammari gifted Sri Lanka as Waseem Razeek threw himself to the ground from inside the penalty in the box to con the official and he then picked himself up to shoot past goalkeeper Alvin Michel to make it 3-1.

Down but not out, the Seychelles team against all odds pulled a goal back in the 82nd minute as substitute Elijah Tamboo saw his shot sail over goalkeeper Sujan Perera for a 2-3 scoreline.

Tamboo then levelled the score as he skipped past goalkeeper Perera to slide the ball home for a 3-3 score at the final whistle and the match went straight to penalties.

Goalkeeper Michel was the hero as he saved two penalties while Hubert Jean, Elijah Tamboo and Jean Yves Ernesta scored to propel Seychelles to their first triumph on away soil and this victory sparked scenes of celebrations on the field before the players and management were handed their winners’ medals by Fifa president Infantino. Captain Ian Ah-Kong, who did not take part in any matches as he underwent a knee operation in Sri Lanka, and vice-captain Benoit Marie received the trophy from the Fifa boss.

Coach Vivian Bothe was proud of his team’s achievement and said this is just the start of the good work from a group of players who are ready to make sacrifices and they have reaped their due reward.

Seychelles team were the only unbeaten side in this tournament earning draws against Maldives (0-0) and Bangladesh (1-1) and defeated Sri Lanka on a 1-0 score in the group stage to finish top of the group. 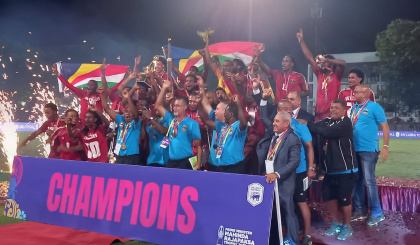 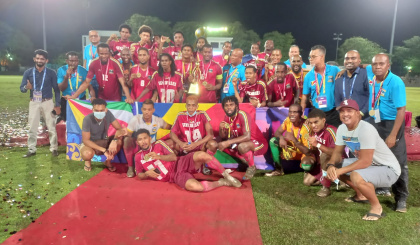