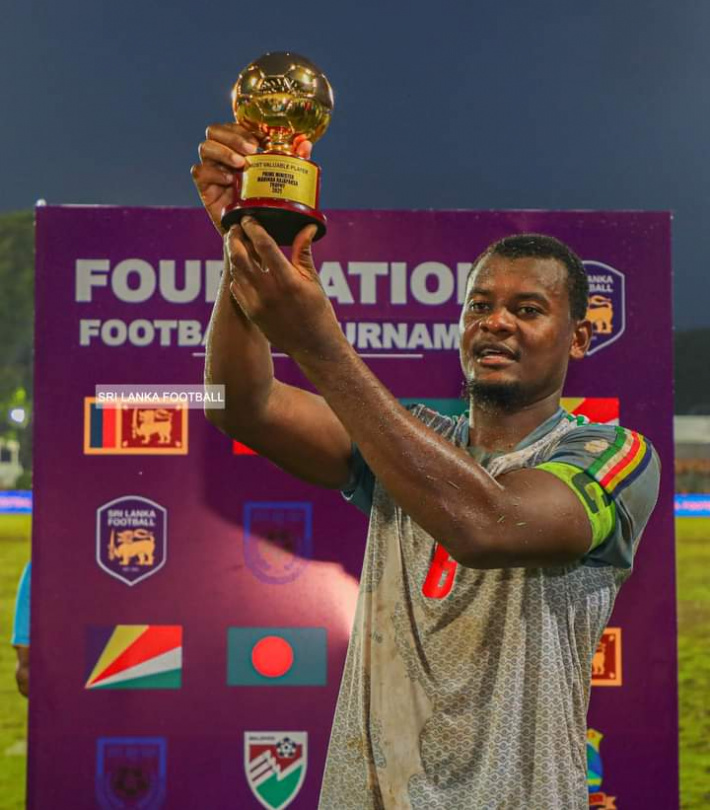 Seychelles play out goalless draw with Maldives to reach final

The Seychelles senior national maintained their unbeaten run in the Prime Minister Mahinda Rajapaksa’s football tournament with a 0-0 draw against the Maldives at the Race Course stadium on Tuesday afternoon to reach the final.

There were scenes of jubilation in the Seychelles camp after the final whistle before they start preparing for the final against either Bangladesh or Sri Lanka.

The Maldives had all to play for as they had only point from two matches after entering this tournament as the favourites to lift this trophy.

Therefore, they started on the front foot on a muddy pitch affected by the heavy rain and they went close in the 28th minute when Ali Ashadh curled a high ball but goalkeeper Alvin Michel turned it over the crossbar into corner.

Seychelles, who had to defend for long periods, made a tactical switch as they pulled off Jean-Yves Ernesta who never got going and in came Elijah Tamboo who put some pressure on the Maldivian defence.

However, the Maldivians had the edge and in the 36th minute, Mohamed Hamza latched onto a ball at the back post but his header was pushed out but the danger was still present as the ball broke to Nihaan Hussein who look odds on to score but he was snuffed out by a rugged Seychelles defence.

Seychelles had their first shot at goal a minute later as captain Benoit Marie linked up with Dean Mothée and his 20-metre drive was smothered by Maldivian goalkeeper Shafeeu Mohamed for a scoreless first half.

The Maldivians tried to raise the tempo in the second period and in the 49th minute Umair Mohamed tested goalkeeper Michel with a wicked shot but the Seychelles custodian was equal to the task.

The local team rode their luck in the 55th minute in a rare slip up as Hamza burst through but his shot produced a top drawer block from goalkeeper Michel and the loose ball fell to Hussein who blazed the ball over the crossbar.

On the hour mark, Brandon Labrosse went on a slalom run as he left two defenders in his wake to flash a ball across the Maldives goalmouth but there was no one to apply the finishing touch as a goal scoring opportunity went begging.

It was the last contribution for Labrosse as he was substituted along with Mothee by Hubert Jean and Randolph Elizabeth but our team suffered a major setback in the 75th minute as Juninho Mathiot, who a had a solid game, was shown a second yellow card for a high tackle on Abdulla Asadhulla who was racing on goal as he took a card for the team which left our players with ten players.

However, the Seychelles team remained unfazed as they played their hearts out to nullify any threat and frustrate the Maldivians who had Ali Ashadhi sent off in added time with a straight red card for a cynical elbow on captain Benoit Marie in an off-the-ball incident spotted by Sri Lanka official Nivon Robish.

Seychelles nearly snatched a late winner as Jean set up Elizabeth who was one-on-one with goalkeeper Mohamed but the retreating defence thwarted him but our players had managed to see off the challenge of their Indian Ocean neighbours to progress to their first final in ten years since the Indian Ocean Islands Games in Seychelles in 2011 where the current head coach Vivian Bothe served as assistant to head coach Ralph Jean-Louis as they led Seychelles to the gold medal.

Coach Bothe admitted after the match to the press that it was a tough match but was happy his team stayed focused to make it into the final.

“It was a really difficult encounter against a decent opponent who had come all out to win but my players kept their discipline and though the state of the pitch made things more of a problem, we remained concentrated and I’m very happy that we have made it to the final,” the Seychelles head coach told the media.

Captain Marie, who led by example in the middle of the park, was voted man-of-the-match and he thanked his teammates for playing as a unit to see off their opponents and he also praised the camaraderie that reigns in the team which is the springboard for their positive results in this tournament.